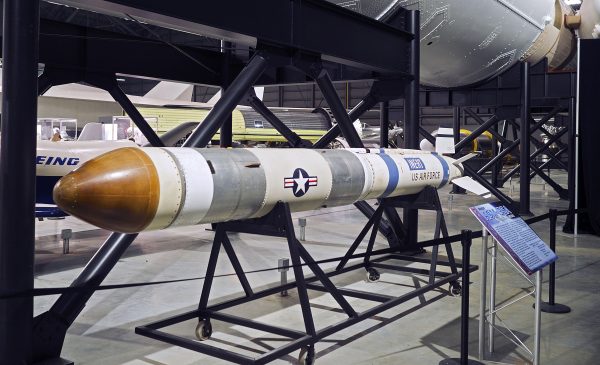 How Much Longer Can Space Remain Demilitarized?

As access to space becomes easier and space-based assets cheaper, the prospect of demilitarization is bleak.
Last week, I argued that the global arms control system has seen better days, with accelerating nuclear modernization, conventional arms proliferation, and the rapid development of new categories of weaponry all occurring in a context of ever-sharper nationalism.

There is one area that has, until now, remained mostly regulated and peaceable: space. The Outer Space Treaty, which entered into force in October 1967, restricted the placement of weapons of mass destruction in space and declared space a global commons, freely accessible to all nations and governed by technical agreements to ensure safety and accountability.

By and large, the treaty has accomplished those goals: Various Cold War plans to place nuclear weapons in space came to naught, and even as rearmament gathers pace, today’s military space platforms are almost entirely used for reconnaissance, navigation, and communications.

That is not to suggest that there are no space weapon capabilities waiting in the wings. The United States and Soviet Union both worked on anti-satellite (ASAT) weapons starting in the 1960s; the U.S. successfully tested an aircraft-launched ASAT in 1985 and demonstrated an anti-satellite capability with a missile launched from a guided-missile cruiser in 2008. China, India, and Russia have also demonstrated similar capabilities using land-based platforms.

The idea — well-covered territory in both policy documents and fictional depictions of 21st-century great power conflict — is that using ASATs in the early stage of a conflict could blind and confuse an adversary either as an end in and of itself or to enable freedom of action by earthbound military formations.

But there are good reasons to be wary of casually destroying satellites. Many of those reasons come down to physics. Blow apart an object orbiting the Earth and it doesn’t simply vaporize or fall harmlessly to Earth; instead, it creates a cloud of debris zipping around the planet so fast that even a tiny piece can cause catastrophic harm to anything it encounters.

This is the principle that served — in exaggerated but not wholly fictional form — as the narrative driver of the film “Gravity.” And depending on their orbital altitude, the hazards of such debris remain for months or years after, continuing to imperil all uses of the Earth’s orbital neighborhood long after the conflict has ended.

Physics, of course, is unchanging; the space debris problem will remain regardless of technological or political developments. But another predicate of the demilitarization of space is changing, and rapidly.

To the extent that there was a detente in space, it was predicated in large part on the idea that satellites are almost impossibly rare and expensive assets; and that thanks to the dictates of physics, everyone’s were equally vulnerable. While cost estimates — and capabilities — are highly classified, one early-2000s American spy satellite broke into public awareness when members of Congress criticized its cost: nearly $10 billion.

And despite their veil of secrecy, the real-time location of such satellites can be tracked by any hobbyist with a clear view of the night sky and a decent pair of binoculars. Even the world’s superpowers do not have the resources to build a fleet of spy and communication satellites, a sufficient force of ASATs to knock out their adversaries’, and a backup fleet of satellites to replace casualties.

But the cost of launching mass into Earth orbit, which has remained stubbornly high for the bulk of the space age, is beginning to fall as launch systems become more reliable and reusable. Just last week, an American startup company demonstrated an autonomous “first stage” aircraft, which would fly to the upper atmosphere on normal jet engines, from which point a small and relatively cheap rocket booster would suffice to carry a payload into orbit.

Developments like this, combined with ever-cheaper and more efficient batteries, solar panels, communications arrays, and sensors, demonstrate the possibility of building — and crucially, rebuilding — space-based observation, navigation, and communication networks on the fly.

There are many reasons to be optimistic about such a development (though there are some serious unintended consequences as well). But it also changes the incentives to remain bound by the strictures of the existing balance of power in space, and at a time when states with mature space programs are becoming increasingly (though not necessarily realistically) ambitious in their commercial and strategic goals for spaceflight.

A state capable of rebuilding its crucial space-based networks rapidly and cheaply has much less to fear from beginning an escalatory spiral than one whose rare, expensive satellites are held in the balance of terror with a similarly disposed adversary.

Under the current geopolitical circumstances, a wholesale update to or replacement of the Outer Space Treaty is unlikely – and might indeed produce a less optimistic vision of a shared commons above us than the agreement currently in force. Instead, it might be best if we reminded ourselves that even as we get better at exploiting physics that the same forces are immutable and do not care for our geopolitical ambitions, and proceeded with appropriate caution.
Add Comment