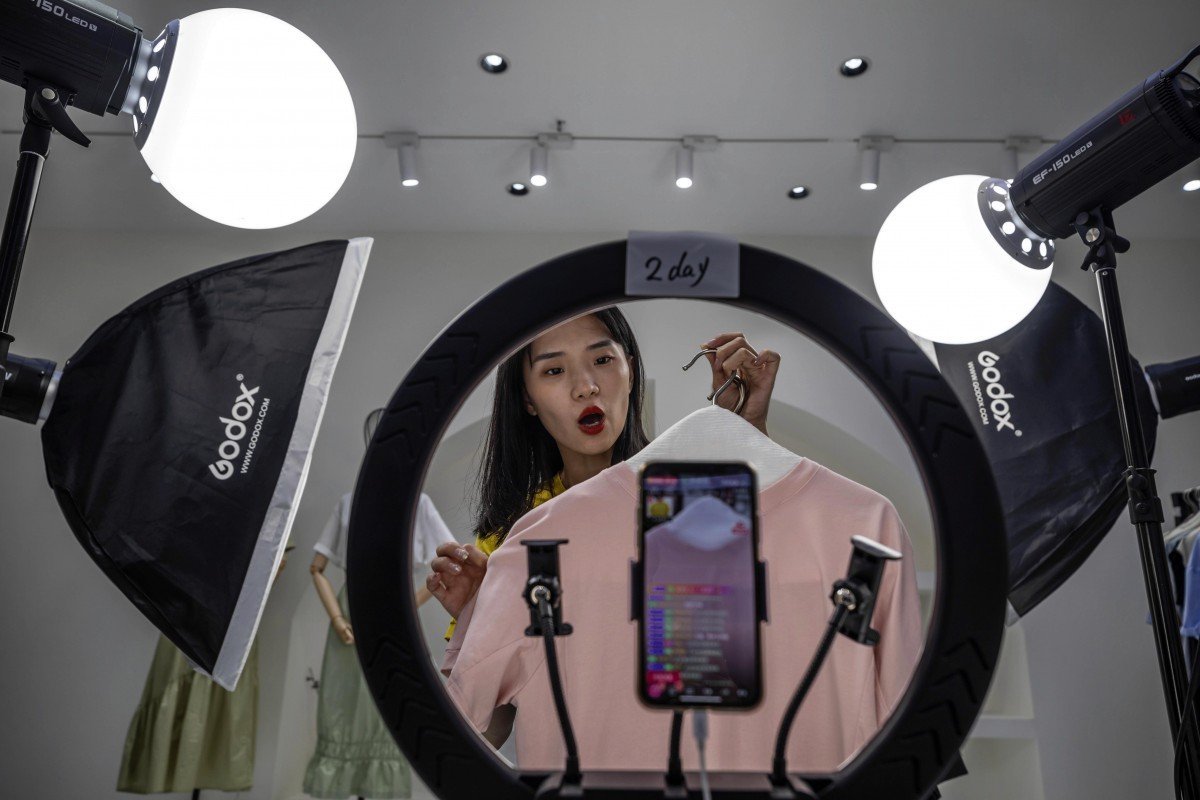 It is an ‘open secret’ that viewer counts and virtual gifts on live streams are often generated by fake accounts, experts say.

In 2018, when China’s live-streaming industry was growing at lightning speed, Huang Xiaobing felt her one-year career as an online live broadcaster had hit a bottleneck.

So she decided to start her own agency in the northern Chinese city of Tianjin focusing on entertainment live-streaming, managing online broadcasters who sang, danced or chatted with audiences in return for virtual gifts that could be converted to money, with the agency taking a cut.

In her new role, she helped the aspiring live-streamers gain popularity in the crowded online space. One of the common ways to achieve this was to buy virtual gifts for live-streamers under the guise of real viewers to boost their apparent popularity, tricking the platforms’ algorithms into pushing these broadcasts higher up on recommendation pages.

“The agency would spend around 3,000 to 5,000 yuan (US$456 to US$760) to fill the chat room screen with virtual gifts,” said Huang, whose agency managed and trained up to 40 influencers at its peak before she left the industry last year to be a stay-at-home mother.

According to Huang, live streams may need to multiply their actual viewer counts by 10 to 50 times to get a spot on the main recommendation pages on platforms, where they have a higher chance of attracting the eyeballs and spending of real users. To maximise returns, Huang said her agency did not do this for every live-streaming session but instead selectively spent money on fake viewers and virtual gifts for the broadcasts it felt had the most potential to make big bucks.

“Everyone in the industry does this one way or another,” said Huang, who added that platforms themselves also sometimes artificially inflated numbers so it appeared that more people were watching.

The issue of fake user traffic in the live-streaming industry became the centre of a controversy after US short-seller Muddy Waters accused Chinese social media firm YY of using bots to inflate viewer numbers and send live-streamers virtual gifts in “a multibillion-dollar fraud”. Up to 90 per cent of live streaming revenue from YY’s live-streaming platform, YY Live, is fraudulent, Muddy Waters claimed in a report last week.

YY, for its part, has refuted the short-seller’s claims, saying the report “lacks a basic understanding” of China’s live-streaming business and its metrics are “commonly used” by the industry.

Analysts told the Post that fake traffic was an “open secret” in the internet industry, not just in China’s booming live-streaming sector – which is projected to be worth 310 billion yuan by 2024 according to consultancy firm Frost & Sullivan – but also on global social media platforms such as Facebook and Twitter.

“Fake traffic is not even an unspoken rule, but a widely known issue that not only the live-streaming sector but also the whole internet industry at home and abroad is trying to address,” said Zhang Dingding, an internet industry commentator and former head of Beijing-based research firm Sootoo Institute.

“I don’t doubt the existence of fake users, but the key questions are who is behind the fake traffic and whether Muddy Waters’ estimates are reasonable.”

Aside from elevating the broadcast’s rank on recommendation pages, Shanghai-based influencer marketing platform Parklu said that live-streamers may be motivated to drive up sales numbers because of the commission they make from brands – usually about 20 per cent. They may, for example, use bot controlled accounts to buy products with their own money and return up to 50 per cent of the items afterwards, pocketing the commission, the platform said.

“[Bot traffic] has been used by everyone from the big tech companies down to the smallest KOLs (key opinion leaders),” said Parklu chief marketing officer Elijah Whaley. “Everybody’s using fake traffic to some degree because that’s how you trick algorithms, people and brands. That’s kind of an old practice that’s just been adopted into the industry that works on several layers.”

However, it’s only the large agencies that can really make it work. “It really takes a multi-channel network with tons of live-streamers to make the model viable,” said Whaley. Even if they were making less profit on each streamer, “they don’t care because they are streaming for eight hours a day for 100 live-streamers”, he added.

“I‘m a sceptic, so I’ve always assumed more than 20 per cent of live-stream traffic is questionable,” said Michael Norris, a research and strategy manager at Shanghai-based consultancy AgencyChina. “In terms of fake orders, my experience is you can only tell post-facto by seeing the return rate. Obviously, return rates that exceed your store average should be treated as suspect. Better to be suspicious and cynical than sorry.”

During the recent Singles’ Day shopping festival, the China Consumer Association received over 334,000 complaints related to live-streaming e-commerce, many of them related to fake traffic and orders, it said in a report last week.

One listing on the platform offered 100 bot viewers at 50 yuan and 30,000 likes at 5 yuan in total for live stream sessions on ByteDance ’s Douyin, TikTok’s sister app in China. For 20 yuan, customers could have fake transaction alerts – which typically appear ﻿on the screen when a purchase is made – pop up on their live streams every three to five seconds for three hours, giving the impression that many people were buying.

But Chinese regulators are catching on to such practices and tightening rules for the industry. Earlier this month, the Cyberspace Administration of China released draft provisions which specifically prohibited the “fabrication or alteration of followers, views, likes, transactions and other traffic numbers” on live-streaming platforms.

The draft provisions also required such platforms to tighten their management of broadcast operators based on their ratings, clicks, transactions and other metrics, monitor the live streams in real-time and extend the storage time of live stream videos.

Live-streamers in China and their gift-giving fans are also required to register with their real names under new rules unveiled by the National Radio and Television Administration on Monday, which also specified that internet platforms are now responsible for setting a cap on the tips that each user can give.

Authorities are also cracking down on those that provide bot services to generate fake traffic for live streams. In October, a man in eastern China’s Zhejiang province was fined half a million yuan for providing fake live stream views, likes and comments for merchants on Taobao and other e-commerce platforms, Chinese digital newspaper The Paper reported.

To be sure, despite complaints about inflated numbers and greater regulatory scrutiny in recent months, analysts said live-streaming for entertainment and shopping will still continue to grow in the near future.

“The multidirectional interactivity of this format, between streamer and viewer and between viewers themselves, can’t be easily replaced,” Norris said.

The coronavirus pandemic has also increased the relevance of live-streaming, as consumers turned to online platforms to meet their entertainment, shopping and other needs amid lockdowns and social distancing measures.

There were over 10 million e-commerce live-streaming sessions in China attracting more than 50 billion views in just the first half of the year, according to China’s Ministry of Commerce, and such campaigns have been credited with helping China’s retail sector recover as the domestic economy gradually reopens.

Zhang said that despite greater regulatory scrutiny in recent months, he did not expect the pervasiveness of fake live-streaming traffic to change any time soon.

“The demand for traffic will remain, and the cost of fake traffic is being lowered as technology advances,” he said. “This is a problem that not only exists in live-streaming but also in e-commerce, social media, news portals and all kinds of internet services.”

At the same time, Zhang said it was important to acknowledge that despite its problems, the live-streaming industry has also created value. For example, his field research in China’s landlocked areas found that live-streaming has helped farmers sell their farm produce to a much wider range of consumers.

“The contribution of the live-streaming industry has far exceeded the problems it created,” he said.