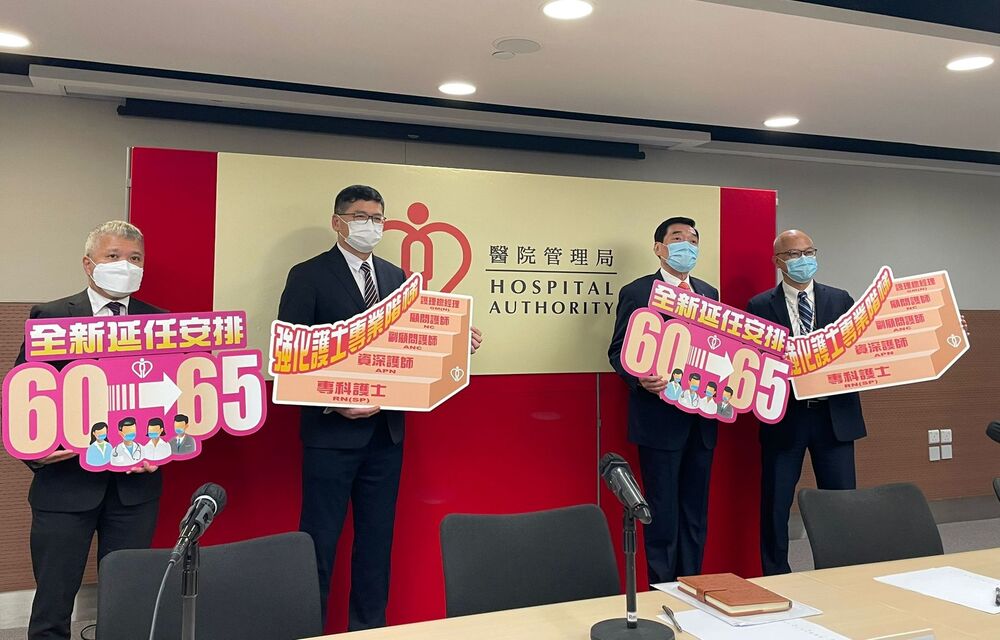 Hospital Authority has extended the retirement age of staffers to up to 65 in order to retain talents, especially of frontline medical staffers.
The authority has implemented two new staff retention policies, including extending the age of retirement from 60 to 65, which will take effect immediately; and creating a new rank of Associate Nurse Consultant to the nursing grade structure.

Frontline clinical staff members will be the main target of the new retention policy, the authority added.

Chairman of the Hospital Authority Henry Fan Hung-ling said there will be an estimated 1,000 doctors, 5,000 nurses and 10,000 supporting staff who will reach the age of 60 in the coming 10 years.

“The new arrangement for extending employment takes a forward-looking approach by engaging and communicating with the retiring staff early at the age of 55 to allow sufficient time for their retirement planning,” Fan said.

“Staff members will be given the flexibility in choosing the time and duration of extending employment up to the age of 65, ” he added.

The authority estimates that around 1,650 retiring clinical professionals will participate in the program in the next five years. Supernumerary posts in promotion ranks will be created if needed, to avoid promotion blockage for serving staff.

Concurrently, the HA has estimated that around 4,000 other support staff members will join the arrangement in the coming five years to fill existing vacancies.

As for the new rank of associate nurse consultant, the Hospital Authority will start recruiting over 140 of them in early 2022.

Qualified nursing staff can apply for the new promotion rank and be promoted progressively along the specialty nursing services pathway to Nurse Consultant or higher positions.

Fan said the turnover rate of nurses is higher than doctors, therefore there is a need to implement retention policies. Commenting on the government’s policy of facilitating foreign doctors to come to Hong Kong, he said “water from afar cannot put out fire.”
Add Comment