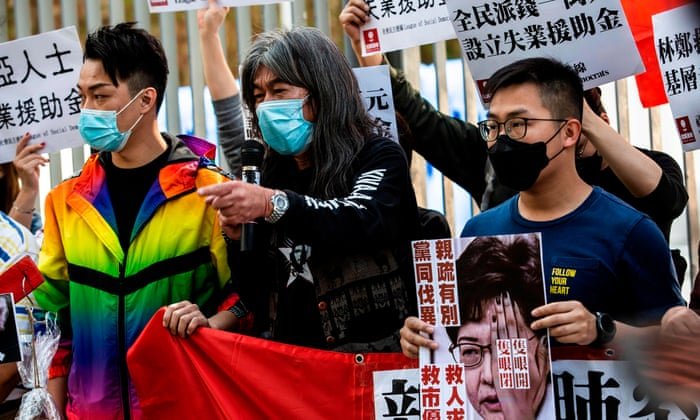 As the revolt dampens and government crackdowns increase, views differ on whether the movement can regain momentum
Amid a global pandemic, Hong Kong’s famously crowded streets are eerily quiet. Most of the city’s 7.5m people have been practising various forms of social distancing for months.

Shops and restaurants are empty, already struggling in a recession after nine months of teetering on the brink of revolution.

It’s a far cry from last year when one in four people took to the streets in protest marches that stretched for kilometres, tightly packed between the towering highrises.

In Hong Kong the coronavirus, which causes the Covid-19 illness, has infected about 130 people.

It’s an extraordinarily low number, given Hong Kong’s proximity to mainland China, where the outbreak started. The city learned hard lessons during the Sars outbreak of 2003, when 299 Hong Kongers died.

After a rocky start, the response to Covid-19 has been comprehensive – schools and public attractions have been closed for months, and there are tight restrictions and laws on incoming travellers. Working from home is common, as is the enthusiasm for wearing masks, avoiding germs, and staying away from public gatherings.

There is tentative talk that containment efforts are working and because of that, there is also speculation over what this means for the protesters who spent months demonstrating against Hong Kong’s authorities.

The protests were sparked by an extradition bill which would have allowed suspected or accused criminals to be sent to mainland China. It went to the heart of Hong Kong concerns about the region’s impending return to Beijing control in 2047, and current intrusions on their freedom and democracy.

The bill was eventually withdrawn but not before the protests escalated and four new demands were made: true universal suffrage for Hong Kongers, an inquiry into police brutality, amnesty for arrested protesters, and a retraction of the government’s classification of protesters as “rioters”.

Only one of the movement’s five demands have been met and members are still subject to waves of crackdowns.

“I think the government is gaining confidence that it is getting better control over the situation and is gradually prodding to see how far it can go with its crackdown,” says Kong Tsung-gan, a writer, educator and activist who participated in the Umbrella movement.

“Question one is when and if people will feel that the coronavirus epidemic is under control. My sense is that the period of panic is over and confidence is growing.”

Andrew Junker, honorary assistant professor with The Chinese University of Hong Kong’s sociology department, says the protests “lost steam”, due to both the virus seizing public attention and the movement reaching something of a peak in November, with the traumatic university sieges and the success of pro-democracy candidates at the local elections.

Even before then, protests had entered a new phase which turned away some of the public, evolving from mass public marches to “warrior style disobedience” – short, sharp, unauthorised protests seeking to provoke police into overreactions which would drive support and media attention to the movement.

A social media administrator of a popular protest-update account tells the Guardian they and friends remained committed to getting back out on the streets.

“To us, of course protecting ourselves from the coronavirus is vital. But when it comes to seeing our home being destroyed by tyranny in every way possible, values we have been upholding are twisted and devastated, the virus seems too minor an issue to hinder us from guarding our home,” she says.

“We will never back off. We are willing to do everything to fight against injustice and expose the truth even if our efforts seemed small and powerless.”

There is widespread acceptance that the fear of infection at mass gatherings has played a part in the diminished numbers.

However it has also driven its own protests.

The already low support and trust in the Hong Kong government and chief executive, Carrie Lam, were compounded by early missteps in responding to the virus.

“The wrong and inefficient allocation of resources [eg masks] and slow border closures incited hatred in our community too,” the administrator says, in reference to protests and strikes over Lam’s reluctance to close borders or place restrictions on travellers from mainland China.

“If the government had closed the border, we could have been able to stop the epidemic spreading in Hong Kong even more effectively.”

Kong says the policing of protests during the outbreak has been “more oppressive than ever”.

Alleged police brutality and mass arrests continue, including three high-profile pro-democracy figures on charges which observers said could apply to almost any protester, as well as hundreds of others at smaller events since.

Last Sunday, police were filmed pepper-spraying journalists and bystanders at a demonstration against the establishment of a Covid-19 clinic in a high-density residential area. Just hours later they were again accused of excessive force in trying to shut down a vigil for a young man who died when he fell from a car park during a protest in November.

On Wednesday the US State Department accused the Hong Kong government of an “apparent unwillingness to criticise the police force” or investigate alleged breaches of civil liberties. Hong Kong dismissed the report as foreign interference.

Albert Ho, a solicitor and high-profile pro-democracy politician in Hong Kong, says it is clear there have been fewer confrontations and clashes since the virus, and authorities appear to be using the quiet time to round up key figures and organisers.

“I think they have come to a stage where they can say they have clamped down on these movements by the youngsters,” he says.

“So they have to do everything to deter the social organisers from continuing to organise marches and demonstrations on a big scale.”

Views differ within the movement on whether another organised, police-approved rally could draw people out in their millions again.

Junker says it looks like the movement is now trying to re-energise, but there’s “a lot of fatalism at this point, saying nothing is working”.

“The government has all the resources and institutional levers to follow up in these retributional ways.”

But it’s hard to predict.

“It’s like a weird kind of effervescent chemistry where [if] the right things converge and boom, you have two million people out on the street.”

Kong says: “One thing is certain – distrust and anger with the government has only grown, and people’s views haven’t changed: we’re sick of an unrepresentative and unresponsive government. We want democracy. How that manifests itself is hard to say.”