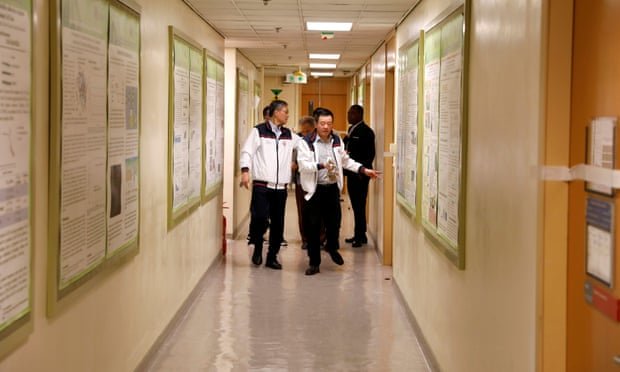 Only one student found during hours-long search of Polytechnic University campus
Staff at Polytechnic University in Hong Kong, the site of a days-long police siege, say they have thoroughly swept the campus and found only one remaining protester, suggesting a bitter standoff between anti-government protesters and police is close to an end.

A team of university staff, counsellors, medics, social workers and security personnel searched the campus for more than six hours and found one female demonstrator lying on a couch who “appeared physically weak and emotionally unstable”, according to a statement from the university.

The university said its team had searched most buildings and car parks and would resume its search on Wednesday in case other protesters were still hiding on campus. Estimates for the number of demonstrators who remain range from less than 10 to a few dozen.

The removal of the last few protesters brings to an end one of the most dramatic confrontations of the last five months of political unrest. According to the government, 1,100 people have left the campus in Kowloon since riot police surrounded it on 17 November after a day of intense clashes between protesters and police.

Over the last week, the number of protesters remaining at the university has dwindled as groups escaped, some abseiling off a bridge and others tunnelling under barriers to nearby roads where volunteer drivers were waiting to drive them to safety. Many others have been caught by police and arrested.

Meanwhile, Chinese authorities and Hong Kong’s leader suggested on Tuesday they had little intention to compromise with the city’s protest movement, despite a landslide victory for pro-democracy campaigners in local elections that served as a proxy referendum on six months of unrest.

The city has enjoyed a few days of relative calm, as protesters held off turning out over the weekend to ensure the election could go ahead without disruption, and then waited to see how officials in China and Hong Kong would respond.

That is unlikely to hold if there is no meaningful response to the vote. Pro-democracy candidates won nearly 90% of seats in district councils across the city, with 3 million people – 70% of registered voters – casting a ballot.

Beijing appears to be scrambling to respond to the unprecedented democratic rebuke to the Communist party. Officials have not directly addressed the outcome, instead repeating standard lines that Hong Kong is part of China.

However, late on Monday, an editorial from the state news agency Xinhua tried to delegitimise the huge democratic mandate Hong Kong had given the protesters by blaming “rioters” supported by “external forces” for affecting the outcome of the election.

Hong Kong’s chief executive, Carrie Lam, who had for months claimed the support of a “silent majority” for her hardline stance on the protests, has accepted that the vote was a sweeping condemnation of her administration.

In her first press conference since the vote ended, she said normally sleepy district council elections had had a rare “political dimension” this year.

“We were aware of the large number of voters coming out to cast their vote … to express a view on many issues in society, including, I would readily accept, that, deficiencies in governance, including unhappiness with the time taken to deal with the current unstable environment and of course to end violence,” she said.

However, she did not address the “five demands” the protest movement has been making for months, including greater democracy and an independent inquiry into police violence during protests in which two people have died and hundreds left injured.

Instead she repeaed vague promises of social consultations, which protesters have previously rejected, and returned to her September decision to drop the extradition bill that originally sparked protests, even though even at the time that was rejected as “too little, too late”.

Lam also reiterated the pro-Beijing campaign line – clearly rejected at the polls – that Hong Kong residents’ main desire was an end to the violence.

“Hong Kong people have realised very clearly that Hong Kong can no longer tolerate this chaotic situation. Everybody wants to go back to their normal life,” she said. “As I have said repeatedly, resorting to violence will not give us that way forward. So please help us to maintain that relative calm and peace that we have seen in the last week or so and provide a good basis for Hong Kong to move forward.”

Chinese authorities are so concerned by the city’s spiralling unrest that the president, Xi Jinping, is getting daily written briefings on the situation, Reuters has reported.

The government mouthpiece People’s Daily also claimed that the election – which proceeded almost without incident on voting day – was skewed by violence. “Social unrest, which has lasted for months, has seriously disrupted the electoral process,” it said.

China Central Television’s (CCTV) anchorwoman Liu Xin wrote in a commentary on the state broadcaster’s website that the election had not been a fair game, and that pro-establishment candidates and their supporters had faced widespread harassment and intimidation.

China has set up a crisis command centre in a villa just across the border with the mainland, and is considering replacing its official liaison for Hong Kong, the report said. The operation run out of “Bauhinia villa” bypasses the formal structures for managing ties between the semi-autonomous city and Beijing.

China has also summoned the US ambassador to protest against the Hong Kong Human Rights and Democracy Act just passed by the US Congress, accusing Washington of meddling in China’s domestic affairs.

China’s vice-foreign minister, Zheng Zeguang, told the ambassador that passing the bill amounted to encouraging violence, and the US should “correct its errors and stop meddling in Hong Kong affairs and interfering in China’s internal matters”.

Donald Trump is expected to sign the bill into law, even though he has in the past expressed ambivalent views about the Hong Kong protests, and is in the middle of difficult trade negotiations with Beijing.
#Donald Trump
Add Comment