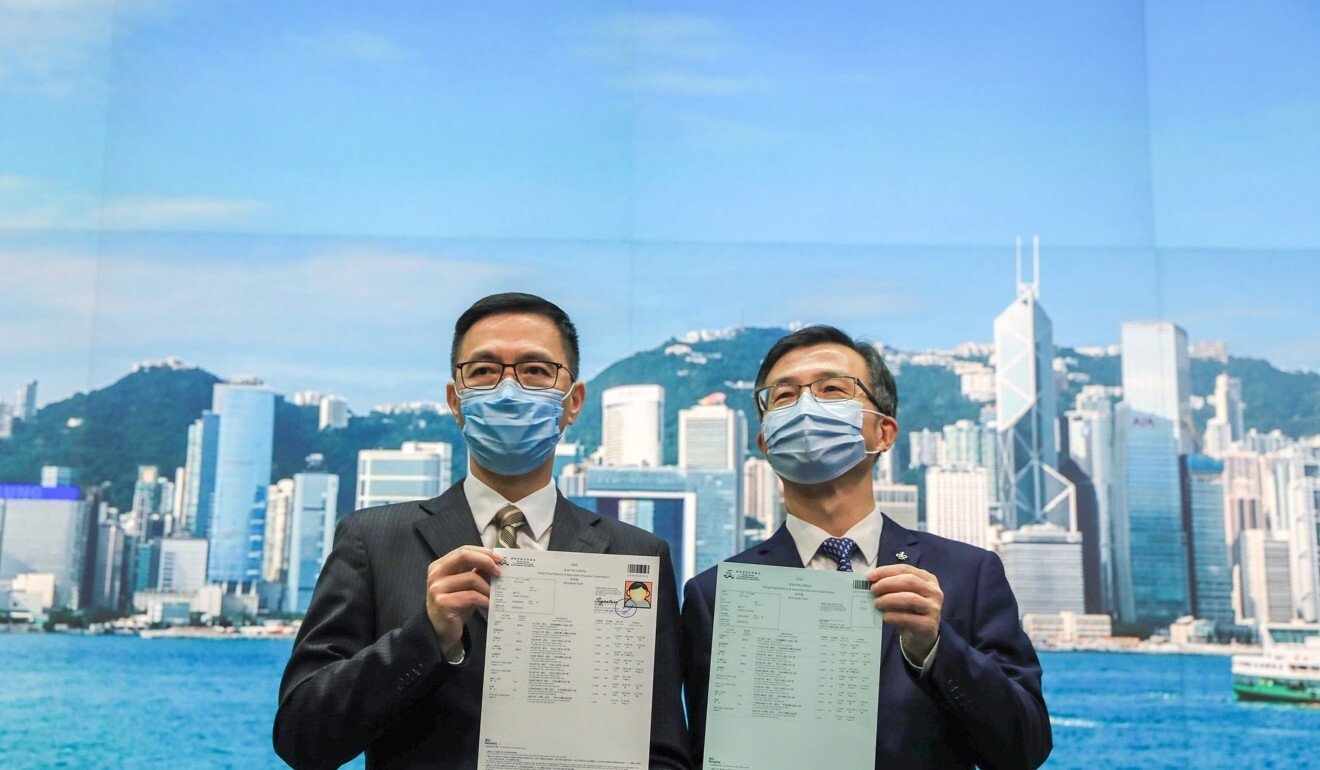 More than 52,000 candidates scheduled to take tests, already postponed from March 27. Officials have outlined social-distancing measures for inside exam halls
Hong Kong’s university entrance exams will go ahead from next Friday despite the ongoing coronavirus pandemic, the education minister has announced, while adding that it is too early to decide when classes should resume.

Secretary for Education Kevin Yeung Yun-hung on Wednesday also outlined details of contingency plans for the Diploma of Secondary Education (DSE) exams, including postponing them until June or even cancellation if the pandemic worsened, confirming an earlier Post report.

Kindergartens, primary and secondary schools have been closed since early February until further notice, but Yeung said it was too early to decide when the city’s 900,000 students could head back despite not ruling out the possibility of classes resuming before the summer break began in July.

The city on Wednesday recorded a single-digit growth of confirmed infections for the fourth day in a row, bringing the total to 1,016 cases.

The DSE exams, which more than 52,000 candidates were scheduled to take this year, had already been postponed from March 27 because of the health crisis.

“After reviewing the latest situation and seeking advice from the Centre for Health Protection, the Education Bureau and Hong Kong Examinations and Assessment Authority have decided the DSE written exams should begin as planned from April 24,” Yeung said, adding that the results would be released on July 22.

Still, Yeung said there were three backup plans in case the local Covid-19 situation worsened; namely postponing the start of the exams to May 22, or if necessary, to June 11. If that happened, universities could face having to postpone the admissions process and push back the start of the next academic year to October.

The last resort would be to cancel the exams. Students would then be assessed on their previous internal test results, as well as making reference to the public exam performances of past cohorts at each school. Some 6,700 private candidates, however, would not be able to receive any grades.

Yeung did not outline the specific conditions under which the backup plans would be used, saying only that further decisions would be made if necessary after reviewing the overall pandemic situation.

He also urged bosses to allow employees flexible working hours on the dates the DSE exams took place so students could travel to test venues more smoothly before 8am.

Stepped-up infection control measures already announced for the 350 exam centres located at secondary schools include requiring all candidates and invigilators to wear masks, spacing out all tables by about 1.8 metres, and asking any candidate with a fever – a body temperature of more than 38 degrees Celsius – to leave the venue.

“An exam is a form of static, low-risk activity,” Yeung added. “If everyone follows the rules and minimises social contact inside and outside exam venues, the exams should be able to go ahead safely.”

Unlike overseas examinations such as the International Baccalaureate, which was cancelled globally last month, the DSE relies heavily on final exam results, with only a small proportion of school-based assessments.

Hong Kong Examinations and Assessment Authority secretary general So Kwok-sang said exams would only be cancelled “if there was no choice left” as it would be hard to accurately assess a candidate’s performance without them.

So added if a candidate or any of the 21,000 invigilators became infected with Covid-19 during the exams, it was unlikely others at the exam centres would be categorised as close contacts because of the many infection control measures.

He said health officials would arrange for close contacts to be tested and quarantined while other contacts would be required to undergo medical surveillance. The exam venue involved would also be required to be thoroughly disinfected.

Hong Kong Association of the Heads of Secondary Schools chairman Teddy Tang Chun-keung said most of the exam centres were ready to host the exams and believed education officials would make candidates’ safety a priority.

“Students’ health and safety is the No 1 concern. [The Education Bureau] would not risk students’ lives if there was a sudden change to the Covid-19 situation,” he said.

At the exam centre at SKH Tang Shiu Kin Secondary School in Wan Chai, preparations have already been carried out. The number of candidates who can be accommodated in the school hall has been cut from about 200 to 130, while four classrooms will also be used.

Principal Tai Tak-ching advised students to sleep earlier and be mentally and physically prepared while studying for the exams.
Form Six student Thomas Lo, who studies at a Sham Shui Po school, believed Yeung’s announcement had given candidates a clearer target to prepare for the exams. But he urged the Education Bureau to outline the conditions under which backup plans would be adopted.
Add Comment