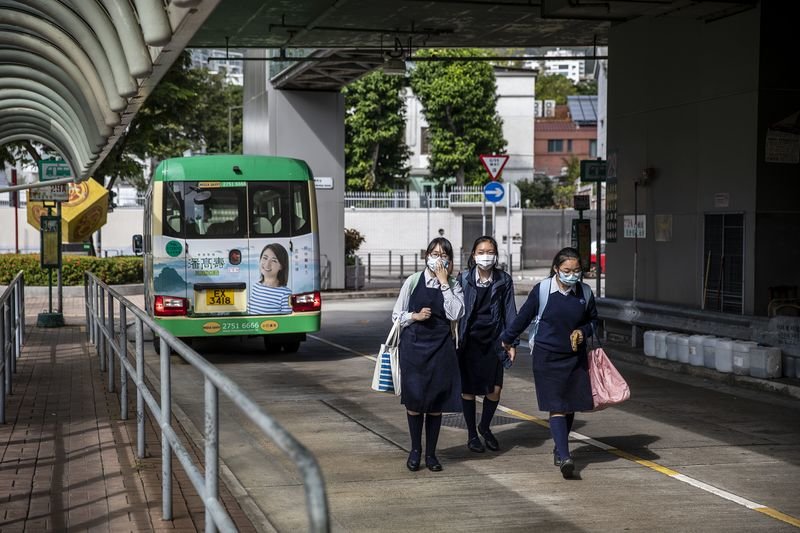 More than a million students in Hong Kong are back at home for the third time this year as the Asian financial center fights a new wave of infection, even as governments around the world prioritize keeping kids in schools.

The city’s decision to stop in-person instruction again despite a growing body of research that it’s safe to keep kids in classrooms has been a controversial one. No virus clusters in Hong Kong have been linked to schools, and there’s mounting concern that closures will extract a major social and mental toll on children, especially those from disadvantaged backgrounds.

Some parents are upset that social venues like gyms and beauty parlors are allowed to stay open and are frustrated that the drastic move has been taken again though Hong Kong’s outbreak is relatively small.

In the Asia-Pacific region, only places with serious coronavirus spread such as Malaysia, Indonesia and Philippines have kept students away from schools. These places are reporting as many as 5,000 cases a day, compared to Hong Kong’s 115 on Nov. 29, the day school closures were ordered.

“The evidence from around the world is that schools are not a location where Covid-19 outbreaks occur that commonly,” said Ben Cowling, head of the epidemiology division at the University of Hong Kong. “School closures don’t have a substantial effect on Covid-19 transmission.”

The decision to shutter schools was among a suite of measures Hong Kong rolled out to contain its latest wave, which included a ban on public gatherings of more than two people. The city’s response overall has been criticized for being erratic and unscientific, compared to the alert systems in places like Singapore, South Korea and New Zealand.

The government says that in a densely populated city where many live in close quarters and are already fatigued by months of restrictions, shuttering schools is a relatively straightforward lever to pull in place of full lockdowns.

“If we’re just talking about figures and numbers, closing the schools is an easy way out,” said Lam Ching-choi, a medical doctor and government adviser who was present at the weekend meeting where the latest round of coronavirus responses were decided. He admitted that it was a “very tough” decision.

That’s not enough for exhausted parents, some of whom have had their kids trapped in tiny apartments for much of this year. The school closures could also contribute to an economic backslide as the city again goes into virus-fighting mode, which threatens to erode what had been tentative signs of recovery in the third quarter.

“On the immediate impact, parents need to cope with many issues which will lower their productivity,” said Alicia Garcia Herrero, chief Asia Pacific economist with Natixis SA. “Secondly, we are hurting Hong Kong’s future human capital as there is enough evidence that online learning cannot fully substitute for in-class learning.”

More than 160 countries have closed schools at certain points during the pandemic, affecting nearly 1.5 billion students, according to Unesco. The organization warned of higher dropout rates, malnutrition, social isolation and increased exposure to violence and exploitation as a result.

Some countries are turning to a variety of methods to ensure that children are able to go to school while keeping the spread of the virus contained. Places like South Korea reduce class sizes when infections go up, while France kept schools open through its second national lockdown.

There’s also a growing body of research that children, younger ones in particular, are less likely to catch the virus in the first place. Cowling co-authored a paper published in Eurosurveillance, a medical journal for epidemiology and infectious diseases, in which he studied 20 cases of children aged 5 to 17 who tested positive in Hong Kong in July. They had gone to school when they were likely contagious, yet there were no other reported infections connected to these cases.

Calling the medical research so far “inconclusive,” Ip Kin-yuen, vice-president of the Hong Kong Professional Teachers’ Union, said educators are concerned about transmission between students and teachers. His teachers’ union is one of two in the city that called on the government to stop in-person teaching in light of the recent case spike.

The government says it had no choice but to close classrooms after hundreds of schools saw recent outbreaks of upper respiratory illnesses with similar symptoms to Covid-19 last month. It was also troubled by mobility data showing the city’s public transport network -- used by students and adult workers alike -- was almost at pre-pandemic levels, said Lam, the government adviser.

The concurrent outbreak of upper respiratory illness among younger kids meant that the city’s contact-tracing ability could have been stretched to breaking point if schools were not closed, said Gabriel Leung, chair of public health medicine at HKU and one of four experts advising the government on Covid-19.

Angry parents, however, feel that children are getting short shrift.

A letter sent last week to the government signed by parents representing about 300 families in Hong Kong decried the lack of scientific data to support the decision.

“Our point is that the government seems to prioritize pretty much everything else first over schools,” said Jen Yuan, a mother of two who helped draft the letter. “They close schools first because it’s easy, and there’s no economic impact.” She said the government did not respond to the letter.

Alex Cook, an associate professor and vice dean of research at the National University of Singapore’s Saw Swee Hock School of Public Health, cautioned that the pandemic has “taken up a much greater fraction” of kids’ lives than older people.

“For generational equity, we should aim to keep life as normal as possible for children within the boundaries of avoiding excessive spread,” he said.