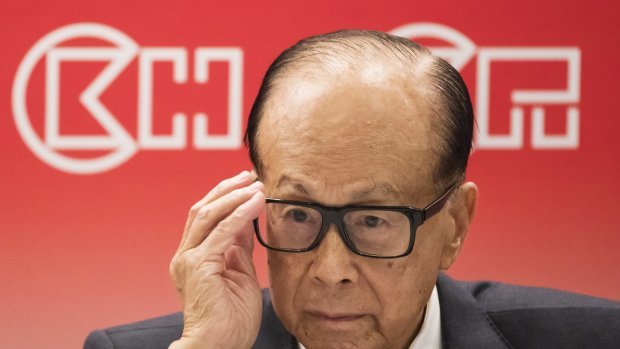 Li Ka-shing is selling two properties in Beijing and Shanghai worth $10 billion in the latest sign he is pulling out of mainland China, where his ties to power appear to have weakened under President Xi Jinping's rule.
Hong Kong tycoon Li Ka-shing plans to dispose of two properties in Beijing and Shanghai worth of 50 billion yuan ($10 billion), a sign the billionaire is further pulling out of the Chinese mainland.

Mainland property giant Sunac China Holdings Ltd is interested in taking over the project, a person close to the deal said.

CK bought the land nearly 20 years ago, paying 700 million yuan for the 27-hectare area, and phase one of Yicui Garden was completed and sold in 2013.

As phase two was not started for years, the Ministry of Land and Resources listed it as idle land in 2010.

Phase two of Yicui Garden is under construction, including high-rise condominiums and townhouses. Some of the buildings are close to completion.

The project has applied for pre-sale approval, which is expected by the end of this year, according to a project staffer.

Mr Li is known for close relations with Beijing, but his ties to mainland power appear to have weakened since President Xi Jinping took office in 2013.

After its most recent disposal of a $US1.02 billion ($1.37 billion) project in Chengdu in July, CK Asset said it still had more than 50 real estate projects in more than 20 mainland cities.

CK bought the 117 hectares of land in Shanghai in 2006 together with Zhejiang-based developer Herun Group Co Ltd. CK holds a 60 per cent stake in the project and Herun holds 40 per cent.

In January, CK said it was exploring acquiring the 40 per cent stake from Herun.

Chinese regulators are mulling a new round of credit tightening targeting big property developers, which will limit the number of buyers willing to acquire the assets, a person close to the matter said.

Regulators are due to test a new financing directive on 12 top real estate companies that will limit their ability to take on more borrowing, according to sources who took part in a meeting on August 20 in Beijing involving the People’s Bank of China, the Ministry of Housing and Urban-Rural Development, property enterprises and other government bodies.

At the meeting, the regulators conveyed a “three red lines” policy that sets limits on bank borrowings by developers: a liability-to-asset ratio (excluding pre-sales) of no more than 70 per cent; a net debt-to-equity ratio of less than 100 per cent; and cash holdings at least equal to short-term debt.

Data compiled by Caixin show that Evergrande, Sunac, Greenland, and Zhong Liang have already crossed all three red lines and would be subject to the bank borrowing limits.

Sources at Sunac China said it was unaware whether the company was planning a large asset purchase.
Add Comment