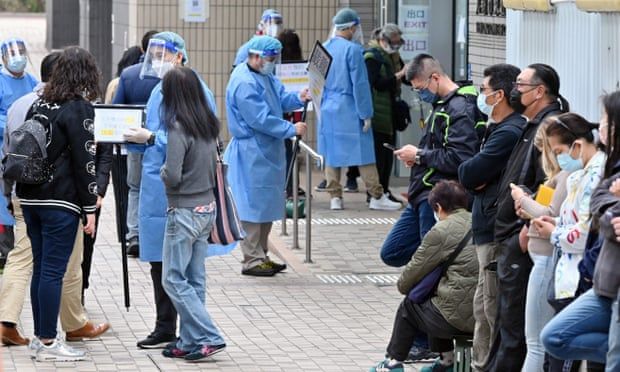 Hong Kong has turned newly built public housing and 10,000 hotel rooms into quarantine accommodation as authorities strive to control an Omicron outbreak that has overwhelmed the city.

Recent days have seen record daily highs of more than 2,000 cases, but experts have warned the outbreak could reach about 30,000 a day. Already hospitals, testing facilities, and isolation centres have been swamped, with local media publishing photos of spillover tents set up in hospital carparks.

Thousands of people infected with Covid-19 are on a waiting list for isolation rooms, with another 5,400 preliminary positive cases reported on Tuesday morning.

The move to repurpose social housing in Fanling and Kwai Chung will accommodate more than 3,000 people, chief executive Carrie Lam said. It mirrors a decision in February 2020 to convert a newly built block in Sha Tin, reversing a pledge not to repurpose the sought-after public housing and sparking small protests.

The hotel rooms were not yet identified, and Lam warned she had emergency legal powers to compel hotels if not enough were cooperating.

Lam also said there were “no plans whatsoever” for any widespread city lockdowns, instead continuing with district-level and estate-specific localised lockdowns.

Although the city’s fifth wave of infection had “outgrown our capacity”, Lam said the government remained committed to fully containing the outbreak, in contrast to many other countries which have since abandoned “zero Covid” strategies after being hit by the highly transmissible Omicron variant.

“It is not an option to surrender to the virus,” Lam said.

Last week the government ended its policy of sending all diagnosed cases to hospital for isolation, opening rooms at Penny’s Bay quarantine facility for mild or asymptomatic people to recover.

To address a backlog of PCR tests created by mandatory testing orders which sent hundreds of thousands of residents to hours-long queues, Lam also announced authorities would start handing out 100m rapid testing kits on Tuesday, beginning with staff at aged care homes.

The government has established taskforces to work with their mainland counterparts after China’s central government offered the city help with its outbreak. The new taskforces will focus on epidemiology, boosting testing capacity, ensuring medical and food supplies, and building isolation and treatment facilities.

Hong Kong has produced one of the world’s most effective responses during the pandemic, but has been criticised over both its inconsistency and harshness, and even sparked a rare protest on Tuesday. The city is once again under tough social restrictions not seen since mid 2020, with near-daily additions or alterations.

Vaccination rates remain comparatively low, especially among the elderly demographics. About 55% of people aged 70-79 have received two doses, and for those 80 and older the figure is just 22.6%. . Less than 15% of the adult population has received a booster short.