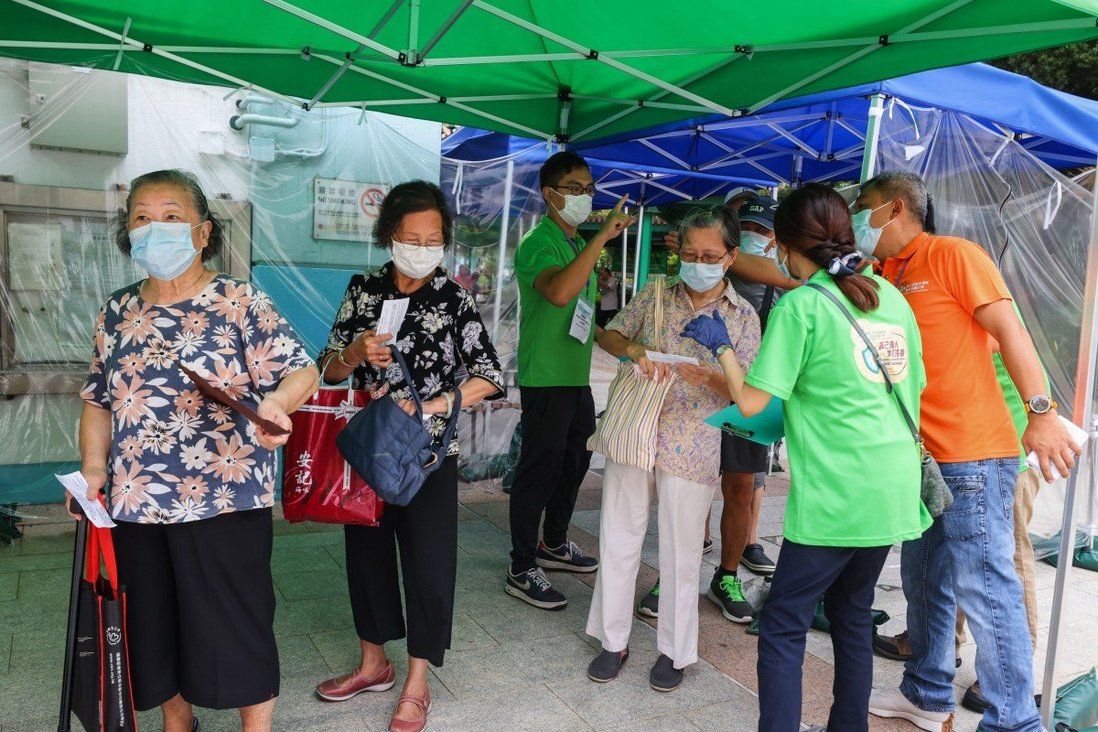 Patrick Nip, who is in charge of Hong Kong’s inoculation drive, says the daily vaccine uptake has fallen to 12,000 and a more proactive approach is needed.

Health authorities are targeting Hong Kong’s vaccine-hesitant elderly by launching a one-stop consultation and inoculation service among other new strategies, with officials promising to “go deep into the community” in a bid to reach herd immunity against Covid-19 this month.

Civil service chief Patrick Nip Tak-kuen, who is in charge of Hong Kong’s inoculation drive, said the daily vaccine uptake had fallen to 12,000 and a more proactive approach was needed.

He warned the city would fall short of its target of having 70 per cent – the threshold for achieving herd immunity – of its population immunised with a first jab, unless more than 20,000 people received their first dose each day for the next three weeks.

“The inoculation drive has hit a bottleneck. To get more people vaccinated, we have to adopt a more proactive, more agile, and more convenient approach,” Nip told a press conference.

“The 70 per cent vaccination rate is our target, but it’s not the final one … after that we need to have everyone suitable for vaccination getting the jab. We hope that by the end of the year, most of the eligible population will get vaccinated.”

As of Thursday, 4.3 million people had received their first Covid-19 jab, accounting for 63.8 per cent of the eligible population. But uptake has mainly been concentrated on those aged between 20 and 59, with more than 70 per cent vaccinated. That number drops for people aged 60 to 69, with only 56 per cent having had their first jab, and falls even further for those in their seventies and eighties, at 37 and 12 per cent respectively.

The government places great importance on a high inoculation rate not only because vaccines help build an “immunity barrier” against an ever-evolving virus producing more infectious variants, but also because officials have said it could open the door to quarantine-free access to mainland China.

However, a Guangdong province government source on Wednesday told the Post that even with high vaccination figures locally a deal on reopening the border was realistically more likely to be reached next March or April.

Nip did not give any guarantees on the border reopening, but he said officials would go deep into the community to reach hesitant groups.

Headlining the new strategy would be a one-stop service combining health talks, consultation and on-site vaccination in all 18 districts across the city.

“I think it’s important that we ease the concerns of the elderly. I don’t think the elderly are opposed to vaccination,” he said. “Many of them actually want to get vaccinated but they have some concerns … What they need is a clear explanation from the doctors, consultation and assurance from doctors and nurses, so that’s what we would focus on.”

All 18 district officers in the Home Affairs Department would join forces with local leaders to mobilise neighbourhoods to get vaccinated, Nip said.

Outreach services would also continue to administer jabs at convenient spots in shopping centres and public estates without bookings and hold more health talks for family members of care home residents to further ease their fears about having elderly relatives inoculated.

Nip also reiterated an earlier pledge to extend vaccination without bookings to five key groups – health and care home employees, schoolteachers, bus drivers, and restaurant and construction workers, adding it could further be expanded to cover other sectors later.

Asked if the government would consider providing pre-vaccination check-ups, Nip said: “We do not think the elderly require a proper or elaborate health check-up before vaccination. Actually, the evidence shows that most of the elderly are suitable for vaccination, even if they have chronic illness. If [their] chronic disease is stable, then it’s okay.”

Health minister Sophia Chan Siu-chee said based on analysis of imported cases, the infection risk of unvaccinated people was three times higher than for the inoculated.

“We will mobilise the Housing Authority, Housing Society and district-based health centres to promote the inoculation drive,” she added.

Citing data from a study published in June by the agency Public Health England, Chan said Covid-19 vaccines manufactured by Pfizer BioNTech and AstraZeneca offered more than 90 per cent protection against hospitalisation from the Delta variant.

She added that in Hong Kong, none of the 115 people infected after vaccination were in a serious condition.

But in a sign that enthusiasm for jabs was waning, Nip revealed that five community vaccination centres, including a popular one run by the Hong Kong Sanatorium & Hospital, would close by the end of next month, while the remaining 21 would remain in operation until year-end.

However, from November, those 21 would only operate six days a week with shortened opening hours. They were expected to administer first doses in October and November, and finish giving second shots in December. 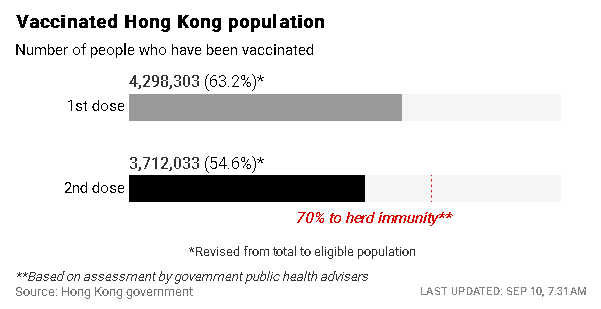 Health officials on Thursday confirmed two new Covid-19 cases, involving arrivals from the Philippines and South Korea, pushing the city’s total infection count to 12,133, with 212 related deaths. Both patients had been fully vaccinated and were asymptomatic.

Respiratory medicine expert Dr Leung Chi-chiu urged the government to focus efforts on the elderly, and those with chronic diseases, so the city could hit its overall target of 70 per cent.

“Even if there are more policies to push those [aged 20 to 60] to get jabbed, that would not be very effective … as these groups already have a high vaccination rate,” Leung told a radio show.

“Aside from exceptional cases, such as those suffering from acute illnesses or worsening diseases, all elderly and people with chronic diseases should get jabbed.”

While the city is set to phase out using deep-throat saliva samples as a recognised method for compulsory testing, Leung said if that meant workers at high-risk places such as the airport and designated quarantine hotels needed to head to community testing centres regularly, it could potentially increase the risks of local transmission.

He said the government should consider helping such staff members to get tested at work.

Elderly Services Association of Hong Kong chairman Kenneth Chan Chi-yuk said he believed the government was trying a combination of methods to boost vaccination. “They are doing all they can, but there’s no silver bullet,” he said.

Chan suggested health department officials even go so far as to call relatives of care home residents one by one, to explain why the vaccine would bring more benefits than harm to their loved ones.