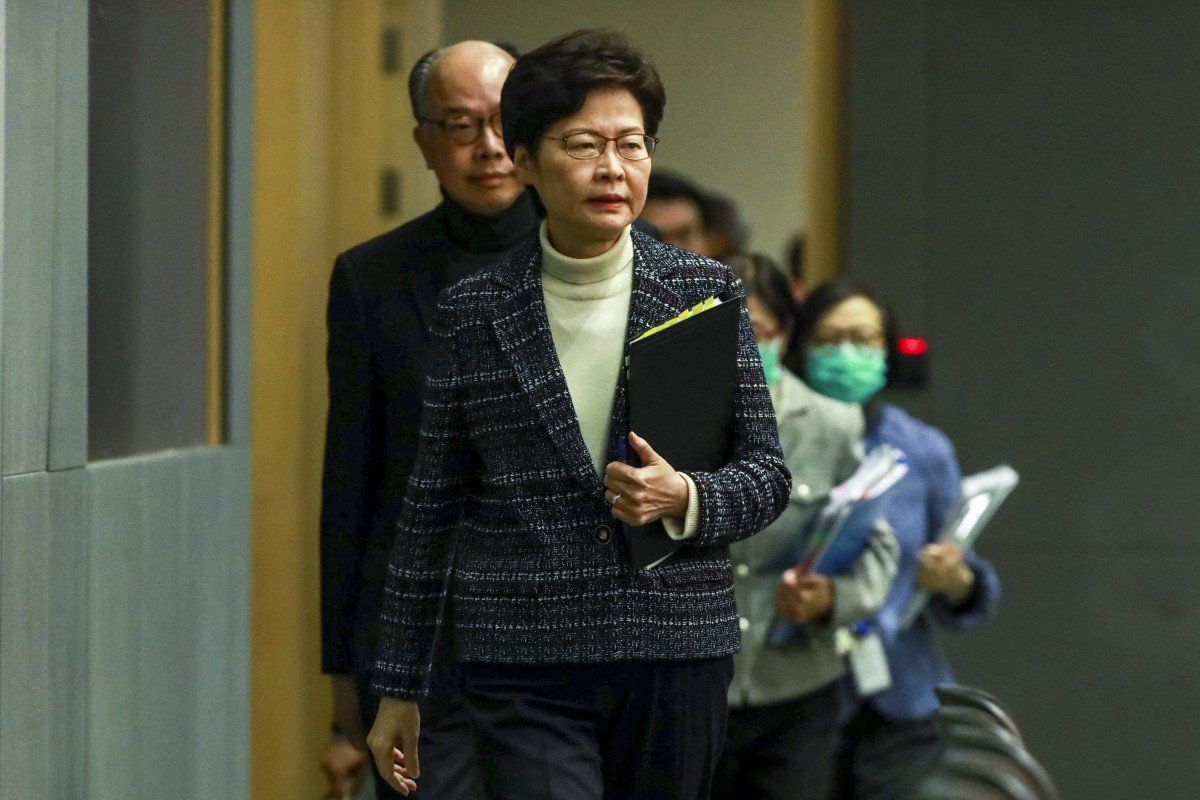 Coronavirus: Hong Kong to require all travellers entering from mainland China to go into quarantine for 14 days as city’s leader invokes special powers

Measure will take effect on Saturday to enable residents affected to make adjustments to their plans. Lam also apologises for remark demanding that government officials only wear masks under strict circumstances in a bid to conserve supplies

All travellers from mainland China entering Hong Kong, including local residents, would be required to go into quarantine for 14 days, the city’s leader said on Wednesday, as she also disclosed the government was setting aside a HK$10 billion fund to tackle the deadly coronavirus outbreak.

Confirming an earlier report by the Post, Carrie Lam Cheng Yuet-ngor said the quarantine measures would be done through invoking the chief executive’s special powers under the Prevention and Control of Disease Ordinance.

The measure would take effect on Saturday to enable residents affected to make adjustments to their plans, she added. But Lam did not make it immediately clear how the quarantine would be enforced, including where the travellers would stay.

Lam also apologised for her remarks the previous day when she sparked controversy by demanding that government officials only wear masks under strict circumstances in a bid to conserve supplies. She clarified that when she said she would discourage them from wearing masks if they were not sick, she was only talking about principal officials.

Hong Kong recorded its first death related to the coronavirus on Tuesday.

On the outbreak, Lam said by midnight, there were 24,324 coronavirus cases in mainland China, while in Hong Kong, the situation has worsened. On Tuesday and Wednesday, there had been six new cases, increasing the total to 21. The three confirmed cases on Tuesday had no travel history.

“The situation has entered another critical stage. After consulting medical experts, I am announcing the further reduction of cross-border traffic.”

She said the HK$10 billion (US$1.28 billion) fund would be set up to help the city fight the outbreak.

“We must unite and set aside our differences, so that we can win this war against the disease,” Lam said.

She also said it was likely the government would have to extend civil servants’ work from home arrangements, confirming another Post report. “There is a high chance. We will announce it as soon as possible,” she said.

Lam was asked if it was too late to announce mandatory quarantine, and if she should take responsibility over the emergence of local transmission cases.

“Our strategy was adopted according to medical experts’ advice,” she said.

While admitting she was worried about the spread of the coronavirus locally, Lam added that the city should remain confident, as it had a robust health system and adequate resources, while people had also faced outbreaks of other viruses.

With a strike by public hospital workers, who are calling for a complete border shutdown, entering its third day, Lam was asked why she had refused to meet medical professionals.

“When a union in the Hospital Authority launched a strike, the best officials to meet them are those in charge of human resources management in the authority,” she said. “But we know their demands, and we have worked to address their demands.”

She also explained that some officials at the press conference were wearing masks either because they were unwell, or had worked in an environment where they were necessary.

“This is a new virus … Our measures have been adjusted as more information emerged, and the World Health Organisation has said that it was not unusual for local transmission cases to emerge in some places,” Chan said.

Pressed at least twice by reporters, both Lam and Secretary for Food and Health Sophia Chan Siu-chee said details of the enforcement would be announced later. Relevant subsidiary legislation would be drafted in the coming days, Chan said.

Asked how the authorities would put non-locals under mandatory quarantine for two weeks, Chan only replied that the majority of people who crossed the border were residents.

Lam said she could not estimate how many people would be quarantined.

“But I can say that this measure is very strict. After we implemented earlier measures, the number of incoming travellers decreased from 170,991 on January 29 to 28,675 on February 4, this number will certainly fall further after this latest measure,” she said.

Earlier on Wednesday, World Dream, a cruise ship on which three mainland Chinese travellers diagnosed with the coronavirus had previously sailed, was forced to return to Kai Tak, with dozens of crew members saying they felt unwell.

Dr Leung Yiu-hong, chief port health officer of the Department of Health, said about 30 crew members declared they had symptoms, including three who said they had fever. The three were being sent to two public hospitals for isolation and tests.
The other crew members’ symptoms included coughing and sore throat. Samples have been collected to check whether they could be infected with the coronavirus.

Leung added that 206 people had left the ship after an earlier voyage, and the cruise company had been helping to track them down.

On Monday, Lam buckled under intense public and political pressure to announce a further closure of the city’s borders with the mainland to keep out the coronavirus that originated in Wuhan, but still stopping short of the total shutdown demanded by public hospital workers who vowed to escalate the strike they began that day.

She said all border crossings would be closed from midnight Monday, except for the Shenzhen Bay joint checkpoint, Hong Kong-Zhuhai-Macau Bridge and international airport, while Kai Tak Cruise Terminal would also remain open.

Passenger traffic at the checkpoints fell 44 per cent, from 217,085 on Monday to 121,828 the following day. Among them, 73 per cent were Hong Kong residents, 17 per cent mainland visitors and the remaining 10 per cent overseas travellers.

More than 40,000 travelled across the Shenzhen Bay crossing, compared to only 19,000 on Monday.

The latest measure comes on top of a new move by the government to also extend work-from-home arrangements for staff by at least another week. Civil servants will stay at home until February 16 at the earliest.

Most of the government’s 176,000 employees were originally advised to keep away from the office between January 29 and February 2, but the government has since pushed that back to February 9.

Revealing a further extension, a person familiar with the government’s position said: “Civil servants will be asked to work from home for another week or for a slightly longer period amid safety concerns around the coronavirus.”

Similar advice is likely to be adopted in the private sector, where many workers have already been told to stay at home.

The government was also considering extending the temporary closure of schools beyond March 2. But that was unlikely to be announced on Wednesday afternoon after a government insider said a decision would be made nearer the time.

On Tuesday and Wednesday, there had been six new cases in Hong Kong, increasing the total to 21.

A 39-year-old man from Hung Hom became the first patient diagnosed with the coronavirus to die in Hong Kong. On Wednesday morning, the number of confirmed cases on the mainland rose by 3,887 – a record daily high – to 24,324, most which were in Hubei, the epicentre of the outbreak.

Nearly 500 have been killed across the world.