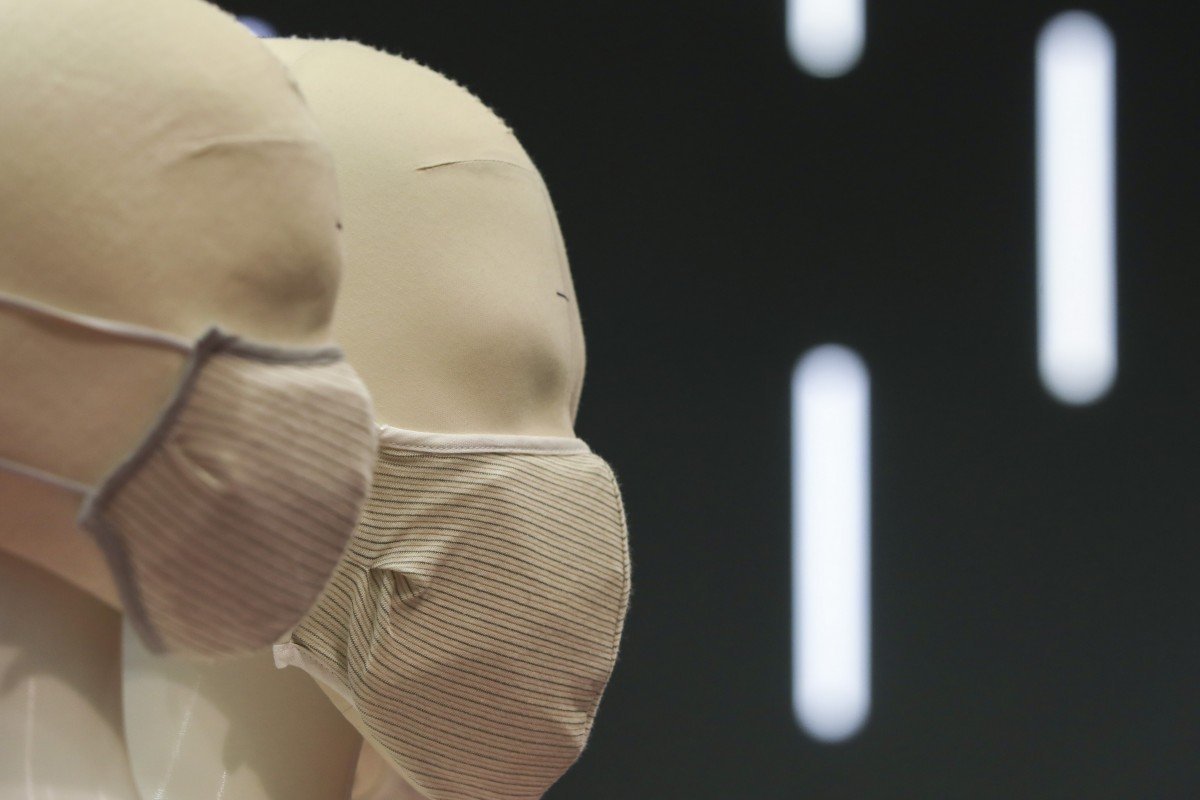 Scheme embroiled in controversy after the government refused to tender the contract and links later revealed between developer and manufacturers. Hongkong Post will deliver the masks to 2.78 million locals who have already signed up to the programme

Free reusable masks will be sent out to Hongkongers starting on Monday under a scheme that has proven a public relations headache for the government.

Under the plan, every resident is eligible to receive the masks which can be used up to 60 times. But the roll-out has been anything but smooth for the administration, after links were revealed between the mask designer, a government-funded non-governmental organisation, and some of the manufacturers.

The giveaway comes as Hong Kong recorded three new coronavirus cases on Sunday – two travellers returning from Pakistan and one from Britain – taking the tally to 1,047, with four related deaths. The last case of local transmission was three weeks ago, and although some social-distancing rules have been eased recently, health authorities stress the city cannot let its guard down.

About 2.78 million residents have already signed up to the scheme, at qmask.gov.hk, and the government will start sending out SMS texts on Sunday to alert recipients that Hongkong Post will begin making deliveries the next day. If no one is home, a collection notification card will be issued and from the second working day people can take the notice and their ID to the designated post office to collect the masks. The sign-up period for the scheme runs until June 6, although people can still take part after that by visiting a post office.

Hongkong Post said it would only notify applicants using SMS and the messages would not ask for any personal information. Each household will also receive a pack of 10 disposable masks in the weeks to come.

The reusable ones incorporate copper, which has antimicrobial properties, and adopt the chemical symbol of the metal in the name, CuMask+. They were designed by the Hong Kong Research Institute of Textiles and Apparel and cost about HK$40 (US$5) each.

In seeking manufacturers, the government decided against launching a public tender and initially refused to name the companies it chose. But officials eventually relented to mounting public pressure, and identified the producers, some of which had ties to the institute.

A company supplying raw materials, Esquel Group, confirmed its vice-chairwoman Teresa Yang was chairwoman of the NGO. Yang made a declaration to its board about Esquel’s involvement in February, and neither the company nor the chairwoman was involved in the “discussion process of the development, materials supply and production” of reusable masks, the company said in a statement on Saturday night.

Explaining its decision, the company said that during the procurement process, the institute contacted the sales department and “expressed extreme difficulty in securing raw materials”.

The company that was awarded the contract to manufacture the masks, Crystal International Group, confirmed its executive director Wong Chi-fai was a director of the institute, and he disclosed his interest to the NGO in February, according to the company. Crystal International rescheduled its existing orders and reserved considerable resources to make the reusable masks at its Vietnam facilities, it said.

The head of a company responsible for sterilising the masks said the controversy surrounding the scheme was not surprising. “Everything has two sides,” said Ronna Chao Wei-ting, the chairwoman of Novetex. Her factory had set aside existing orders to handle the government’s masks and the company would not make a profit off them.

While every Hongkonger is eligible for the masks, the required cleaning might pose a challenge to elderly people suffering chronic illnesses. The Hong Kong Public Doctors Association, with 6,000 members, asked operators of care homes to avoid having their residents use them. Nor should patients or visitors use them when in hospitals or at outpatient clinics.

The association said it had asked the Hospital Authority whether it would require patients or visitors to wear surgical masks instead and if they would be provided.

The association also wrote to the Social Welfare Department asking whether it had provided guidance to residential care home operators on the proper use of the protective item.

As the administration tries to get past the public relations difficulties, the Food and Environmental Hygiene Department has run into its own problems over face protection available for street cleaners.

A labour union said some government-employed cleaners complained their supervisors would not allow them to accept free masks from any group because doing so could flout the anti-corruption law.

“It’s outrageous,” said Li Mei-siu, vice-chairwoman of the department’s Staff Rights Union. “Why does the … department think there is a transfer of benefits when Hongkongers like me want to show some appreciation to the street cleaners?”

Li called the department’s welfare division and was told the free masks could be considered a transfer of interests. “It’s disrespectful to the cleaners who need the masks,” she said. The government gives the cleaners 50 masks a month but that was not enough because they got wet after 10 hours of use in the warm weather, Li said.

A department spokesman said workers had enough masks but could ask for more if needed.

While grateful to anyone who wanted to give the cleaners free masks, others needed them more, the spokesman said.