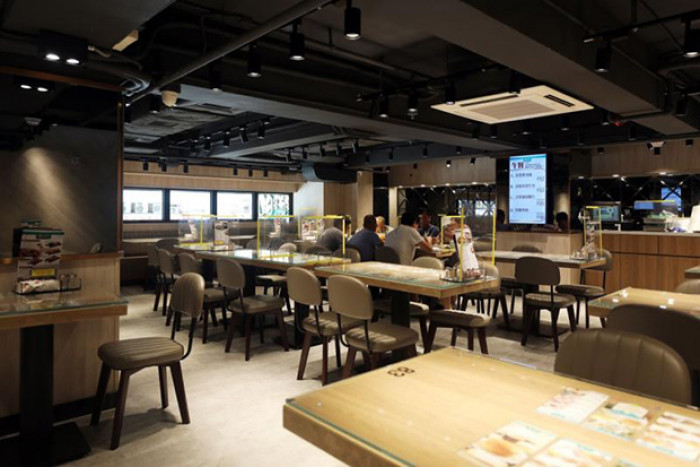 Hong Kong to extend social-distancing measures for another week

Hong Kong’s ban on eating in restaurants at night will continue for another week, as the city confirmed 44 new Covid-19 cases on Monday.
That came as a government adviser and top infectious disease expert warned against relaxing social-distancing measures, and revealed that the latest rise in the transmission rate for the coronavirus meant an infected person would spread the pathogen to one other individual on average.

Among the new infections reported on Monday, 31 were locally transmitted, including 20 that were linked to previous cases.

Chuang Shuk-kwan, head of the communicable disease branch of the Centre for Health Protection, said two more workers at Kwai Tsing Container Terminals were confirmed to be infected. But they were not related to Wang Kee Port Operation Services, which recorded 33 cases on Sunday.

One was a truck driver and the other a crane operator, Chuang said.

She also revealed that a 33-year-old patient, who was confirmed to have Covid-19 in late March and recovered in April, was found to be carrying the virus after a trip to Spain earlier this month. Dr Chuang said more investigations would be needed to determine why he was found with the virus.

“We are not sure if he had been carrying the virus all this time, or whether it was a new infection,” Dr Chuang said.

Meanwhile, confirming an earlier South China Morning Post report, the government announced that existing social-distancing measures, including a ban on gatherings of more than two people, and the mandatory wearing of masks in public places, would be extended until Aug 25, with the number of new infections each day remaining high.

“It has been over a month since the beginning of the third wave and the public is understandably starting to be fatigued by the social-distancing measures … However, it is not yet time for relaxation and there is no room for complacency in epidemic control,” the Food and Health Bureau said.

Despite the fact that the number of daily new cases had eased from its peak in late July, it remained at a significant level with the seven-day average still beyond figures recorded at the height of the second wave in March and April, a spokesman added.

“The stubbornly high proportion of new cases with unknown sources of infection at some 40% … indicates that silent or subclinical transmission chains are prevalent in the community,” he said. “It is highly worrying that such transmission chains persist despite extensive testing.”

As of Monday, the city had gone more than two weeks with fewer than 100 infectious per day. The total number of cases now stands at 4,524, with 69 related deaths.

Despite the slight drop in infections, and calls for a relaxation of the evening dining ban, the government had decided not to relax the measures. The ban restricts dine-in services between 6pm and 5am.

During the day, no more than two people can eat at the same table, and restaurants can only operate at half capacity.

Fourteen types of establishments, such as bars, gyms and sports facilities, will also remain closed for another week.

The arrangements were unveiled as the city prepares to launch mass Covid-19 screenings. But according to an email sent by the Food and Health Bureau to private doctor unions, the commencement of the scheme would be postponed to Aug 31, and last for two weeks.

The bureau mentioned in its recruitment email that it aimed to set up swabbing stations in 18 districts to provide tests conducted by health care professionals, while supervisory posts at the stations should be held by registered doctors, dentists or nurses.

For infection control, the government will provide protective gear such as surgical masks and gloves, as well as training to staff on proper procedures.

He said he was told that the government planned to hire about 2,000 private medical staff members, with each paid an hourly rate of HK$300 (1,200 baht) to HK$800. Swabbing stations would be set up in open spaces, including in shopping centres, playgrounds, and large community centres, he added.

Gabriel Leung, dean of the University of Hong Kong’s faculty of medicine who advises the government on its coronavirus response, meanwhile, told a press briefing that the transmission rate of the virus, which had shot up to as high as between three and four earlier in the local third wave, had started to rise again to about one, after dipping to around 0.5 three weeks ago.

Leung attributed the uptick to “anti-epidemic fatigue”, which he said could be shown in traffic data where Octopus card holders of all age groups had gone out more than in previous weeks.

“Now is definitely not the time to consider lifting off any measures, we are at a critical stage and must hold our nerve for at least two more weeks,” Leung said.

He said the success of the universal testing programme would depend on the demand and supply side of the equation, on whether it could attract a “sufficiently large” group of people, especially those in high-risk jobs or demographics, as well as a sufficient number of health care workers to do the tests.

Earlier, Hong Kong’s medical experts were divided on whether the ban on nighttime dining, which has been in place for more than a month, should be relaxed.

Public health advisers David Hui Shu-cheong and Ho Pak-leung warned a relaxation of the ban could potentially lead to a resurgence in infections, but Gabriel Choi Kin, president of the Hong Kong Medical Association, believed it could be “slightly relaxed”, as many restaurants were struggling financially.

All three experts said if the government decided to relax the ban, strict social-distancing measures must be in place to reduce the health risks.
#COVID  #COVID-19
Add Comment