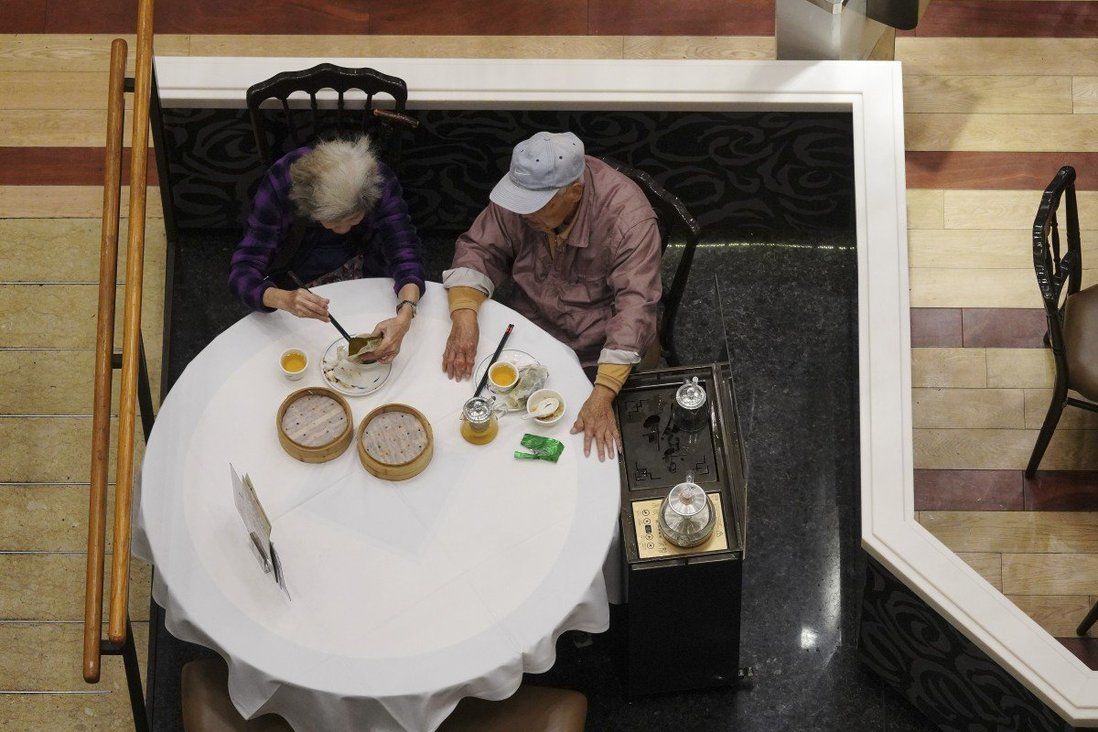 A government committee has backed the emergency use of the Sinovac vaccine in the city.

Hong Kong is set to ease tough social-distancing rules from Thursday for the first time since the onslaught of the fourth wave of Covid-19 three months ago, while experts advising the government on the city’s vaccine roll-out have recommended the emergency use of China’s Sinovac.

The announcements on the two fronts came on Tuesday as the city confirmed eight new infections, but also recorded about 20 preliminary-positive cases which would take the daily tally back into double digits on Wednesday.

Restaurants also received the green light to resume dine-in services until 10pm and accommodate up to four people per table.

But public gatherings would still be capped at two people, authorities said, citing the need for the Executive Council’s approval before allowing groups of four if the Covid-19 situation remained stable.

“Thanks to the hard work and cooperation of the whole of Hong Kong, the pandemic over the last month has become milder. You will have noticed local cases are now at low double digits, untraceable cases also show a downward trend and now are in single digits,” Secretary for Food and Health Professor Sophia Chan Siu-chee said.

“The latest developments and risk assessment have led us to believe we can steadily relax social-distancing measures … to let livelihoods resume in an orderly manner.”

Chan also noted that the real-time reproductive rate of the coronavirus locally was around 0.6, which meant an average of each infected patient transmitting the disease to fewer than one person.

Asked if the government had bowed to public pressure by relaxing social-distancing measures, given the potential for another uptick in cases after officials warned of a rebound after the Lunar New Year holiday, Chan said the decision was based on risk assessment. 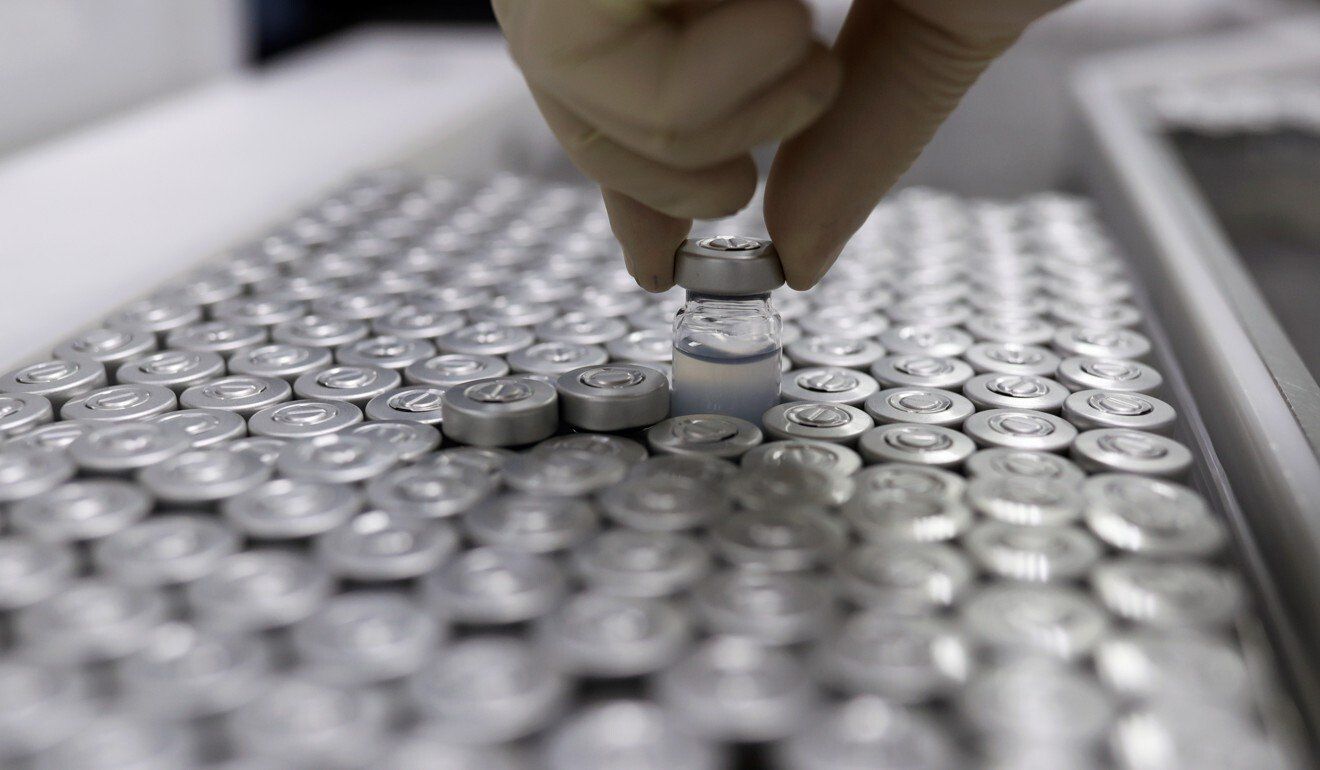 Experts recommended the Sinovac vaccine for emergency use.

“We felt that it was time to gradually reopen some, not all, of the scheduled premises and also allow evening dine-in services for catering businesses. Of course we will continue to monitor the situation day by day,” she said, adding that the measures would be tightened again if major clusters emerged or the real-time reproductive rate of the coronavirus rose significantly.

The relaxed measures come with new conditions such as compulsory testing for employees of the reopened businesses every two weeks, and a requirement for these workers to ensure customers used the “Leave Home Safe” Covid-19 risk exposure app at their premises, or provided names and phone numbers for potential contact-tracing purposes.

Catering establishments that breach the rules will have to revert to two people per table and end dine-in services at 6pm, while other venues will be required to shut down. The penalties will apply for three, seven or 14 days, depending on the severity of violations.

Party rooms, bathhouses, bars, karaoke lounges, swimming pools and mahjong parlours, however, were left out of the first round of the government’s reopening plan.

Chan did not explain the rationale behind that decision, saying only that the government needed to proceed with caution and be on the lookout for any rebound in infections after Lunar New Year.

“I don’t think the next phase of relaxation will be very soon,” she added, referring to the other types of venues. 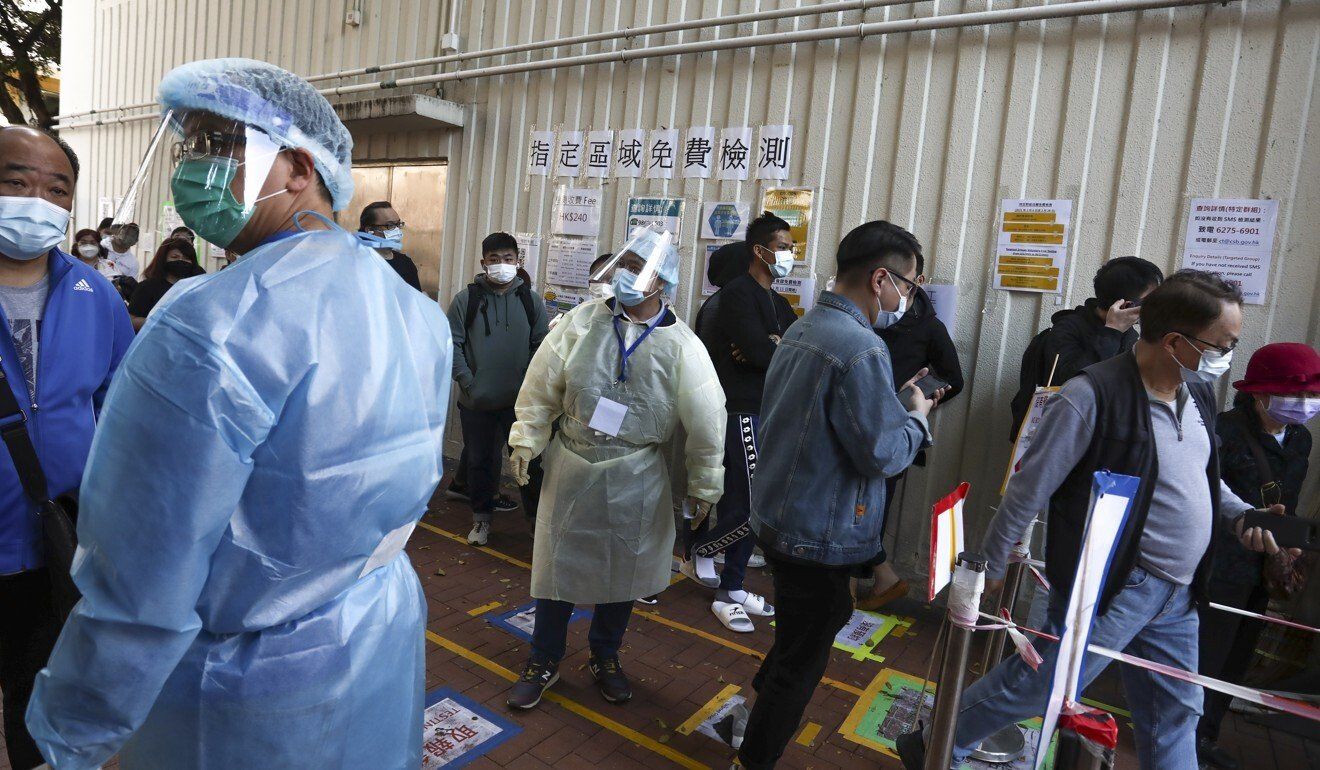 Restaurant sector figures have called for mobile testing centres to be placed in neighbourhoods where large numbers of eatery employees must be screened.

On Tuesday evening, Professor Wallace Lau Chak-sing, convenor of the government’s advisory panel on Covid-19 vaccines, revealed that experts had met and unanimously given their recommendation for China’s Sinovac jabs to be used in emergency situations.

The firm had submitted latest data showing an overall efficacy rate of 50.66 per cent, which rose to 62.3 per cent following a second dose within 28 days from the first.

Lau denied the panel was under political pressure to approve the vaccine, defending the decision despite the firm not having published its data in a medical journal, and the World Health Organization (WHO) not yet giving separate advice on the jabs.

He said members had peer-reviewed the latest data from the company. The experts also determined the jab met WHO guidelines, which set out the minimal clinical criteria a vaccine must meet before gaining approval.

As Hongkongers returned to their jobs after a four-day Lunar New Year break, restaurant and construction employees were among those seen in queues across the city to get a Covid-19 test, ahead of new requirements by the government to do so before work.

With the city potentially seeing the end of the current round of Covid-19 infections, health officials also stepped up their contact-tracing efforts, quarantining more than 70 employees who recently worked with an infected firefighter at Kwai Chung Fire Station. That followed recent precautionary, large-scale quarantine operations for more than 130 students and staff at a school and over 20 employees and guests at public broadcaster RTHK.

Of Tuesday’s eight infections, six were locally transmitted, including three which were untraceable, involving the firefighter, a 38-year-old housewife in Diamond Hill and an eight-year-old girl who lives in Kwai Chung. The two imported infections were from the Philippines.

The second straight day of single-digit infections brought the overall tally to 10,796 cases with 195 related deaths, including the latest fatalities, two elderly patients. 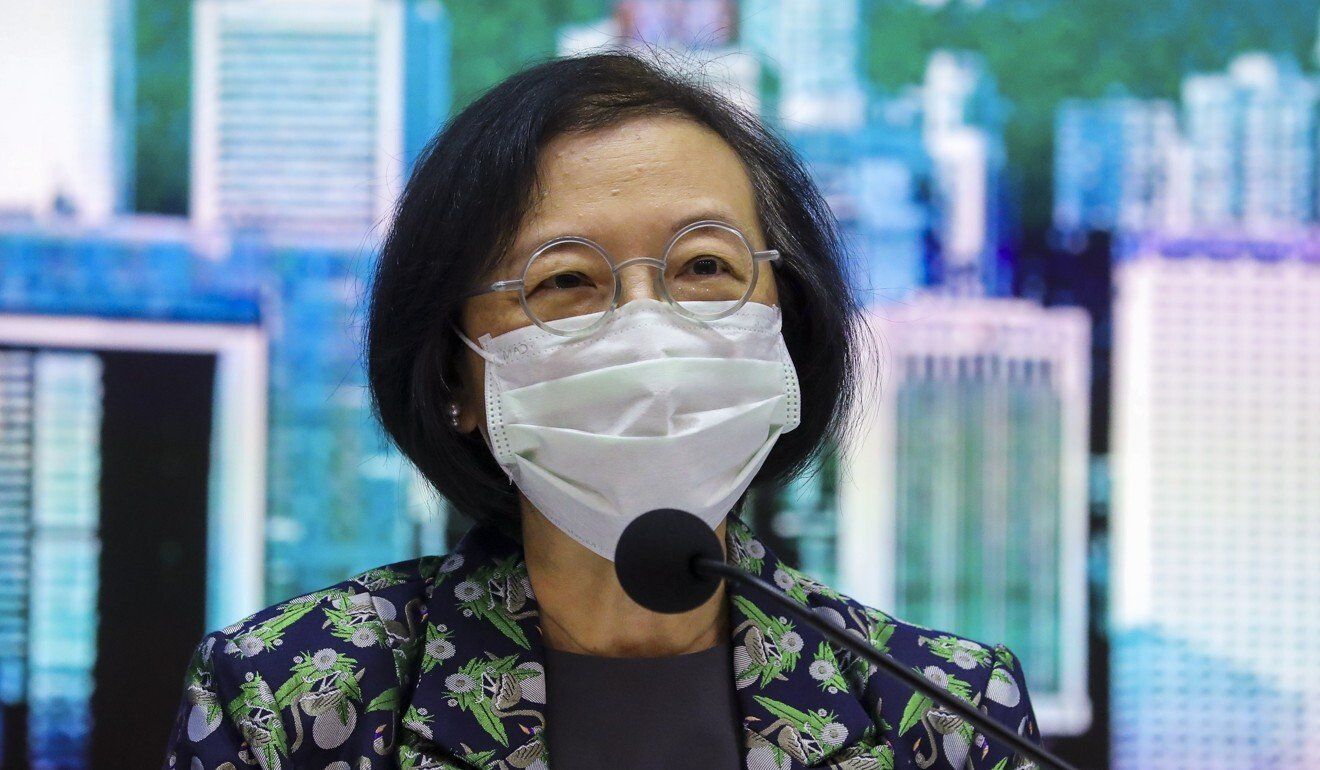 Although the fourth wave, which began in November, has shown signs of easing recently, respiratory medicine specialist Dr Leung Chi-chiu warned the figures could go back up again as Hongkongers returned to work after the break.

“Increasing testing and getting the results out quickly are critical over the next few days to avoid a rebound in cases. This will help cut off transmission chains before everyone goes to the reopened venues,” he said.

But Leung said penalising restaurants or other venues over non-compliance with measures would not be effective in preventing the spread of Covid-19. “It’s not very useful because penalties are retrospective, so it won’t change anything if an infected person had already spread the disease [on the premises],” he said.

Simon Wong Ka-wo, president of the Hong Kong Federation of Restaurants and Related Trades, told a radio programme that business for the city’s catering industry had been quite good over Lunar New Year but still down about 30 to 40 per cent from previous holidays.

On the new requirement that restaurant employees be tested every 14 days, he urged the government to arrange for mobile testing centres in areas with many restaurants, including in Yau Tsim Mong and Causeway Bay.

Of the city’s 19 testing centres, only two still had online booking slots available for Thursday, while three had none available until Sunday at the earliest. 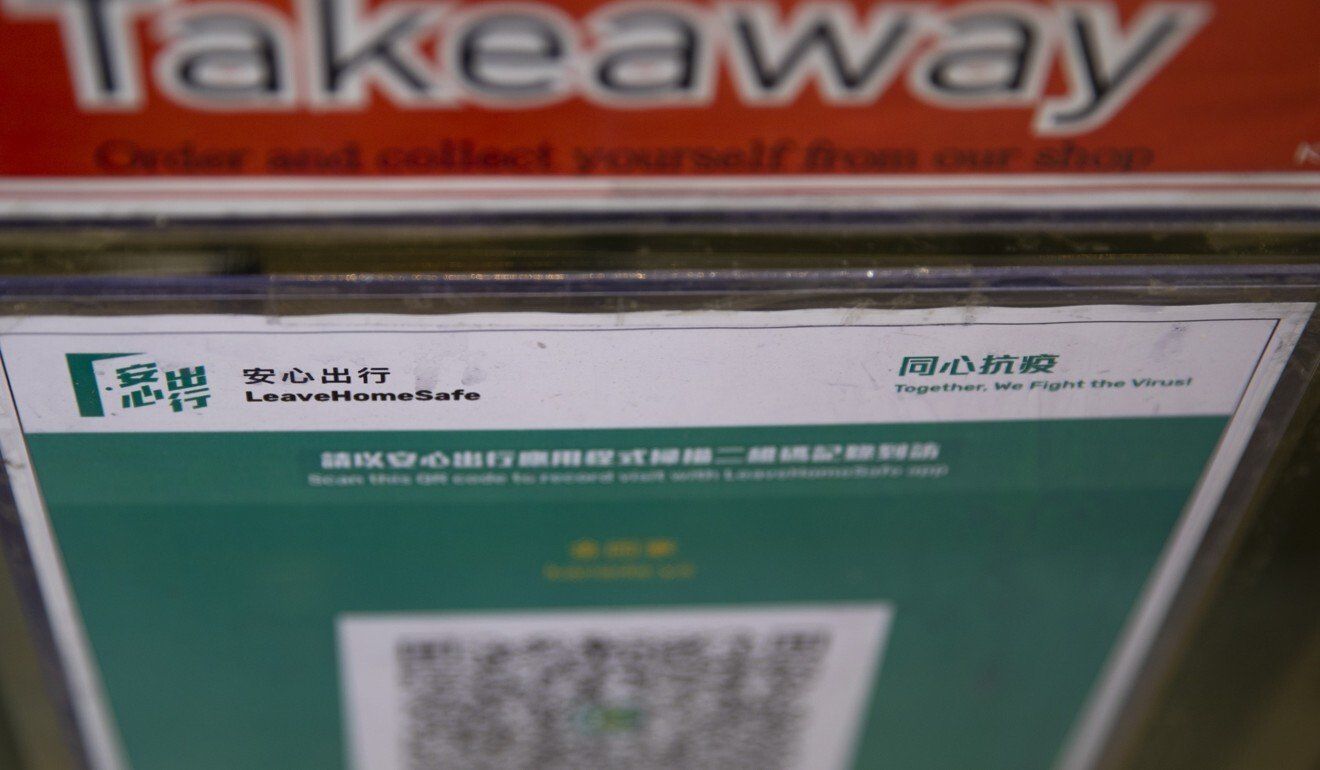 An eatery displays QR codes for the government’s contact-tracing app.

About 67,000 people took a Covid-19 test at one of the city’s testing centres over the first three days of the Lunar New Year break.

Similar testing rules are to be put in place at building sites from next Monday, with workers required to present negative test results. They must also be screened every two weeks. Some construction sites have already imposed this requirement.

Outside Quarry Bay Community Complex, workers queued for tests before the relaxation of social-distancing measures. They said the community testing centres were the preferred screening method as they would receive confirmation to show their bosses if they tested negative.

“They said online that restaurant workers could get tested for free, but now I must pay the full HK$240 if I want to get tested earlier,” a man surnamed Ng said.

He had managed to book a slot for Friday, but was asked by his boss to get tested earlier so he could start working once the restaurant reopened.

“I don’t know what to do now. My boss is kicking up a fuss but I can’t pay this fee. I haven’t had work for two months,” Ng said.

A woman, also named Ng, said she too was asked by her bosses at a construction site to get tested before Thursday.

“I am not sure what to do now. They said construction workers can only book online, so I don’t think I will get a slot even if I go to other centres in Wan Chai or Yau Tong,” she said.

“Of course I hope there can be dedicated testing centres for us, but right now I just want to know what I can do.”

Responding to a rush from residents to get screened for Covid-19, Chan said the government would distribute more than 50,000 test kits daily, a 25 per cent increase, boost the number of slots at community screening facilities and set up more mobile testing centres across the city.