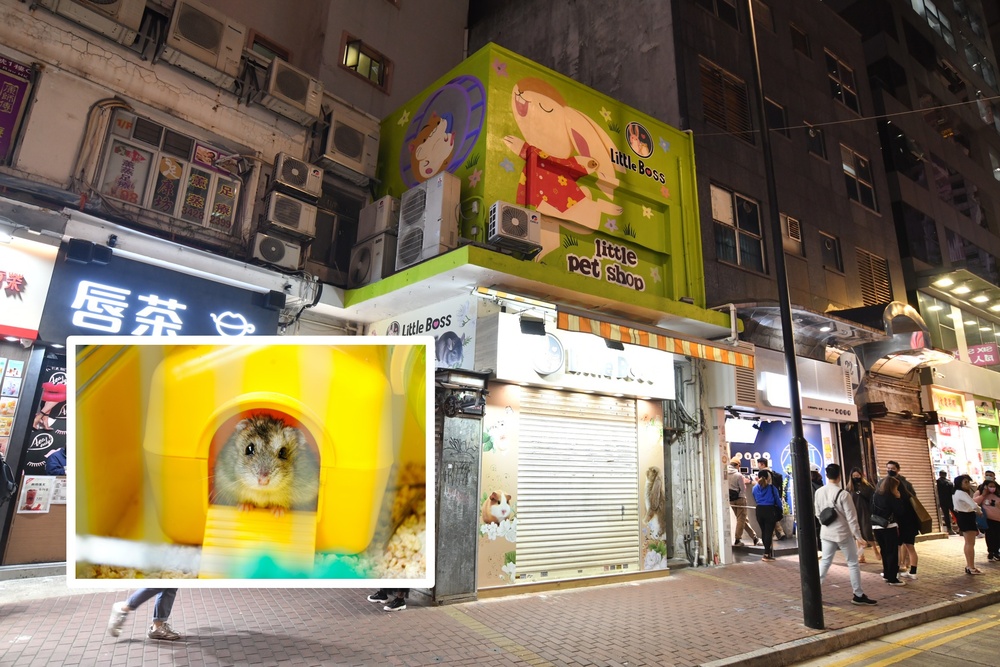 The Hong Kong government will kill all hamsters being sold in pet shops after several hamsters at a Causeway Bay pet shop tested positive for Covid-19 – the world's first such observation.
An estimated 2,000 hamsters will be killed, including those at 34 local pet shops, as officials call upon citizens to surrender hamsters bought since December 22.

All animals including rabbits and chinchillas at the Causeway Bay pet shop and the shop's Tai Po storage house will also be killed, although none tested positive as of Tuesday afternoon.

The decision to cull the animals came as authorities have yet to scientifically confirm whether hamsters can infect humans.

The hamsters from Little Boss pet shop tested positive for the coronavirus after an employee and a 67-year-old customer were diagnosed with Covid. The customer's husband also tested preliminarily positive for the virus today.

At a regular press conference on Covid-19, Centre for Health Protection's Chuang Shuk-kwan said the customer's daughter bought a hamster at Little Boss on January 4. She headed to the shop on January 8 to exchange a cage and purchase pet food. The infected staffer took her cash.

They also took 511 samples in the Tai Po storage house. Some environmental samples, including cages, tested positive. Other results are still pending.

Director of Agriculture, Fisheries and Conservation Dr. Leung Siu-fai said the two batches of hamsters in question were imported from the Netherlands on October 22 and January 7.

Leung said over 1,000 hamsters sold at the city's 34 hamster-selling pet shops will be put down, along with another 1,000 small animals from the Tai Po warehouse.

Leung also urged customers who purchased any hamsters in Hong Kong since October 22 to hand over their hamsters to health authorities while the owners of the pets will be subjected to mandatory Covid testing.

Asked if the government made a rash decision to kill all hamsters and disrespect life, officials said they acted out of public health concerns.

“We have assessed the risks of these batches are relatively high and therefore made the decision based on public health needs,” Leung said.

Hamster owners will be sent to Penny’s Bay quarantine center if their pets test positive before being culled. But he said those who refuse to hand pets to the Agriculture, Fisheries and Conservation Department will not be breaking break the law.

Asking people to hand hamsters to the AFCD was not a way to confiscate pets, Leung said. "It's just our appeal." There were also appeals for owners not to abandon hamsters on the street and for people to maintain hygiene after touching their pets.

An assistant director of agriculture, fisheries and conservation, Thomas Sit Hon-chung, said no animal-to-human transmission has been recorded anywhere.

“But you need to realize and understand that now the hamsters have been infected they can infect other animals -- other hamsters and human beings. So we don't want to cull all the animals, but we need to protect public health and animal health. We have no choice."

Officials said while there was no report of hamsters getting infected outside of laboratory settings, previous experiments show they can be infected by Covid-19.

The possibility of hamster-to-human transmission aside, authorities don't rule out that the pet shop customer could be infected by the staffer.

Government advisor Yuen said European countries culled tens of thousands weasels after they found the animal can be infected with Covid-19.

Yuen said it was worrying that genetic mutation was detected at the pet shop samples.

“It is a big issue. If Hong Kong churns out a strain of Covid-19 related to hamsters and it turns out to be more transmissible, it will be bad,” he said in support of the government's decision to kill the hamsters.

The Society for the Prevention of Cruelty to Animals said it was shocked by the government's decision, which “did not take animal welfare and human-animal bond into consideration.”

SPCA hoped the department won't take any drastic action before reviewing its approach, and said they will liaise with the department through different channels and discuss on alternative approaches.
#Coronavirus  #COVID-19  #Covid
Add Comment