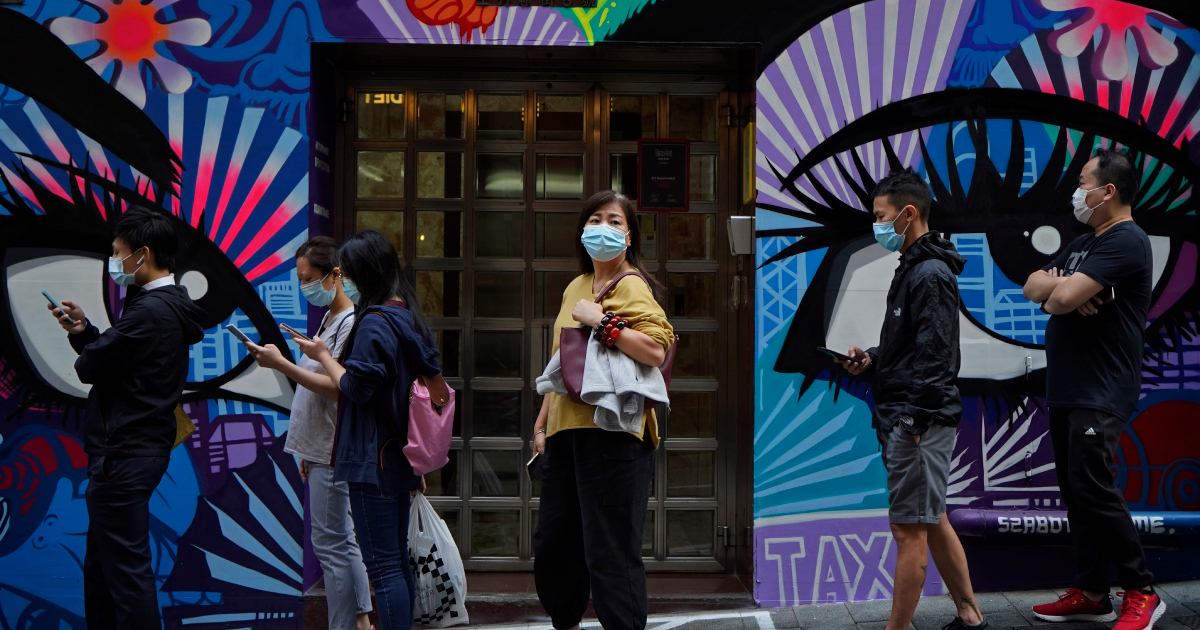 Carrie Lam, the chief executive of Hong Kong, announced the new measures on Monday, a day after the city reported 115 new cases – its biggest jump in daily coronavirus infections since August.

The new curbs are the strictest Hong Kong has seen since it beat its third wave over the summer.

“This new wave of COVID-19 has hit Hong Kong very quickly,” Lam said. “It is not as bad as late July yet but anticipating the situation, we should go back to the toughest measures we have ever introduced.”

The Hong Kong leader also ordered the closing of bars, karaoke bars, mahjong clubs and theme parks, and said civil servants will be working from home for the next two weeks.

She also said the government was considering increasing fines for violations of the new rules, singling out at those who have pursued close-contact dancing at ballroom dancing venues.

“Even if party rooms were closed, they went to other private places to have parties, they danced in close contact,” said Lam. “That is when we decided that perhaps the 2,000 Hong Kong dollars [$258] fine at the moment does not serve the purpose of deterring people from these sort of activities, so we need to raise the fine.”

Some 62 of Sunday’s cases were linked to Starlight Dance Club, a dance venue favoured by wealthy women seeking lessons from young male instructors. The figure takes the total number of infections in that cluster to 479.

Dr Chuang Shuk-kwan, who heads the Communicable Disease Branch at the Centre for Health Protection, warned on Sunday that the latest outbreak in Hong Kong was “taking a turn for the worse”.

“We are seeing a rapid resurgence in cases – many of them have been linked to gatherings; weekly family gatherings, several families coming together or gatherings between friends,” she told reporters.

Unlike Hong Kong’s third wave – which was linked to groups of people who were exempted from the 14-day quarantine when they entered Hong Kong – the latest outbreak was more “widespread” in the community, said Chuang. Those affected include cleaners, hospital staff and residents at elderly care homes.

Other clusters were linked to restaurants, some visited by members of the Starlight Dance Club, as well as “staycations” – group vacations at local hotels.

Worrying as well was the rising number of untraceable cases, where health authorities are unable to track infection chains, said Nicholas Thomas, an associate professor at City University of Hong Kong who focuses on health security in Asia.

Thomas said Hong Kong may be forced to take “more drastic action” if the rate of new infections kept rising.

The city has so far avoided hard lockdowns seen elsewhere, such as in mainland China, choosing to control its epidemic through mandatory mask-wearing, aggressive contact tracing, and the tightening and loosening of physical distancing rules in response to the rise and ebb in infections.

But after a year of erratic curbs, public fatigue is growing and Hong Kong’s government is facing criticism over confusing, and at times, seemingly contradictory rules.

The owner of a restaurant on Lamma Island said the limits set on public gatherings had made for bizarre arrangements this year.

“A couple of weeks ago, they limited [social gathering] rules to four people on the street but six people can eat in a restaurant. It’s very confusing not only to the ones who run the restaurant but to [everyone]. So, on the street, they have to separate into groups if they are six people but once they enter the restaurant they can sit together,” said Ron, who asked to be identified only by his first name.

Thomas, the public health expert, also said the changing rules may be to blame for the fatigue.

“Relaxing the rules traps societies into cycles of some sort of normality, lockdown, normality. The issue is that people get tired of following the rules, so they see the rules as not working and they lose trust in the efficacy of the process,” Thomas said, noting that hard lockdowns in New Zealand and Australia allowed local governments to buy time as they dealt with emerging clusters.

“There needs to be awareness in government that they need to take a greater hit of the pain upfront, otherwise they are opening themselves up for not only people not following the rules but greater economic disruption in the medium term,” he added.

A proposed “mini travel bubble” with Singapore, which would have allowed for air travel between the two cities, has also been postponed following the rise in cases.
#COVID-19  #Covid  #Coronavirus
Add Comment