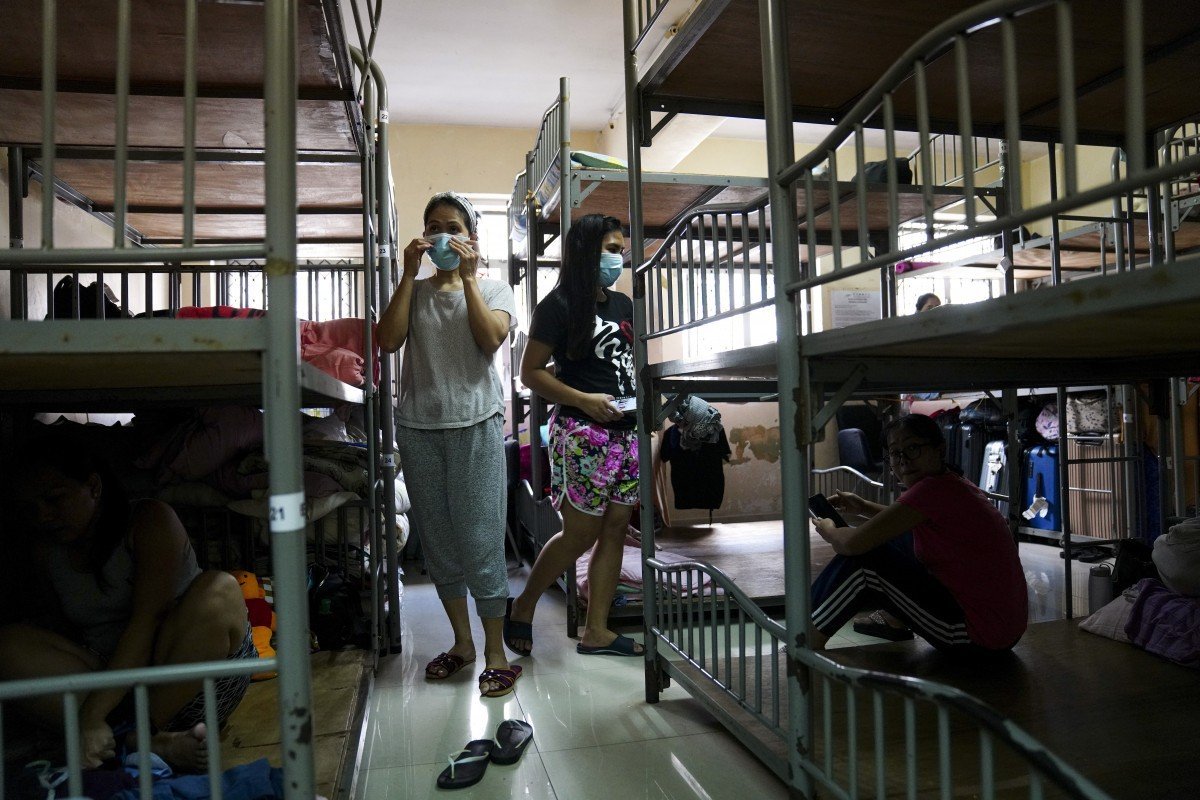 As many as 51 foreign domestic helpers have come into contact with a pair of maids whose infections sparked fears of a wider outbreak in their employers’ households and the migrant worker community at large, Hong Kong health authorities revealed on Thursday, as they confirmed 95 new Covid-19
infections.

The fresh cases, which bring the city’s total to 3,849, marked the fourth straight day with fewer than 100 – still significantly higher than during March’s second wave, which peaked at 65. More than 60 people also tested preliminary positive on Thursday and are awaiting further test results.

A day earlier, health officials mounted a track-and-trace operation after it emerged that an Indonesian maid infected with Covid-19 had shared often crowded accommodation with numerous other workers, some of whom had since moved into their employers’ homes.

On Thursday, Dr Chuang Shuk-kwan, head of the Centre for Health Protection’s communicable disease branch, said authorities had identified another 13 domestic workers who had stayed with the Indonesian national in a North Point dormitory managed by Sunlight Employment Agency on July 20 and 21.

The patient, who left her employer on July 20 to look for a new job, went on to stay at accommodation arranged by the KL Home Care agency at the Fook Gay Mansion in Wan Chai from July 21 to 25 along with 28 other domestic workers.

From July 29 to August 1, the patient lived with four other maids at the Causeway Bay Commercial Building, as arranged by the Perfect Maid Centre agency. Five women who used the toilet on the same floor but are not employed by the company have also been identified as close contacts.

But Chuang corrected a statement she made on Wednesday, clarifying that only one of the 28 maids from Fook Gay Mansion had gone to work for new employers, adding that testing had been arranged for all the helpers involved.

The authorities are still investigating where the patient was living between July 26 and 28.

Chuang also revealed that another Indonesian helper, who had lived with four to six maids between July 1 and 31 in a flat managed by the APIK Employment Agency in Sheung Wan’s Kin On commercial building, was among Thursday’s preliminary positive cases. She went to work for her new employer on August 1.

The health official said the patient developed a fever on August 4 and was taken to the accident and emergency department by her employers. She is now awaiting her test results at the Holiday Inn Express Hong Kong Kowloon East Hotel in Tseung Kwan O.

“We are worried there’s a possible outbreak in these hostel settings, because Singapore had a similar experience. These hostel settings are usually crowded, with shared facilities where it is easy to transmit Covid-19,” Chuang said.

In April, a second wave in Singapore was largely driven by an outbreak among migrant workers living in crowded accommodation. By August, nearly 50,000 of the city’s 330,000 migrant workers had contracted the virus.

Seeking to limit the growing fallout, the government in a late statement announced it would expand its testing to cover foreign domestic helpers living in accommodation provided by agents. The testing will be conducted by Prenetics Limited.

It said it would also distribute masks from August 8 to 10 to those helpers via their agencies. The statement also urged domestic workers to stay at home on their rest days, saying law enforcement would strengthen patrols and strictly enforce social-distancing rules.

All but four of Thursday’s new cases were locally transmitted, while 52 were linked to previous cases. Officials were still tracking the source of 39 infections.

Among the confirmed cases were two residents of King Fok Limited, a home for the elderly on Sham Shui Po’s Shun Ning Road; one at Jockey Club Harmony Villa in Wong Chuk Hang; and another at Cornwall Elderly’s Home (Golden Branch) in Tuen Mun.

A resident at the Hong Kong Society for the Aged Kai Yip Home for the Elderly in Kowloon Bay also tested preliminary positive for the virus.

An 85-year-old patient at Tuen Mun Hospital, meanwhile, became the city’s 44th death related to the virus, according to the Hospital Authority. The latest fatality, who suffered from a chronic illness, became the sixth resident of Cornwall Elderly’s Home (Golden Branch) to die, a cluster that has seen 40 infections to date.

An 86-year-old man who died in Princess Margaret Hospital in Kwai Chung on Tuesday but only later identified as a Covid-19 victim was classified as the city’s 45th fatality by health officials.

The city’s third wave of infections has so far hit at least 18 elderly homes, with the most serious cluster at the Kong Tai Care for the Aged Centre Limited, which has recorded 45 cases and nine deaths.

The latest figures came as the government announced that civil servants, with the exception of emergency and essential workers, would continue to work from home for at least another week, until August 16.

Meanwhile, authorities will extend the scope of a free Covid-19 testing scheme on Friday to include an additional 46 buildings and about 86,000 residents in Hong Kong’s Wong Tai Sin, Kwun Tong, Tuen Mun and Yau Tsim Mong districts.

Earlier in the day, University of Hong Kong microbiologist Dr Ho Pak-leung, a frequent advocate of tough anti-pandemic measures, said an urgent response of large-scale testing for all helpers living in agents’ boarding houses was required, referring to the Indonesian national confirmed on Wednesday.

“The virus won’t wait for you, and the government needs to do it fast to avoid an outbreak in this type of accommodation, like the situation in Singapore before,” he said on a radio programme.

Ho estimated there were about 7,000 helpers living in agents’ accommodation in Hong Kong, adding that, as they might hang out with other maids on their days off, there was an urgency to carrying out testing.

“To avoid possible violation of the two-people public gathering ban, police should patrol these areas where the helpers hang out, and if they stay as a group, police should raise a blue warning flag to disperse them,” he added.

Ho also criticised the government, saying it should have foreseen such an outbreak.

Eni Lestari, a spokeswoman for the Asian Migrants Coordinating Body, has appealed to Hongkongers not to use this episode to discriminate against the city’s 400,000 helpers.

Appearing on the same radio programme as Ho, Betty Yung Ma Shan-yee, chairwoman of the Hong Kong Employers of Overseas Domestic Helpers’ Association, said some employers were worried about their helpers going out on their day off.

“The employers cannot forbid their helpers from going out, they can only remind them to take adequate preventive measures and to abide by the public gathering rules,” she said.