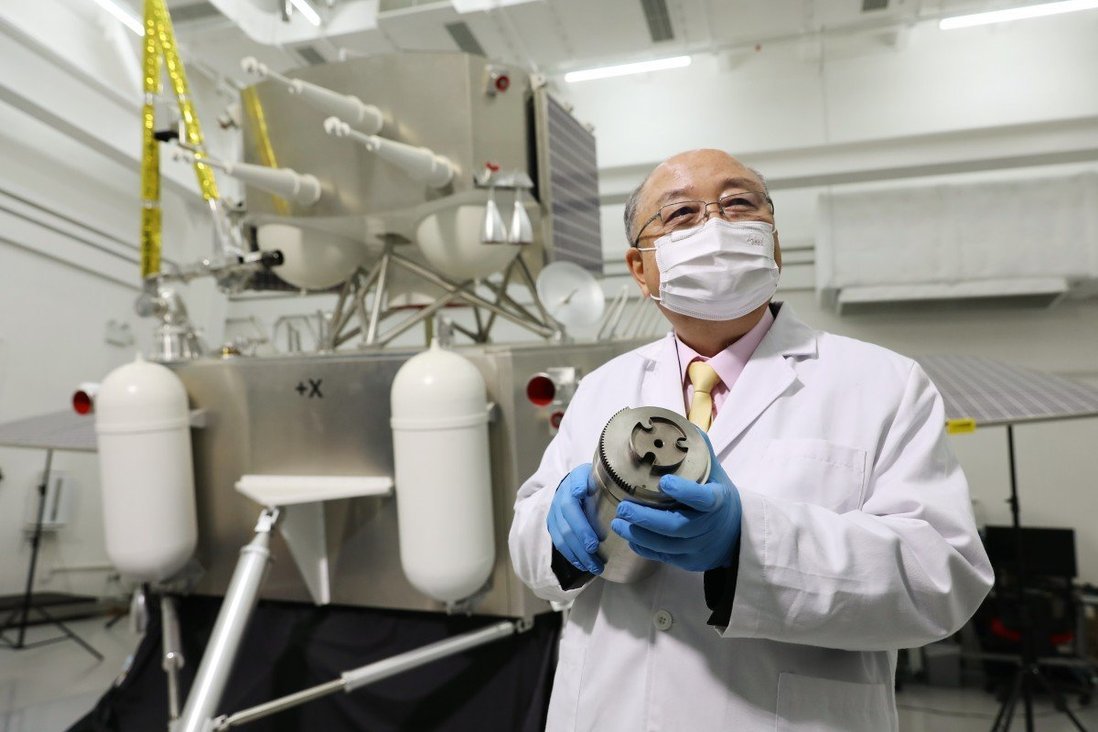 PolyU team who developed scoops and container for China’s lunar craft to assess whether adjustments are needed for the next mission, as samples arrive on Earth.

The Hong Kong researchers at the centre of China’s mission to collect lunar rock samples said they felt a “big relief” after the arrival of the samples back on Earth on Thursday, but they added that their space quest was far from over.

The research team at Hong Kong Polytechnic University, led by Professor Yung Kai-leung, developed the sampling scoops and sealed container used by the Chang’e 5 mission to collect and bring back surface soil and rocks from the moon – the first collection of lunar samples for more than four decades.

“The [Chang’e 5] mission has ended, but not our project … We will compare the data collected on the moon with our design parameters and evaluate any improvements that may be needed to our design for the Chang’e 6 mission,” Yung said in a press conference on Thursday at the university campus.

Chang’e 6, China’s next lunar mission, is expected to launch in 2023 or 2024, and will again feature the Hong Kong-developed sampling system.

The 2kg of surface samples and a further 500 grams of underground samples brought back by the return capsule, which landed in the northern Chinese region of Inner Mongolia, were due to be unpackaged in a special facility in Beijing to prevent contamination.

Yung expressed hope that PolyU would have the chance to obtain a quantity of the samples for scientific research, and called for support from Hong Kong’s government and public to set up the necessary facilities and research teams.

“PolyU has put in a lot of effort in helping the country to obtain the regolith. We do hope we could share some of the samples for further research,” Yung said, citing potential studies from geological and engineering fields to the discovery of new materials and even signs of life from volcanic moon soil.

Yung explained that new facilities would be needed to house samples if the mainland government agreed to share them.

“It needs to be kept in a sealed environment filled with high-purity nitrogen,” he said. “We would also need special equipment and measuring instruments for researchers to work on the samples in isolated conditions.”

Extreme polar temperatures may present extra engineering requirements such as heat insulation to ensure proper functioning of the components, Tam said. The existing system could withstand temperatures ranging from about 200 degrees Celsius (392 degrees Fahrenheit) to minus 100 degrees Celsius.

The maximum volume of samples that Chang’e 6 could collect is expected to be the same as for Chang’e 5. Yung said one reason was the expected payload of the rocket used to launch it. The Chang’e 5 mission used Long March-5, the latest heavy-lift rocket, and a superheavy-lift vehicle, Long March-9, is still in development, with its test launch expected in about 10 years’ time.

PolyU’s scoop and container system performed well during the mission, Yung said. It surface sampling work had been expected to take over 30 hours, but was completed in about 20.

Yung said PolyU intended to bid to participate in future space missions, such as Chang’e 7 and asteroid missions.