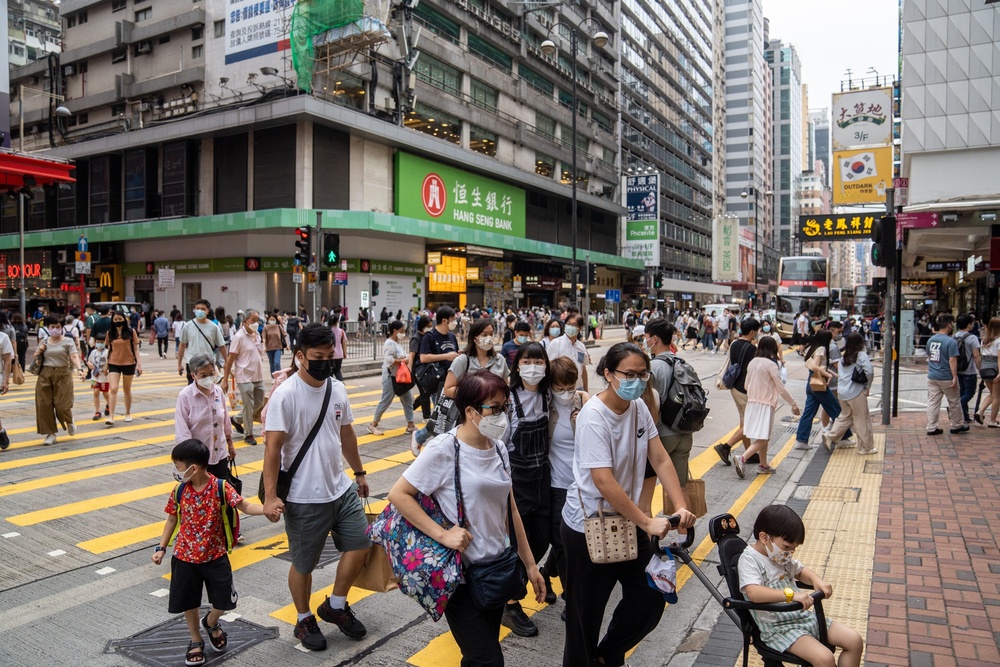 Hong Kong swims while the mainland sinks, much to Beijing's chagrin

As Chinese cities such as Shanghai and Beijing stick ever more closely to Covid Zero principles, no matter the economic cost, Hong Kong is methodically moving toward opening up to the rest of the world.
On Tuesday, the government brought forward a plan to ease social distancing rules, allowing people to go mask-free when exercising outdoors and doubling the maximum number of diners per table to eight. That came two days after Hong Kong ended a two-year ban on visits by all non-residents and eased some restrictions on inbound flights.

The moves reflect a broader push by influential figures in the city to focus on retaining Hong Kong’s appeal as an international financial hub, particularly as President Xi Jinping’s rigid Covid Zero strategy leaves little prospect of opening the land border with the mainland.

While Hong Kong’s pro-establishment leaders still see eye-to-eye with Beijing on clamping down on democracy advocates, they are becoming more assertive in pushing the boundaries of what’s possible on reopening for a government that ultimately must report to Xi. That has made them more responsive to demands from business groups to make travel easier and more predictable, even if they’re unlikely to go as far as lifting the seven-day hotel quarantine for inbound travelers this year.

“Hong Kong is moving towards the direction of opening -- we can see this in the increasing discussions around connectivity to the rest of the world and the loss of talented people,” said Dongshu Liu, an assistant professor specializing in Chinese politics at the City University of Hong Kong. “A few months ago, the government didn’t want to admit that the strict Covid policy was hurting Hong Kong, but now they appear to be admitting it. It’s very difficult to go back to zero Covid -- the public won’t accept it.”

The case for Hong Kong to reopen is building. Its economy contracted 4 percent in the first quarter from a year earlier, data Tuesday showed, far worse than the 1.3 percent median estimate of analysts in a Bloomberg survey. Retail sales collapsed 14.6 percent in February, while the jobless rate for the January-to-March period surged to the highest level in nine months. Adding further pressure, the city will be forced to match interest hikes by the U.S. Federal Reserve due to a currency peg to the greenback.

Investor confidence in the city has been damaged. The benchmark Hang Seng Index of stocks has plunged 11 percent this year, while the Hong Kong dollar is trading perilously close to the weak end of trading band against the dollar.

It’s not just capital flowing out. Another 153,000 people left Hong Kong this year, five times the amount for the whole of 2021, according to official data compiled by investor David Webb.

Some are now coming back. For the first time in almost six months, weekly arrivals are outpacing departures. The government’s case for easing restrictions has been bolstered by an ebbing Covid wave and rising vaccination rates. New daily infections have dropped below 300, from more than 52,000 at the peak in early-March. About 85 percent of the population aged 3 and up have had at least two doses, and almost half have had three.

On Wednesday, Citigroup Inc. economists upgraded their growth estimates for Hong Kong’s economy in the second quarter to 2.4 percent from 0.3 percent, citing the quicker-than-expected relaxation of Covid restrictions and drop in infections. A “genuine” recovery “depends ultimately on the resumption of quarantine-free travel” between Hong Kong and China, Citi economists led by Adrienne Lui wrote in a note.

Hong Kong’s remaining restrictions still grate. Mask wearing is mandatory, and violators are subject to a HK$5,000 (US$637) fine. The risk of flight route suspensions adds stress to travel, while hotel quarantine is costly and an obvious deterrent to visitors. The construction of tens of thousands of isolation units, similar to those used on the mainland, has raised concerns that the city will never fully abandon Covid Zero.

“The biggest question is how far away from the China approach can Hong Kong deviate,” said Simon Powell, a Hong Kong-based equity strategist at Jefferies Group. “That’s a political question at the heart of Hong Kong’s future – if ‘One Country, Two Systems’ is really in place then in theory it can deviate a great deal and to some extent it has. But a clear indication of Hong Kong not following the China line would be the dismantling of community isolation facilities, and we are not witnessing that yet.”

The city’s approach to Covid has shifted dramatically since the start of this year when the government ordered the culling of pet hamsters to prevent the spread of the virus and more than 200 diners at a single restaurant were sent to a quarantine camp for three weeks because of a cluster.

In the biggest departure from China’s Covid-Zero policy, infected residents are able to isolate at home. Outgoing leader Carrie Lam said last month the city will continue with this more relaxed approach, calling it “rational” and saying any change would cause “uncertainty and confusion.” That’s a sharp contrast to Shanghai and other cities on the mainland, where isolation in a centralized center is mandatory. Instead, Hong Kong is mothballing most of its isolation centers, Lam said last week. The finance hub also never opted to lock down or mass test, breaking further Covid-Zero principles.

Yet, while Hong Kong has inched toward a living-with-Covid approach, even if officials dispute that characterization, other global financial centers have done much more. Cities such as Singapore, New York and London are basically back to normal, making Hong Kong look like it’s stuck in the past.

How Hong Kong can maintain its position as an international city while adhering in some way to Xi’s Covid-Zero policy will be a major challenge for Lam’s successor, John Lee. The former police officer, who is running uncontested for the chief executive role, will take charge on July 1, the 25th anniversary of the handover to China. Whatever he picks as his priority will decide whether Hong Kong reopens or stays effectively behind the wall -- but still closed to the mainland.

Inbound quarantine will be the major test. Beijing is already unhappy with the reduction to seven days, according to Michael Tien, a National People’s Congress deputy and city lawmaker. To go lower than seven, “forget it,” he said.
#Covid
Add Comment