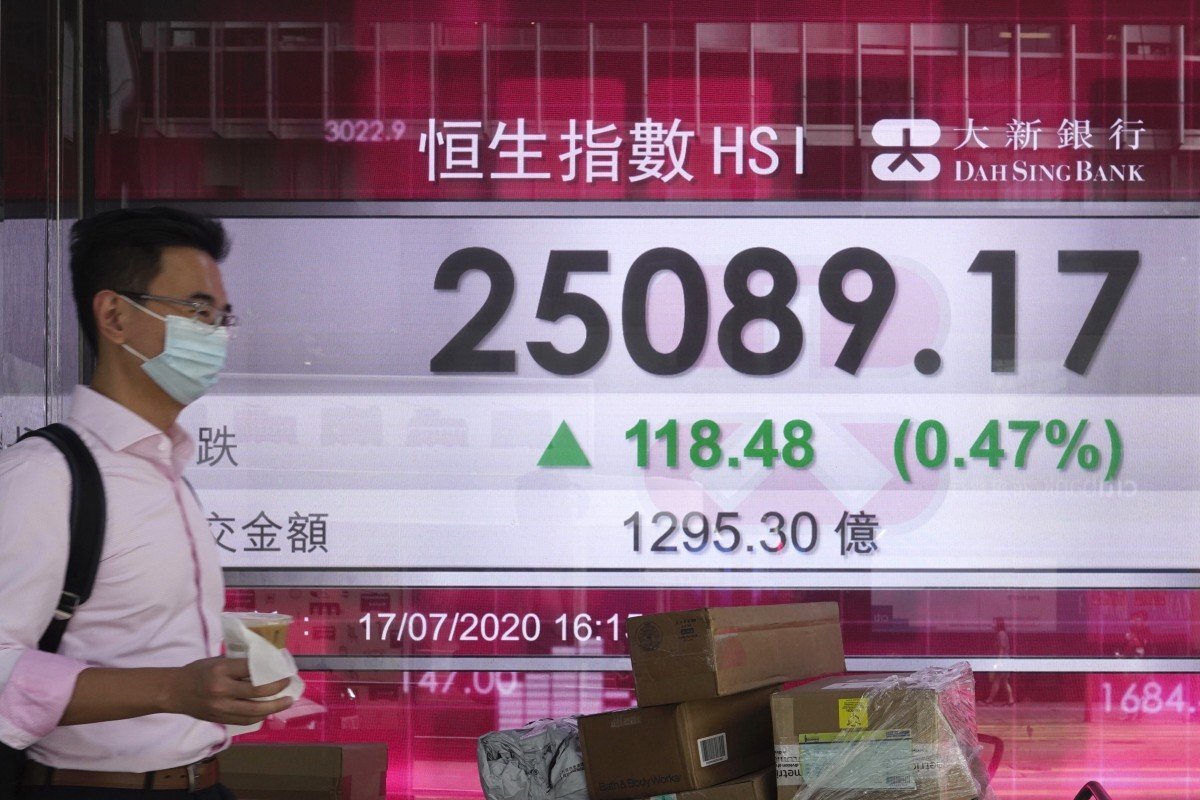 China stocks slide on closing of US consulate, but Hong Kong shares recoup some of the big losses of previous session

Hong Kong shares gain back some of the 2.3 per cent lost on Wednesday on stunning headlines of latest flashpoint between Washington and Beijing. Mainland stocks slide a bit. But traders are still waiting for Beijing’s response

Hong Kong stocks gained back some of the previous session’s sharp losses on Thursday while China’s shares slipped as deteriorating US-China relations remained firmly in the spotlight after Washington told Beijing to close its consulate in Houston.

Until late in the Hong Kong trading session on Wednesday, traders had been focused on the coronavirus, balancing progress in vaccine trials and global stimulative steps against a spike in cases in the US – home to the largest number of deaths – and the city. Overall sentiment was good, buoyed by Ant Group’s plan to dual list in Hong Kong and Shanghai as well as news of a new Hang Seng Tech Index.

But that quickly changed when the Donald Trump administration moved to close the Houston consulate over claimed theft of intellectual property, pushing US-China tensions back into the driver’s seat of market sentiment.

With the news hitting traders after the close of mainland’s markets on Wednesday, China’s stocks, which have staged a world-beating rally this year, did not have a chance to react.

But on Thursday, the Shanghai Composite Index fell by as much as 2.3 per cent in early trading. The loss narrowed considerably, however, and the benchmark closed down by a mere 0.2 per cent.

The Hong Kong market closes an hour later in Hong Kong so the reaction to the US move was seen on Wednesday, when the benchmark tumbled by 2.3 per cent – the most in more than a month.

“The news that the US wanted to kick out diplomats from Houston’s Chinese consulate came as a bit of a scare for both the Hong Kong and A-share markets because we haven’t experienced anything like that before, so it caused a bit of panic-selling after 3.30pm [on Wednesday],” said Louis Tse Ming-kwong, managing director of VC Asset Management.

“If you speculate in this kind of market, psychologically you have to be prepared that it’s just like a yo-yo – it swings here and there,” said Tse. “You have to be calm, deliberate before you begin, and execute with rigour. You have to make a decision like that, otherwise you will kiss your money away.”

Select tech stocks rose as investors chased them ahead of the new Hang Seng Tech Index, which Citigroup said would benefit both the sector and the city’s exchange.

Benchmark heavyweight Tencent rose 3.3 per cent to HK$557 for its fourth gain out of the five most recent sessions. Meituan Dianping increased 3.5 per cent to HK$199. However, Alibaba slipped 0.6 per cent to HK$246.60. The trio, plus Xiaomi and Sunny Optical, will be the most heavily weighted stocks in the new tech index.

Sunny Optical advanced 3.5 per cent, while Xiaomi rose 1.9 per cent.

AAC Tech, which makes lenses for smartphones and will also be in the Tech Index, shot up as much as 16 per cent, before ending the day with a 12.9 per cent gain.

The strategic investors have agreed to make a capital increase of 1.15 billion yuan in aggregate to AAC Communication, and will obtain a total of approximately 9.58 per cent of the enlarged equity interest.

Meanwhile, on the mainland, Kweichow Moutai, one of the most popular stocks on the mainland as well as on the Stock Connect, slipped 0.1 per cent to 1,676 yuan.

US-China tensions are unlikely to leave investors’ radar any time soon. Trump is facing an uphill re-election battle, according to both national polls and ones in key battlefield states. His campaign aides say he plans to continue his pressure on China, which is seen as a way to gain voter support.

On Thursday, Hu Xijin, the influential editor-in-chief of The Global Times, warned in a Chinese social media post that Beijing could close the US consulate in Hong Kong as a countermeasure.

“There are at least one thousand and several hundred more staff in the US consulate in Hong Kong. Why does it have so many people there? It's too obvious that the consulate is an intelligence centre,” Hu wrote.

“China actually has many countermeasures. For instance, China could target the US Consulate General Hong Kong and Macau. Even if China doesn't close it, it could instead cut its staff to one or two hundreds,” Hu wrote.

A knowledgeable source told the South China Morning Post that China is moving to close the US consulate in Chengdu over the Houston consulate move.

As for why the Houston consulate may have been targeted, it has been the “epicentre” of efforts by the Chinese military to send students to the US to obtain information that could advance its warfare capabilities, a top US diplomat said on Wednesday in the most detailed explanation so far.

The People’s Liberation Army (PLA) has been “sending students both overtly and otherwise to American universities to study things to advance their own warfare advantages in the economic world and the rest”, said David Stilwell, the top East Asia official at the State Department, in a New York Times interview. “At the epicentre of all these activities facilitated by the [People’s Republic of China] mission is this consulate in Houston”.