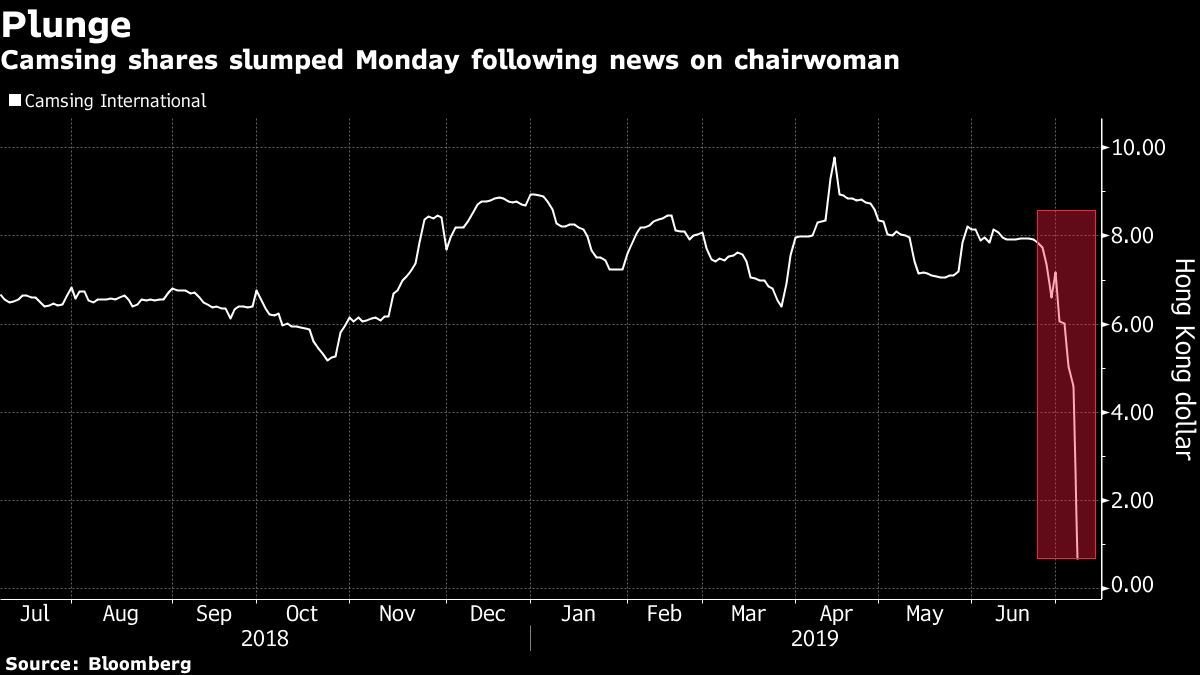 Camsing International Holding Ltd. tumbled a record 80% and trading volume soared to nearly 400 times the three-month average after the company said its chairwoman Lo Ching is in police custody in Shanghai.

In a statement to the stock exchange late Friday, Hong Kong-headquartered Camsing said it became aware on July 5 that Lo was being held in criminal custody by the Yangpu branch of the Shanghai Public Security Bureau. The directors of the company were unaware of the reasons, the statement said, adding that business and board operations haven’t been adversely affected. Camsing didn’t immediately respond when reached for comment Monday.

Lo is also chairwoman of Jiangsu Boxin Investing & Holdings Co., which slumped by the 10% daily limit in the morning and then rose to close up by the 10% limit in Shanghai, where it was one of the 40 most-traded stocks, despite having a market value of just 3 billion yuan ($435 million).

In a statement to the Shanghai stock exchange after Friday’s close, Jiangsu Boxin said Lo was taken into custody on June 20, while chief financial officer Jiang Shaoyang was detained on June 25. It also said its business was operating as usual and that steps would be taken to enhance corporate governance.

A court in Jiangsu province has frozen Lo’s holdings in Jiangsu Boxin -- about 65 million shares, or a 28.4% stake -- for three years from July 1, the company said in a separate statement to the Shanghai Stock exchange last week.

Camsing fell as much as 90% earlier in the day. In its report for the half-year ended December, the company said it was shifting its business from electronic manufacturing to intellectual property. Its total revenue for the period totaled around HK$2.32 billion ($300 million).

--With assistance from Ludi Wang and Amanda Wang.

To contact the reporter on this story: Jeanny Yu in Hong Kong at jyu107@bloomberg.net

To contact the editors responsible for this story: Sofia Horta e Costa at shortaecosta@bloomberg.net, Will Davies, Magdalene Fung