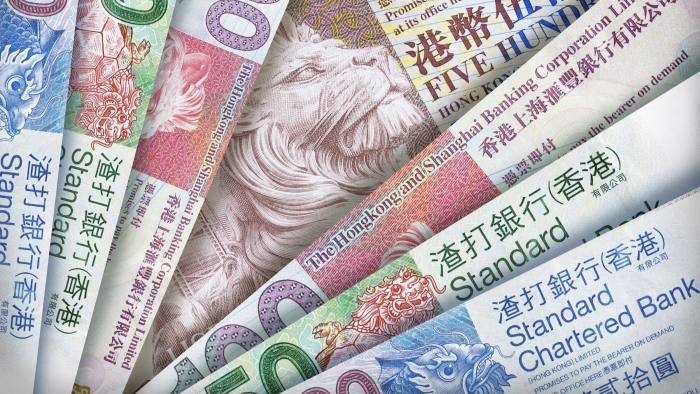 Hong Kong steps up currency interventions to most since 2009

Hong Kong’s central bank has been selling the territory’s dollar this year after relatively high interest rates and share offerings strengthened the currency to the edge of its designated range against the greenback.

The Hong Kong Monetary Authority has intervened 40 times to keep its currency’s peg against the US dollar in check in 2020, official data show — the most active spate of interventions since the financial crisis of 2008 and 2009. In total, it has sold HK$132bn to keep the exchange rate steady.

Analysts said the US Federal Reserve’s move in March to cut rates close to zero in response to the coronavirus pandemic had pushed US dollar interest rates below those in Hong Kong, prompting investors seeking better returns to shift into Hong Kong dollar assets.

Under a policy that has endured since 1983, the HKMA buys and sells dollars to keep the territory’s currency within a narrow band of HK$7.75 to HK$7.85 to the greenback. That can mean heavy interventions to strengthen the Hong Kong dollar, as during the 2008 and 2009 crisis.

Now, though, with the US dollar weakening and inflows into Hong Kong equities from international and Chinese investors rising, the local currency has been strengthening in recent months.

“If you don’t buy the Hong Kong dollar you can’t buy Hong Kong stocks,” said Iris Pang, chief greater China economist at ING. Ms Pang said that without the constant intervention by the HKMA, Hong Kong’s dollar would have matched currency gains for other Asian markets that have seen inflows this year, including China and Taiwan. 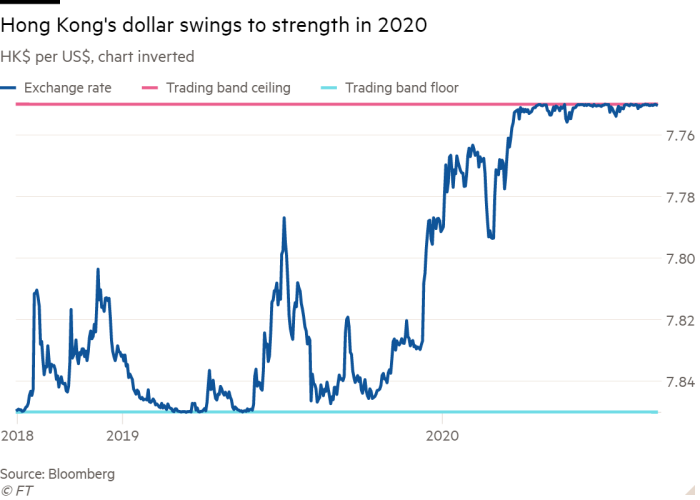 Demand could climb further as a bumper season for initial public offerings gets under way in Hong Kong. “We are waiting for the mega IPOs like Ant Group,” said Ms Pang referring to the payments company that filed last month for a dual listing in Hong Kong and Shanghai.

People familiar with Ant’s plans say the Hong Kong leg could raise as much as $20bn. Ms Pang said such a listing would lead to “massive capital inflows”, adding that some funds may already be flowing into the city in preparation.

The recent interventions from the HKMA are a reversal from previous episodes, in which it was forced to defend the weaker limit of HK$7.85 as excess cash in Hong Kong’s banking system kept real interest rates low and the value of its currency depressed.

A break in the peg would be a disruptive event for global markets, analysts and investors say. Most believe it is extremely unlikely to happen. But some, including hedge fund manager Kyle Bass, have argued that capital flight could cause the currency peg to collapse.

“Hong Kong’s peg won’t break easily”, said Kevin Lai, an economist at Daiwa Capital Markets. But he warned that US sanctions on Hong Kong officials in response to a sweeping national security law imposed by Beijing could put the financial institutions that deal with them at risk of being sanctioned themselves.

That could disrupt banks’ access to US dollar financing and render them unable to cover dollar loan obligations. “If sanctions affect [Hong Kong] banks, even high interest rates may not be enough to stabilise outflows,” Mr Lai said.