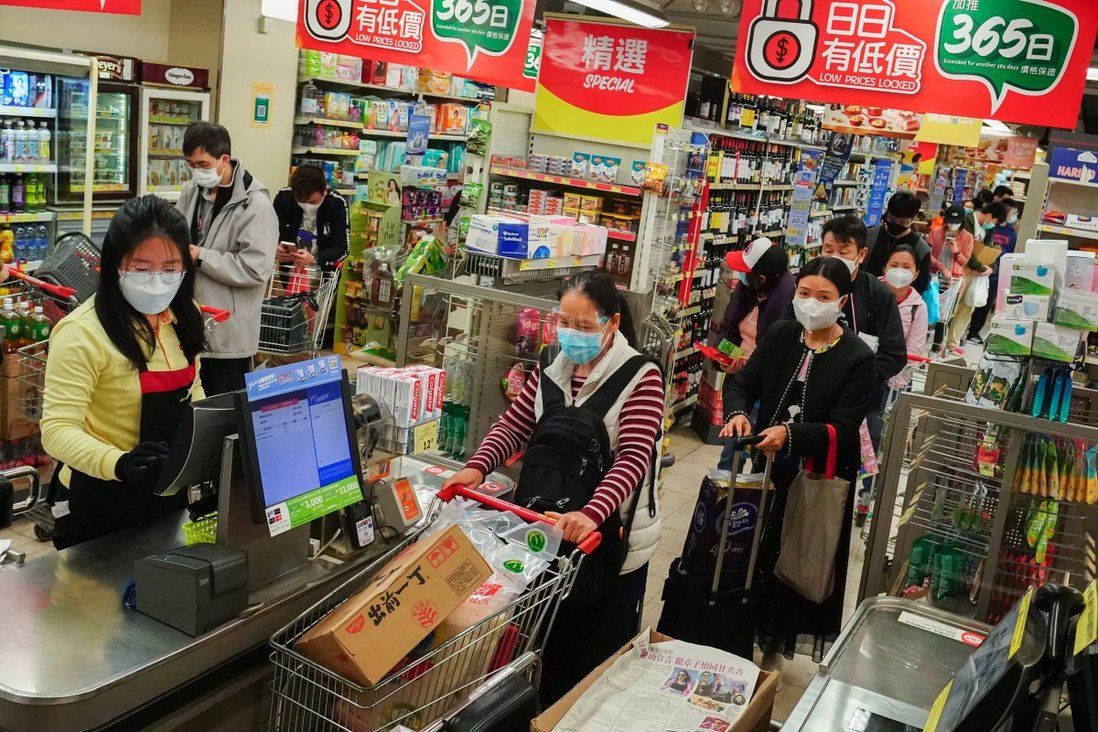 Customers formed at supermarkets across the city and others queued up online amid fears of a lockdown during proposed universal testing in March.

Long lines of customers formed at supermarkets across Hong Kong on Monday to strip shelves of daily necessities and groceries, while thousands flocked to online shopping portals, panicked by the possibility of a large-scale lockdown to enable universal testing for Covid-19.

The shock waves spread after Secretary for Food and Health Sophia Chan Siu-chee told a radio programme on Monday morning the government would not rule out the possibility of such a lockdown, citing the need to “reduce the flow of people to a certain extent”.

That was in contrast to Chief Executive Carrie Lam Cheng Yuet-ngor’s statement last Tuesday that the proposed citywide testing would not require a lockdown when it was conducted in March. 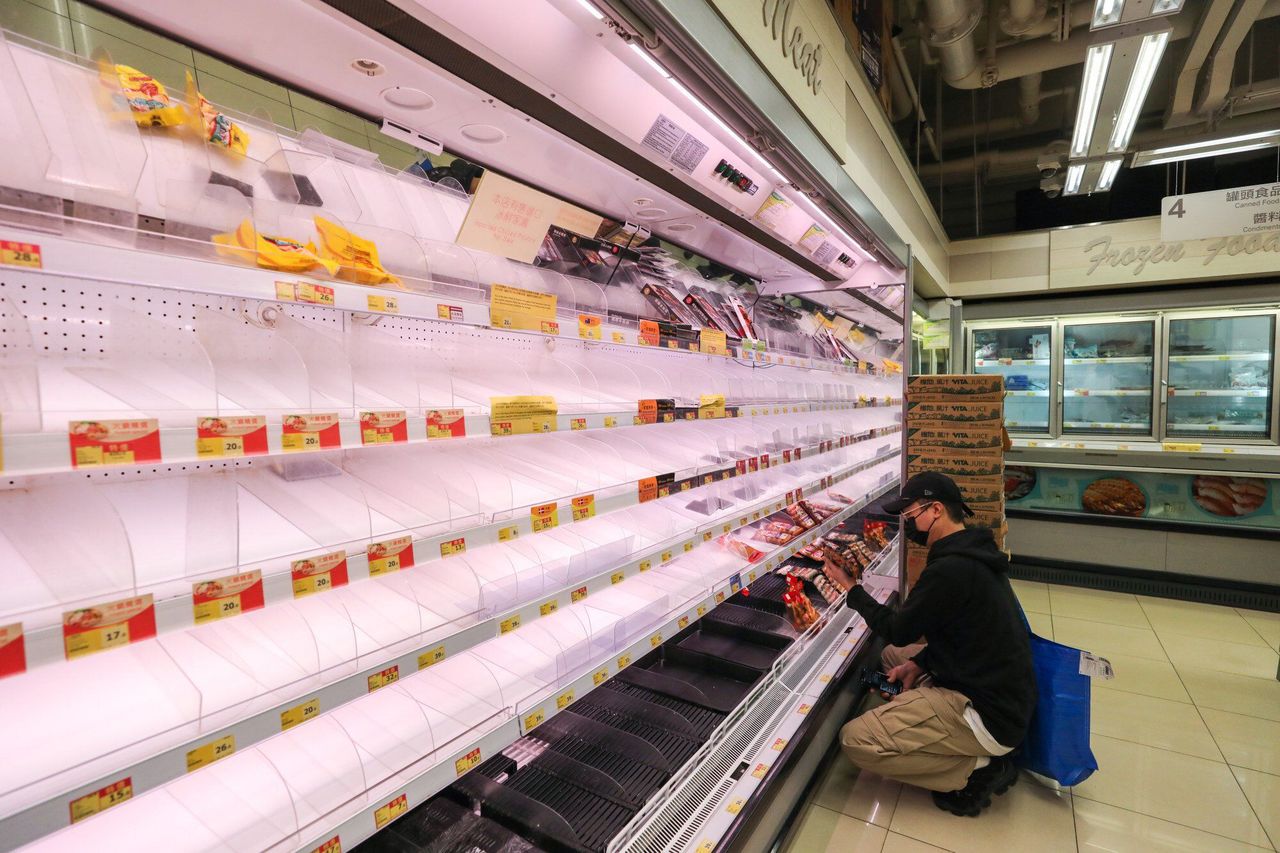 Shelves almost empty of fresh food at a supermarket in Jordan.

Anxious shoppers wiped the shelves clean of fresh meat, vegetables and medication as the city grapples with its fifth wave of the coronavirus. Officials confirmed a record 34,466 Covid-19 cases on Monday.

A Wellcome outlet in Causeway Bay was a scene of long queues, empty shelves and shoppers with baskets full of fresh produce when the Post visited on Monday afternoon. Goods such as fresh pork, bread, eggs and vegetables had sold out, while items like canned food, frozen dumplings and fruits were in short supply.

Only a few shoppers had carts full of essentials such as oil and rice, as most people bought groceries in small quantities. Rice, noodles and toilet paper – items that flew off the shelves in previous rounds of panic buying – were in stock.

Ivy Chung, a housewife in her 50s who stays in Sha Tin, was one of the shoppers in line. She had come to Causeway Bay for a bank errand and heard rumours of a potential lockdown. She stocked up on fresh fruits and vegetables, and planned to order bulkier items such as rice from e-commerce sites.

“Everything is sold out in the supermarkets in Sha Tin, so this outlet is relatively well stocked,” she said. “I’m not too worried about a lockdown, but I just want to ensure I have enough fresh food for the next few days.”

A retiree surnamed Wong was also buying fresh groceries and instant noodles at a ParknShop outlet in Wan Chai. Because of the surge in cases, the 70-year-old leaves his home for grocery runs only twice a week. He said he could not find any fresh meat and had to switch to buying the frozen type.

“The market is crowded, but I don’t have a choice. I have to eat, right?” said Wong, who was double-masked and wore a pair of plastic gloves. “Also, I couldn’t find any Panadol. I went to so many pharmacies and they are all sold out.”

As shoppers swamped its website, ParknShop turned to giving out virtual queue numbers to enter the platform. As of Monday afternoon, more than 7,000 shoppers were in the virtual queue, with an estimated waiting time of 40 minutes. According to a notice on the website, all delivery slots for the next 12 days have been taken up. 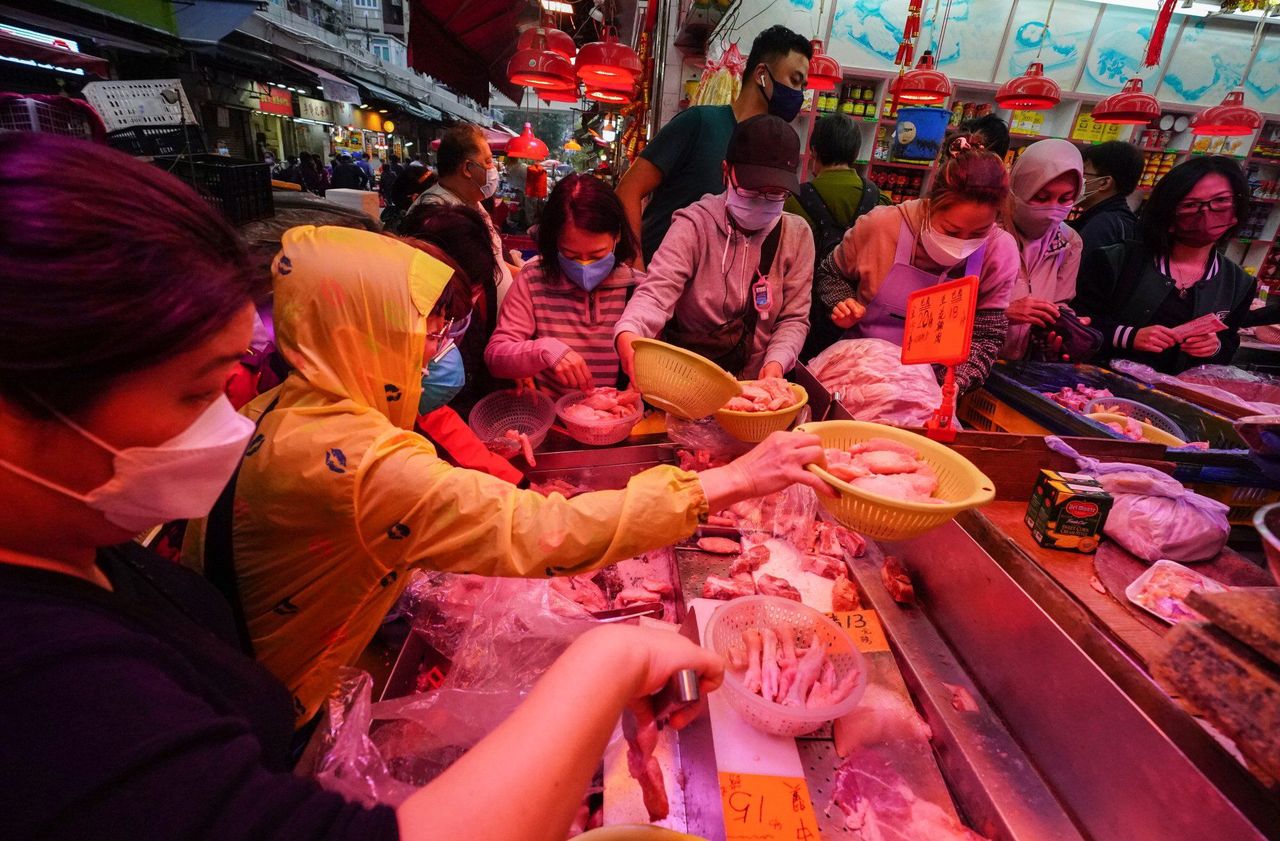 People buying fresh meat from a market in Mong Kok.

Several chemists, supermarkets and convenience stores visited by the Post on Monday morning had sold out of Panadol. An employee at a Mannings outlet in Wan Chai said Panadol had been out of stock for more than a week, while pharmacy owners were unable to tell when more supplies would be coming in.

The drug was also out of stock, according to the online stores for Watson’s and Mannings. Besides paracetamol, Coltalin cold tablets and rubbing alcohol were among the items in high demand at pharmacies, with a constant stream of shoppers entering chemists to buy disinfecting products.

Hong Kong also faced a shortage of fresh meat because of the closure of Sheung Shui and Tsuen Wan slaughterhouses after the Food and Environmental Hygiene Department found 183 positive Covid-19 cases in the Sheung Shui abattoir last Friday.

The Tsuen Wan slaughterhouse resumed limited service on Monday. Only one of three fresh meat stalls was open in the Bowrington Road market in the morning, with a long line of shoppers trying to get their hands on fresh pork.

A butcher surnamed Lai at the Wan Chai market said his stall has not received any fresh pork since Friday. He was still open for business, selling leftover portions of minced pork, and was relying on selling soy products such as tofu to prop up his business. Other fresh meat stalls had their shutters closed for the past few days, he said. 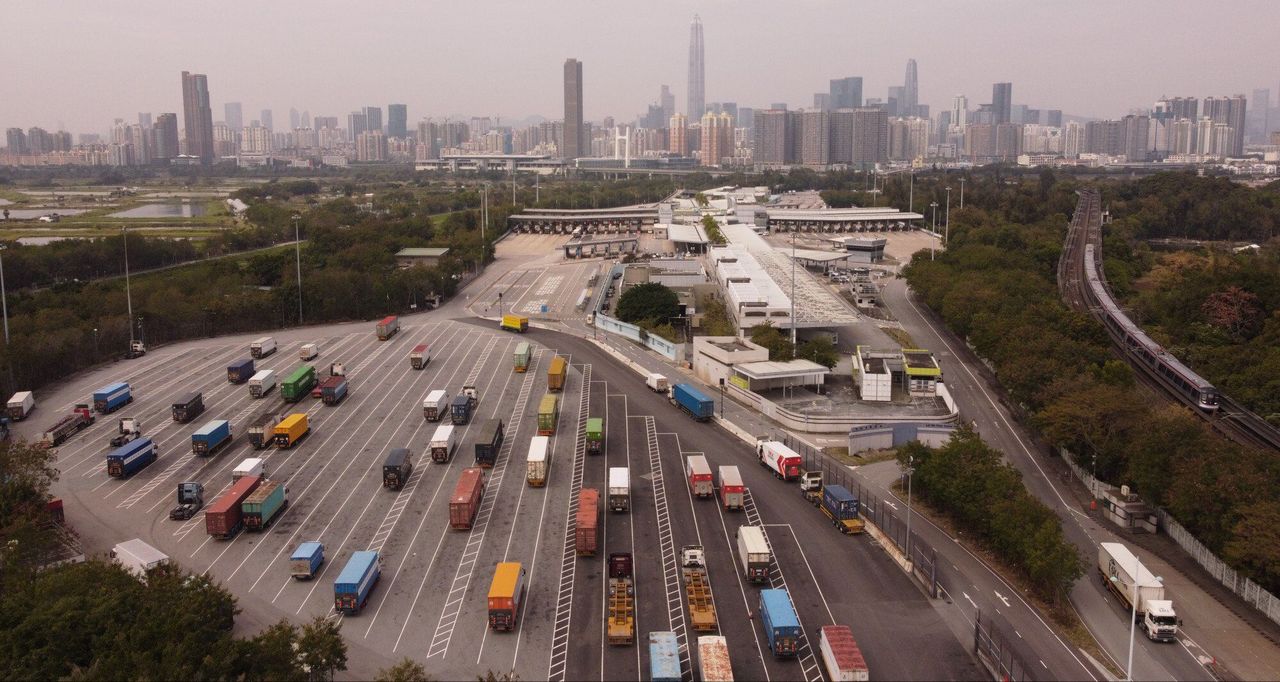 Lorries and trucks queue up at the Lok Ma Chau checkpoint.

Meanwhile, Shenzhen authorities announced that cross-border drivers who tested positive for Covid-19 or were identified as close contacts of patients would not be allowed there for 21 days starting on Tuesday.

“This will certainly affect the supply of goods to Hong Kong. About 70 per cent of truck drivers already cannot cross the border due to current arrangements, so the new measures will definitely have an impact,” Chiang said.

“We are already looking at alternatives, such as transporting fresh goods by sea, but this will cause a one-day delay compared with importing fresh food by land.”

There are about 8,000 local cross-border drivers in total.