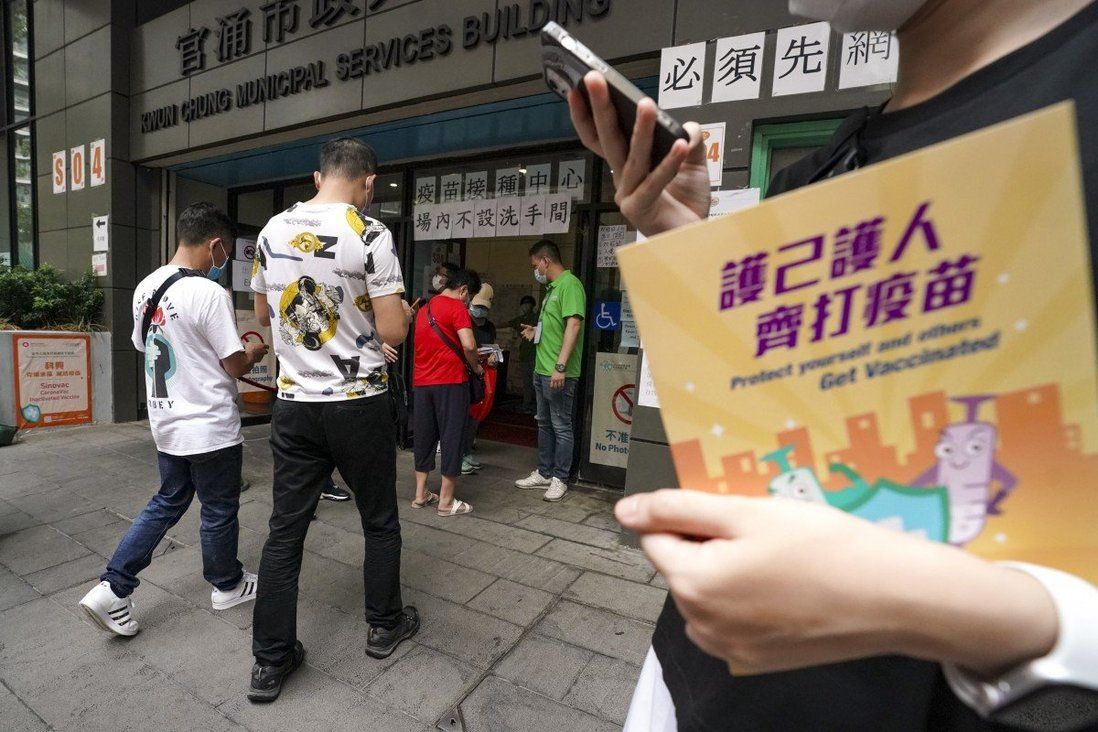 A source says the government plans to tighten restrictions on diners by requiring them to be vaccinated with at least one dose of a vaccine. Exemptions will be available for those aged 12 or below or people who obtain medical proof they are not fit for vaccination.
Hong Kong authorities will require two-thirds of diners in a restaurant to be inoculated against Covid-19 from January at the earliest in a bid to boost vaccinations amid concerns over the Omicron coronavirus variant, the Post has learned.

A source familiar with the arrangement on Monday said the government planned to tighten restrictions on diners by requiring them to have been inoculated with at least one dose of a vaccine. Staff must have received two doses.

This effectively means the measure – which currently applies to 15 per cent of the city’s restaurants that operate under the so-called Type D mode, where a maximum of 12 diners per table is allowed – will be extended to all 16,000 licensed eateries and bars in Hong Kong.

“There are exemptions for those aged 12 or below or those who obtain medical proof that they are not fit for vaccination,” the source said.

The government and medical experts regard vaccination as being necessary to combat Omicron, which is spreading around the world and is possibly more contagious than the highly infectious Delta variant, although its symptoms so far appear to be mild.

While it remains to be seen how receptive diners will be to the arrangement and how difficult it will be to enforce, similar policies have been adopted elsewhere.

In Germany, for example, a rule where only vaccinated people or those who have recovered from Covid-19 are allowed to enter restaurants is gradually being imposed nationwide. In France, a “health pass”, which proves a person is either fully vaccinated or recently tested negative for the virus, is required in different venues including restaurants and bars.

With use of the official “Leave Home Safe” Covid-19 risk-exposure app becoming mandatory in various venues including eateries and bars from Thursday, the government announced that Type B restaurants, which can seat up to four diners per table and are not required to have vaccinated staff, will be allowed to extend their business hours from 10pm to 10.59pm. Most restaurants operate under Type B rules.

It said exemptions would be granted to those aged below 15 or above 65, the disabled, underprivileged groups such as the homeless and others unable to use smartphones.

In a related development, the Post has learned the Hong Kong Jockey Club and four telecoms firms will donate thousands of handsets following a government call last week for charities to help those without smartphones so they could download the app.

The government, meanwhile, also said it would move the Maldives, Senegal and Tunisia to its list of Group A high-risk countries for Covid-19 from Thursday following the discovery of Omicron cases. The move means non-residents will be barred from entering while city dwellers must undergo a 21-day quarantine upon arrival.

Officials also returned the Cook Islands and Luxembourg to the Group B medium-risk list – under which fully vaccinated arrivals must undergo 14 days of quarantine – after Omicron cases in both countries turned out to be false.

Some 4.79 million people, or 71.1 per cent of the city’s eligible population, have received at least one dose of a Covid-19 vaccine. But the one-dose vaccination rate among the elderly remains low, at just 46.4 per cent for people in their 70s, and 18.9 per cent for those aged 80 or older.

Union Hospital said it was fully booked for shots in the coming two weeks, with “under 100 people” signing up. The earliest available slot was on December 21. The hospital said most people went to receive their third dose.

Dr Samuel Kwok, medical director of Virtus Medical Group, said bookings on the first day were “not overwhelming” across its three service locations. “We expect it to increase gradually based on the demand uptick,” he said.

Leading infectious disease expert Dr Ho Pak-leung flagged a new study in South Africa that found Omicron was more likely to cause reinfection than other variants.

The study estimated Omicron was 2.39 times more likely to cause reinfection compared with the virus during the first Covid-19 wave in South Africa last year. The figure for Delta was 0.75, suggesting a low risk.

“Population-level evidence suggests the Omicron variant is associated with substantial ability to evade immunity from prior infection,” the researchers said.

“This finding has important implications for public health planning, particularly in countries like South Africa with high rates of immunity from prior infection.”

But the academics said the study left open the question of whether Omicron would also be able to evade vaccine-generated immunity.

Respiratory medicine specialist Dr Leung Chi-chiu said the findings were not surprising and corresponded with results that showed the variant had 32 mutations in the spike protein.

“It doesn’t change much for policymaking in a place like Hong Kong where there have been so few past infections. Vaccination and boosters are still needed for all to end the pandemic, as no evidence has emerged so far Omicron will undercut vaccine efficacy in preventing hospitalisation and serious illness,” he said.

But he reiterated vaccines remained useful in preventing serious symptoms, given that all four Omicron cases in Hong Kong were mild, and three of the patients had been jabbed.

Hui said Hong Kong should seize the opportunity when its zero-Covid approach was still being maintained and vaccinate as many people as possible.

“For our high-risk populations, like the elderly and immunocompromised people ... we need to vaccinate those people with two doses first, and a booster too if time allows,” he said.

In its latest round of regular updates, the Department of Health said it had received 6,437 reports of adverse reactions to Covid-19 vaccines by the end of last month. Of 49 deaths, 35 were found to have no relation to the vaccine, while preliminary findings on the other 14 concluded they were also unrelated.
#Coronavirus  #Vaccines  #BioNTech  #COVID-19  #vaccine  #Covid
Add Comment