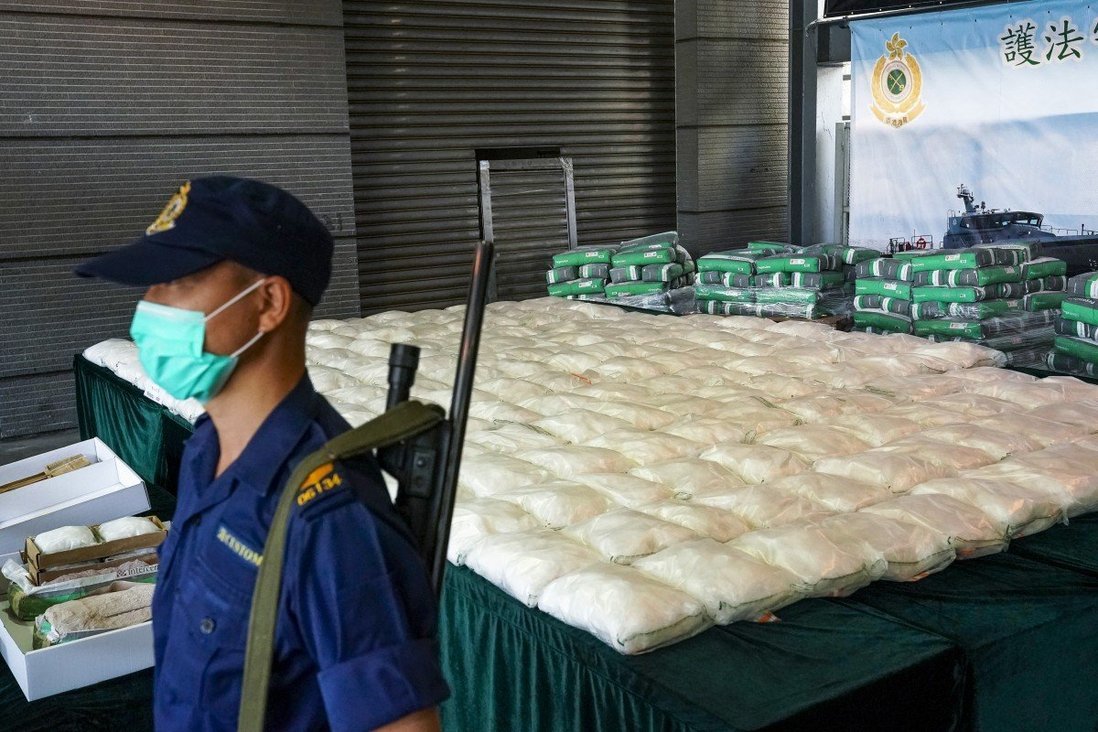 Hong Kong customs enforcers seized more than 3½ tonnes of illegal drugs worth almost HK$2.2 billion (US$284 million) in 2020, the largest amount in a single year since records began nearly two decades ago, new figures obtained by the Post reveal.

With the Covid-19 pandemic crippling global travel and shutting borders, international trafficking syndicates switched from using human couriers to transporting narcotics by air cargo instead. More than 2.5 tonnes of drugs – nearly three-quarters of last year’s total – were found at the airport cargo terminal.

The biggest success was the seizure of nearly 950kg of cocaine over the course of 2020, the largest amount confiscated in a single year since records began in 2002, and far more than the 627kg seized in 2019. Most of the cocaine seized originated from South America.

Last March, customs officers found 217kg of cocaine, worth HK$246 million, hidden in an aircraft engine being transported from Ecuador. 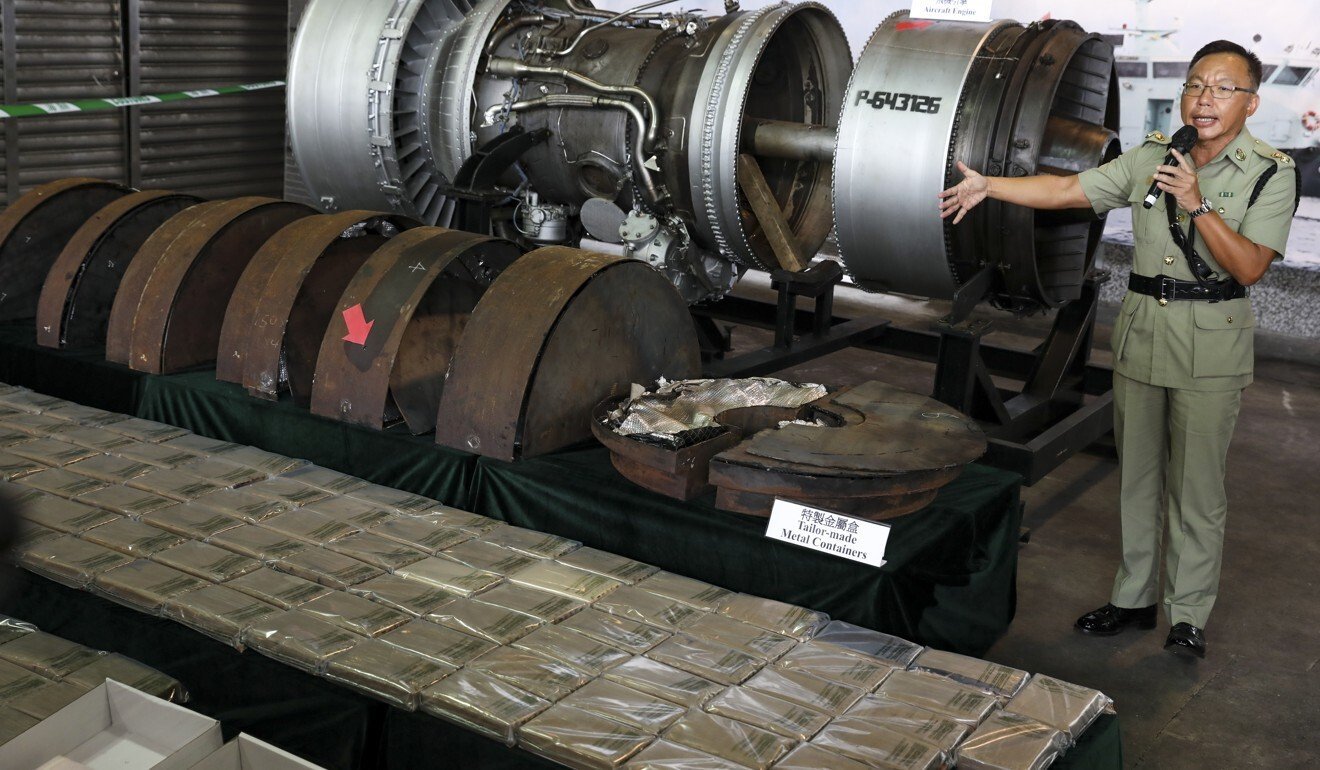 An official discusses the seizure of some HK$246 million worth of cocaine found hidden in an aircraft engine shipped from South America last year.

The Customs and Excise Department confirmed the record haul, and said most of the intercepted drugs were not meant for Hong Kong, but were on their way to neighbouring areas and countries.

A department spokesman stressed: “Hong Kong is definitely not a dangerous transshipment hub. Transshipment seizures reflect nothing but the department’s effective enforcement action.

A law enforcement source said the huge haul reflected the department’s adaptation after observing that international syndicates had changed tactics during the pandemic. Officers noticed that as borders closed, syndicates were unable to use human couriers as they had in the first three months of the year.

“In response to the trend, customs deployed extra manpower and resources to the airport’s cargo terminal and increased inspections of parcels from different parts of the world,” the source said.

The large quantities intercepted also showed that syndicates were able to ship bigger volumes as cargo.

Some of the drugs seized were meant for the Hong Kong black market.

As syndicates had difficulty smuggling cocaine into Hong Kong, the street price of crack cocaine is believed to have soared from HK$1,400 a gram last January to as much as HK$2,400 a gram last month.

“The surge in the price indicates that there is high demand in the black market but not enough supply,” the source said.

Crystal methamphetamine, also known as Ice, came second in the amount of drugs seized last year, with officers confiscating 817kg, a 225 per cent rise from 251kg the previous year.

In October, a record haul of 501kg of the drug, with a street value of nearly HK$300 million, was found concealed in a shipping container on its way from Mexico to Australia. The rest of the Ice seized last year was found at the airport. 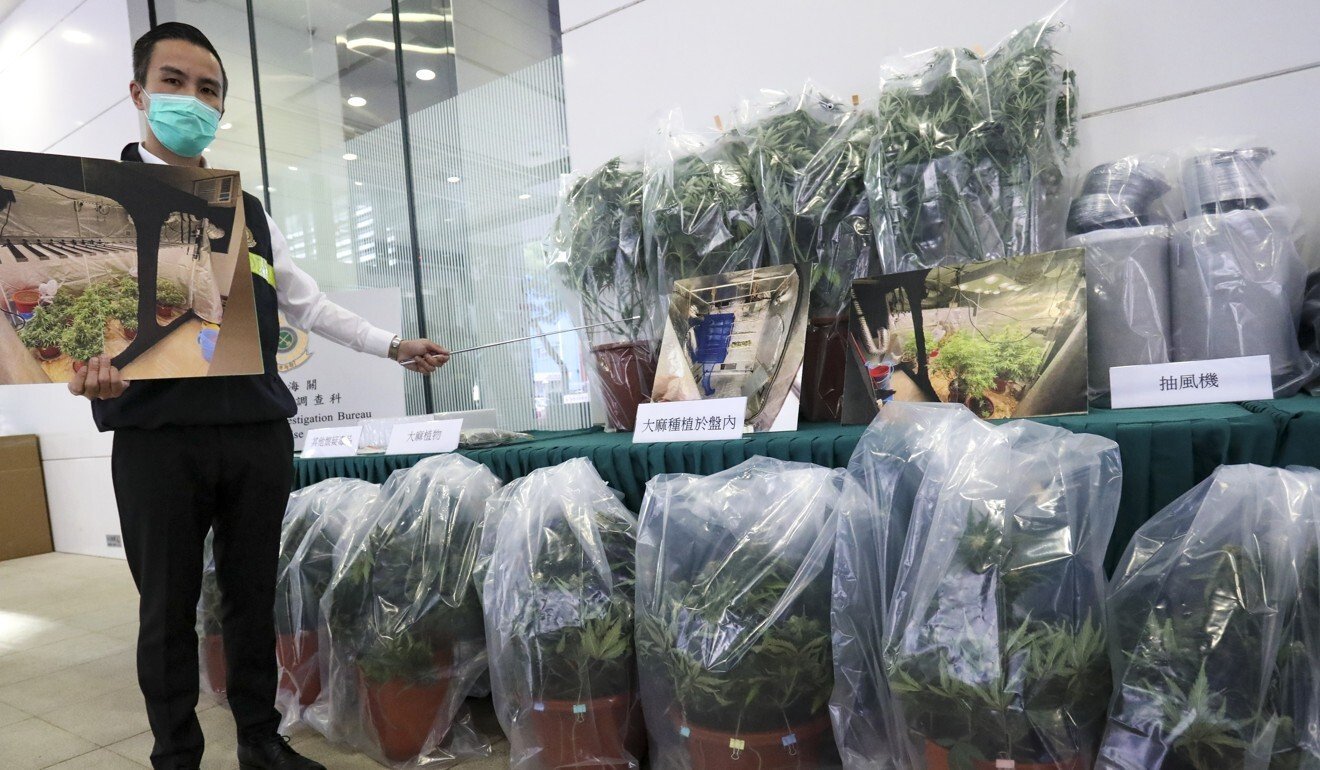 After a massive crackdown on crystal meth factories in mainland China in 2017 and 2018, drug syndicates switched to bringing it in mainly from Mexico and Europe.

Officers also seized 403kg of cannabis last year, up from 263kg the previous year. Most of it came from North America.

To avoid detection, syndicates have taken to hiding drugs in items such as toys, photo frames and books.

The department spokesman said liquid cocaine was commonly disguised as wine, or soaked into clothes, and powdered cocaine was frequently packed as health food, chocolate and tea leaves.

Another source said that with no end in sight to the pandemic, international syndicates were likely to continue trying to smuggle drugs into Hong Kong by air cargo.

To increase their chances of success, syndicates had also tried smuggling large amounts of drugs into Hong Kong in small batches, he said.

The spokesman said the department would continue to make “swift adjustments on enforcement strategies and resources deployment” to deal with trafficking activities.