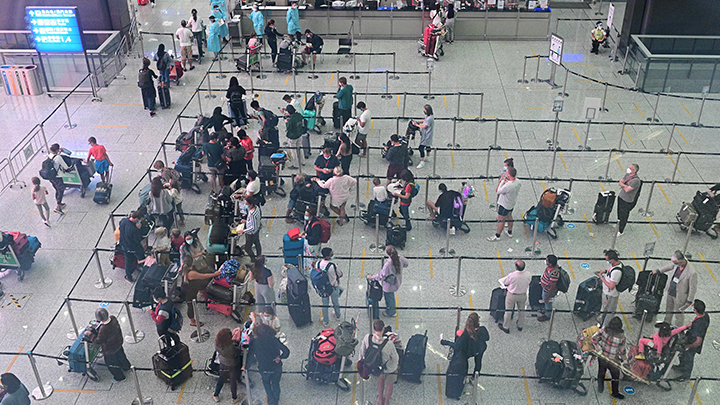 Hong Kong reported 5,823 new Covid-19 cases and 120 related deaths on Friday, while health authorities warned of a new XE mutation of the Omicron variant.
Among the new cases, 2,743 were confirmed through PCR tests, including three imported cases. The other 3,080 cases were positive rapid antigen test results reported by citizens.

Chuang Shuk-kwan from the Centre for Health Protection said she read reports by the World Health Organization (WHO) on a new compound virus and noted that the University of Hong Kong found that in early February, two travelers carried a new XE mutation of the Omicron variant.

Still, she continued that the new mutation was found at the airport, and there is no sign that the mutation has been brought into local communities.

She also added that at least two to three million citizens have yet to be infected by the coronavirus and warned of a rebound in the infection numbers if citizens are to increase their social activities.

Chuang said that no elderly home or care centers reported an infection outbreak in the past 24 hours.

She pointed out that the overall infection tally of the fifth wave of the pandemic in Hong Kong has now exceeded 1.15 million.

The death tally of the fifth wave now stands at 7,732.

The deceased patients included 49 men and 47 women aged between 38 and 103. The 38-year-old patient was a man with records of mental disorders. He tested positive on March 17 and was rushed to the emergency room of Princess Margret Hospital after hurting himself.

His condition deteriorated, and he was transferred to the intensive care unit. He later developed pneumonia and needed extracorporeal membrane oxygenation. He eventually passed away on Thursday.

Among them, 52 were residents of elderly homes, 59 had no vaccination record, and 92 were elderly aged above 65.

Ho also reported 20 deaths between March 19 and 30 due to lagged results, while forensics reported deaths of four people aged between 61 and 94. The four all suffered from chronic diseases and passed away between March 7 and 20.

Ho continued that 10,298 patients are now staying in public hospitals and treatment facilities. In the past 24 hours, 1,473 recovered patients were discharged.
#Coronavirus  #COVID-19  #Covid
Add Comment