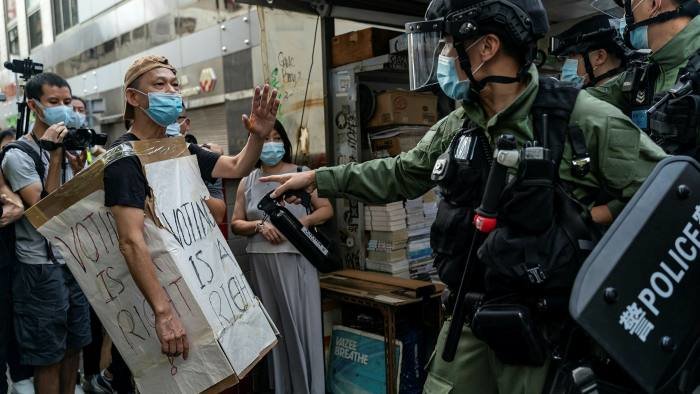 The teenage student at Heung To Middle School displayed the phrase “Free Hong Kong, Revolution of Our Times” in an online profile picture and was suspended for a week, according to a Facebook post by a student group. The school said the boy would be expelled if he was found to have participated in so-called social movements again, the post added.

Hong Kong’s education bureau said the term was not an “ordinary political slogan” but carried subversive and seditious meaning under the National Security Law.

The decision highlights how authorities are imposing stricter controls over the territory’s education system, which the Chinese government blamed for helping spur last year’s pro-democracy protests. Beijing imposed the national security law on the semi-autonomous territory in June, with critics arguing it has disproportionately limited individuals’ liberty and right to free expression.

Schools have come under particular scrutiny. A teacher at the Heung To Middle School alleged her contract was not renewed because of her political views and for not stopping a student from playing Glory to Hong Kong, the unofficial anthem of the protest movement, in a music exam, according to local media.

Publishers have also been asked to review textbooks that include content critical of the Chinese government.

Wong Kwan-Yu, president of pro-establishment Hong Kong Federation of Education Workers, a teacher’s union, said the school was probably “making an example” of the student.

But Ip Kin-yuen, a member of Hong Kong’s Legislative Council, the city’s de facto parliament, who represents the education sector, said the school’s decision was harsh. “The education bureau has decided to strangle a student’s thoughts for greater control,” he said.

Teachers have said the recent incidents have created a difficult environment in schools. Leo, a teacher who refused to give his full name for fear of repercussions, said he was worried and confused about “what could and couldn’t be said” in classes.

“I have to stop telling the reality I know to avoid violating some rules . . . The education system has become insincere, which creates distrust between teachers and students,” he said.

The Chinese government has long seen Hong Kong’s education system as a vulnerability in its ability to exercise its authority. In recent months, professors involved in social movements have been dismissed, authorities have warned teachers and students from joining in political activities and requested the scrapping of a controversial history examination question about the Japanese invasion of China during the second world war.
Add Comment