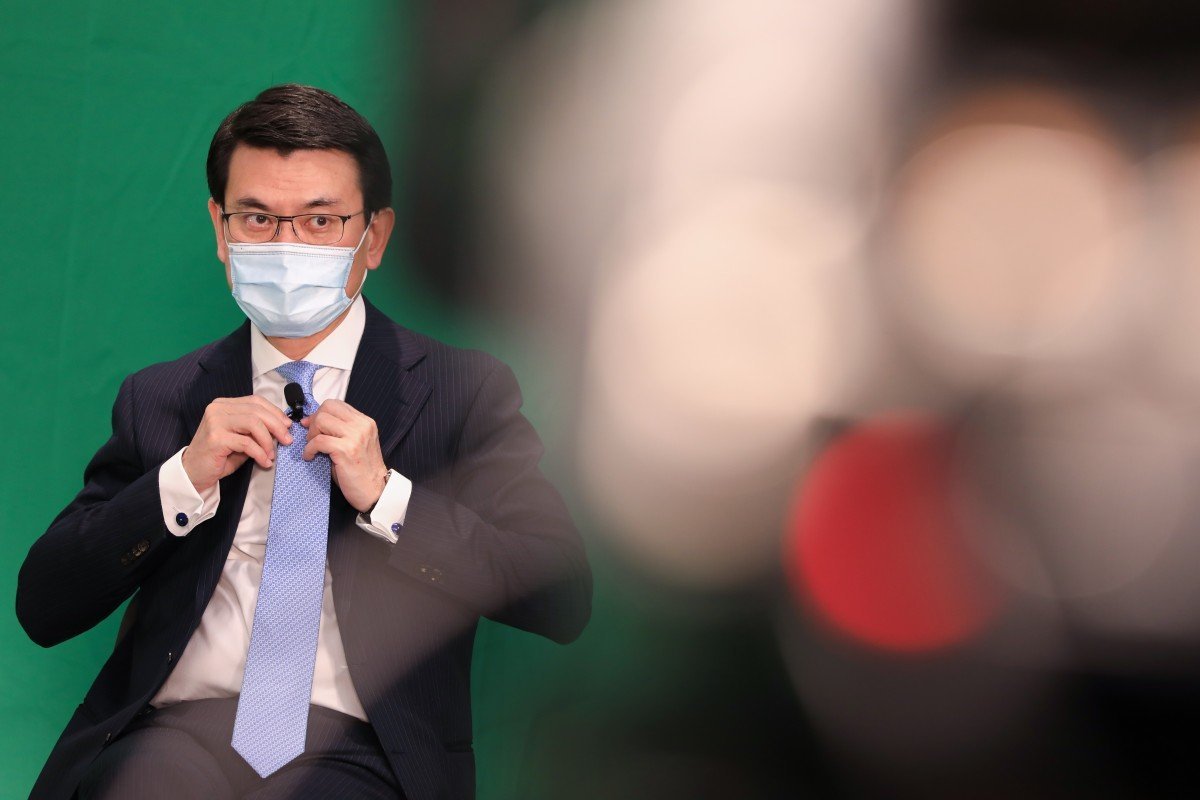 Secretary for Commerce and Economic Development Edward Yau says ‘the second quarter will not be any better than the first quarter’. Yau was speaking at China Conference hosted by the Post

Hong Kong’s commerce minister has warned the city’s coronavirus-ravaged economy could continue to suffer in the second quarter of the year.

Speaking exclusively to the South China Morning Post on Thursday at the China Conference, which the Post is hosting, Secretary for Commerce and Economic Development Edward Yau Tang-wah said he was not optimistic about the city’s gross domestic product.

“The second quarter will not be any better than the first quarter because the trend has been set and we’re still suffering … so I don’t see much light at this point,” he said.

Yau made his grim prediction after the city’s battered economy suffered its worst decline on record, shrinking 8.9 per cent in a preliminary estimate year on year in the first quarter.

It was the deepest drop in a single quarter since records began in 1974, and worse than the previous low point of 8.3 per cent in the third quarter of 1998, during the Asian financial crisis.

The government is due to release the final first-quarter figures on Friday.

Last month, Financial Secretary Paul Chan Mo-po warned that Hong Kong was heading for its worst recession ever, as he downgraded his full-year GDP forecast to a contraction of anywhere between 4 and 7 per cent. In February, his estimate had ranged from a 1.5 per cent contraction to 0.5 per cent growth.

As for the latter half of the year, Yau said he believed there would be tough times ahead, and that the city’s economic prospects would depend on how the global community weathered the Covid-19 storm, and if businesses could return to normal.

“It depends on how much the business routine could be brought back, and how the global fight against Covid-19 is going on … how much people would do to give the sense of comfort and certainty for the business sector to resume. That would be a very difficult path,” he said.

“Hong Kong can’t have any distinctive rebound without seeing the world coming back to normalcy.”

Yau pointed out that the city’s economy had been hit by the triple whammy of the US-China trade war, social unrest and the ongoing impact of the coronavirus.

He also warned that anti-government protests would hamper any economic recovery if they returned.

“That would bring a lot of negative sentiment to the business sector. But it is entirely in the hands of Hong Kong people,” he said. “Nobody would want to see violence and conflict. Hong Kong people see the need for solidarity in the fight against Covid-19. I hope we can bring back this Hong Kong spirit.”

The city has been at a virtual standstill over the past few months, with border checkpoints, schools, entertainment venues and sports facilities all closed.

The city’s key growth engines – exports, retail and investments – have been left in limbo. Exports slumped 9.7 per cent in the first quarter year on year because of serious disruption in regional supply chains and related trading activities.

The government has already earmarked HK$290 billion (US$37 billion) in relief measures via an anti-epidemic fund and budget measures to help the city during the crisis, including offering wage subsidies capped at HK$9,000 for each worker, to save jobs.
Yau said the government hoped the relief measures would bring a cushioning effect of about 5 to 6 per cent to the economic recession, close to 10 per cent of the city’s GDP. He said the move would help 3 million employees through subsidies to about 270,000 companies.

However, he said Hong Kong enterprises had to adopt a new way of doing business if they wanted to survive the challenges of Covid-19, noting that experts had said the world would have to live with the coronavirus for a while.

The commerce minister also said the government would find a suitable time to get Hong Kong back to work. “We are subtly doing some work such as [with] virtual connections. We are preparing for attractions like air tickets and discounts,” he said.
“[We’ll] pitch Hong Kong as the most welcoming, most business-facilitating city … Hong Kong needs the world and I hope the world would also see Hong Kong as able to contribute our part as a welcoming city,” he said.

On the trade war, Yau said there would be no winners, but only losers, pointing out that mutual trade and investments were down significantly for both the United States and China.

“It is hurting both economies … Hong Kong of course suffers from the collateral damage from the US-China trade war,” he said. “As a proven case, nobody benefits from this trade war.”