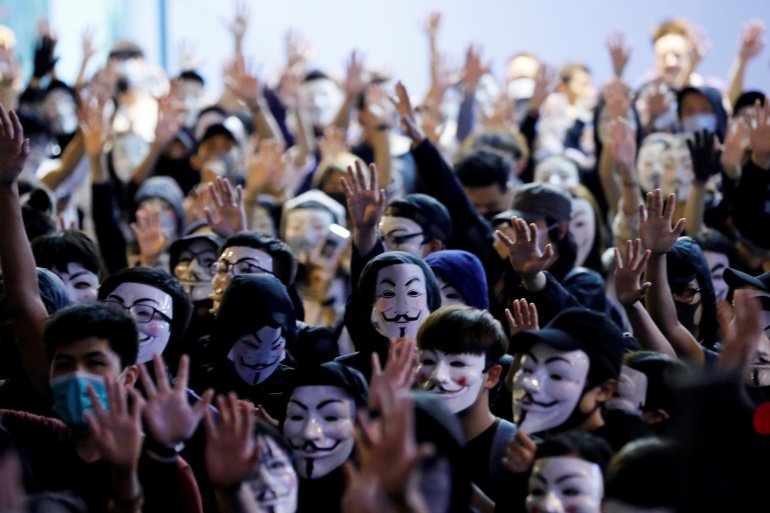 The ruling on Monday is a blow for democracy supporters who had been hoping the Court of Final Appeal would side with a lower court and overturn the order.

It also confirms that Hong Kong’s chief executive – a pro-Beijing appointee – has the power to enact any law in a time of public emergency without needing the approval of the city’s partially elected legislature.

Hong Kong was convulsed by seven months of huge and sometimes violent pro-democracy protests against China’s increasing influence last year. During those demonstrations, many wore masks to hide their identities from authorities and to protect themselves from tear gas.

The protest movement has since been quashed by mass arrests, a coronavirus-related ban on public gatherings and Beijing’s enactment of a new national security law in June.

Carrie Lam, the chief executive, banned anyone covering their face at public rallies in October last year. She invoked the Emergency Regulations Ordinance, a British colonial law from 1922, to issue the order.

Opposition legislators challenged both the use of that emergency law and the ban on wearing masks at permitted rallies. They argued the move breached Hong Kong’s mini-constitution, the Basic Law.

A lower court had agreed with those bringing the challenge and expressed concerns about the emergency law and the proportionality of the mask ban.

But the top court unanimously backed the government on Monday.

“It is clearly proportionate for the Prohibition on Face Covering Regulation to seek to prohibit the wearing of facial coverings – used to hide the identity of lawbreakers and having an emboldening effect leading to degeneration of peaceful protests into violence – whether at an unauthorised assembly, a public meeting or a public procession,” the ruling said.

“The situation on the streets and in other public places in Hong Kong had become dire. Members of the public were fearful of going out to certain places and significant inconvenience was caused to the public at large by the blockage of roads and closure of public transport facilities,” it continued.

“The interests of Hong Kong as a whole should be taken into account since the rule of law itself was being undermined by the actions of masked lawbreakers who, with their identities concealed, were seemingly free to act with impunity.”

The practical consequences of the ruling were unclear, given that the government earlier this year made masks compulsory in public areas to combat the coronavirus pandemic.

Antony Dapiran, a Hong Kong lawyer who has written books about the city’s protest movement, said the judges’ conclusions could prove controversial.

“Most striking is the extent to which the Court of Final Appeal judgment privileges one narrative – of ‘violence and lawlessness’ – over any other, and without the broader context in which those incidents occurred, in reaching their conclusion,” he told AFP news agency.

Joshua Wong, 24, one of Hong Kong’s most prominent democracy activists, was arrested for allegedly breaching the anti-mask law and his participation in anti-government rallies in 2019.