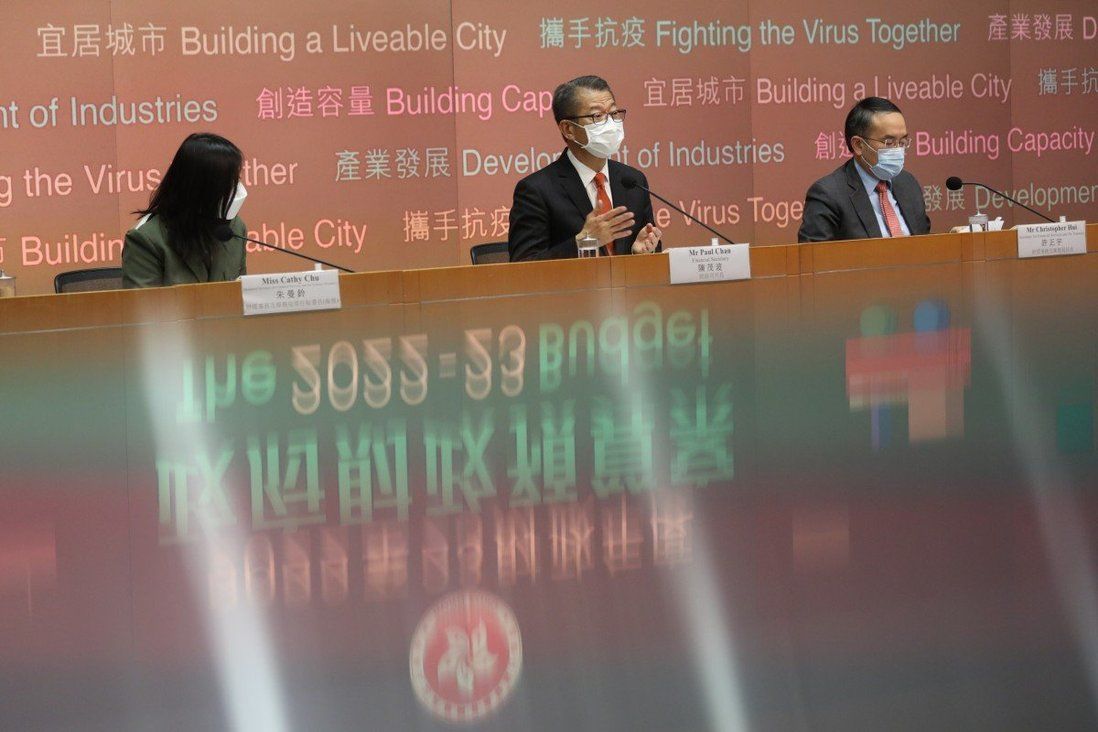 Hong Kong government has made a habit of ‘underestimating surpluses, overestimating deficits’

Financial Secretary Paul Chan Mo-po’s explanation for how Hong Kong turned an anticipated budget deficit into a surplus amounted to a “distortion” of public accounts that helped the government justify its tax policies and boost investors’ confidence, economists said.

Some took issue with including the proceeds from government bonds and the movement of funds as revenue, resulting in a surplus of HK$18.9 billion (US$2.42 billion) for 2021-22.

Some also expressed unease at the city’s drastic increase in recurrent expenditure and warned that Chan’s new top-up tax targeting large multinationals might not generate revenues as substantial as the administration expected.

A year ago, Chan estimated that the government was looking at a deficit of HK$101.6 billion in 2021-22, a third consecutive year of spending more than it earned. Instead, he announced a surplus when he delivered his budget speech on Wednesday.

Asked to explain at a press conference afterwards, Chan conceded that there was a surplus only because of expected income from green bonds issued by the government. 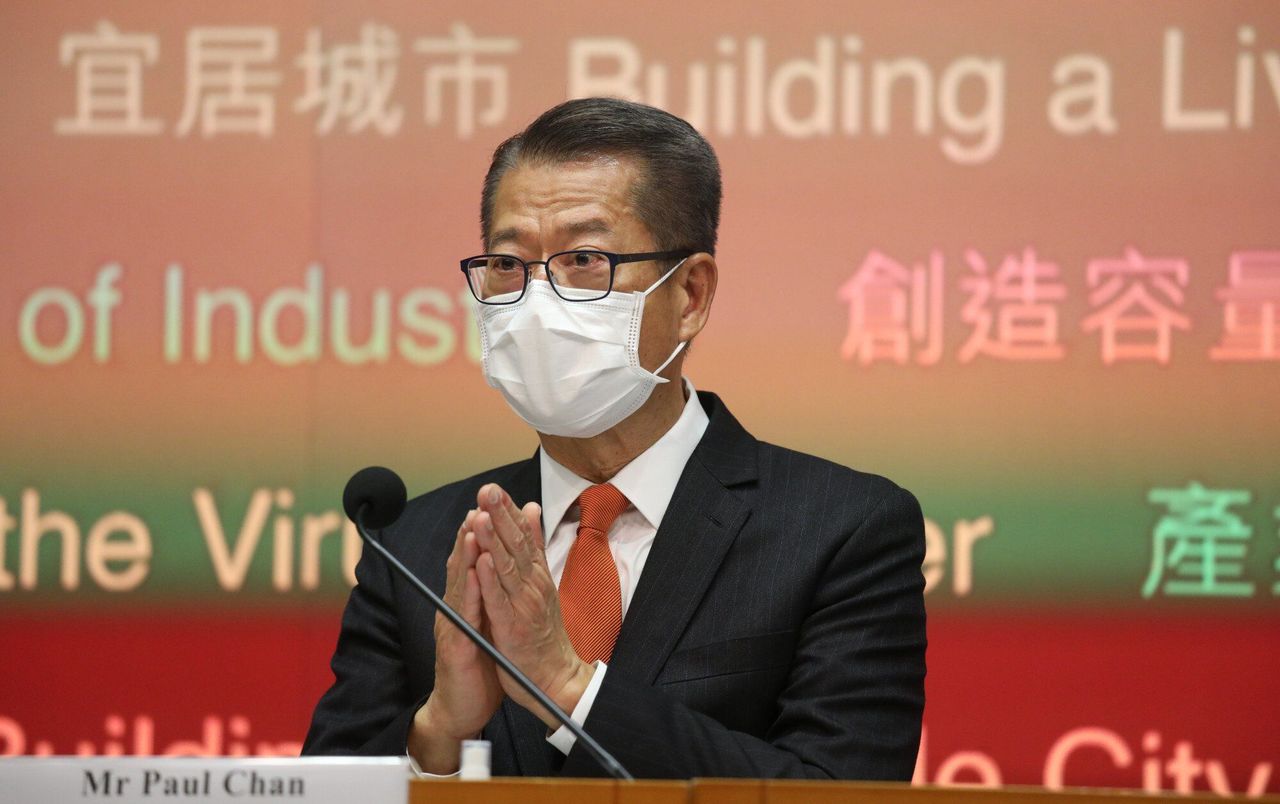 “We issued more than HK$35 billion in bonds. If we discount that, we would have recorded a deficit,” he said.

Chan said the deficit might have been at least HK$60 billion if not for about HK$20 billion moved from the Housing Reserve to the fiscal reserves, and HK$25 billion in investment returns from the Future Fund.

Pang said that even if authorities had recorded a deficit, it was normal for governments to be in the red during the Covid-19 pandemic.

“I’m not too concerned because the deficits were caused by the pandemic, which just popped up unexpectedly,” she said.

Others were not surprised that Chan relied on bond proceeds and transfers from funds and reserves to achieve a surplus.

Marcellus Wong Yui-keung, former president of the Taxation Institute of Hong Kong, said that as the budget was prepared and presented on a cash basis, it was acceptable to include the proceeds from the sale of green bonds.

Aries Wong Kin-ming, a senior lecturer of Baptist University’s department of economics, said the government had a habit of “underestimating the surplus and overestimating the deficit” to justify its taxation and expenditure policies, but that could result in distortions to the public accounts.

“If the reported surplus fails to accurately reflect Hong Kong’s economic outlook, how can we leverage public resources?” he asked.

However, Wong added that he understood that the city authorities hoped to avoid long-term deficits which might be “detrimental for foreign investors’ faith”.

Terence Chong Tai-leung, an associate professor at Chinese University’s department of economics, said the latest estimated surplus of HK$18.9 billion was on the low side compared to surpluses exceeding HK$50 billion in the nine years after Hong Kong’s return to Chinese rule in 1997. The highest surplus recorded was more than HK$148.9 billion, in 2017-18.

He added that the government’s established conservative estimations stemmed from the Basic Law, the city’s mini-constitution, which said Hong Kong must follow the principle of “keeping the expenditure within the limits of revenues” in drawing up its budget, and strive to avoid deficits.

In his latest budget, Chan proposed increasing revenues through a progressive rating system for domestic properties and a domestic minimum top-up tax for large multinational enterprise groups to ensure their tax rates reach the global minimum effective tax rate of 15 per cent. He estimated these measures could earn about HK$15 billion a year.

He said Hong Kong was among more than 130 jurisdictions that pledged last year to implement international tax reform proposals drawn up by the OECD to address base erosion and profit shifting.

But both Pang and Wong had reservations, saying foreign multinationals might still choose to shift their profits to tax havens.

Citing research published in 2018, Wong said that an estimated 40 per cent of multinationals’ profits were moved to maximise profitability. Applying a uniform rate would result in an increase in profits of about 15 per cent in high-tax European Union countries and fall by 60 per cent in established tax-havens.

The biggest spenders include the Social Welfare Department, whose expenditure was estimated to have risen 9 per cent year-on-year to HK$104 billion in 2022-23.

The police force’s spending was also estimated to have increased to HK$26.7 billion in 2022-23, up 15 per cent from the previous financial year.

The new budget also doubled the spending for the Housing Department to HK$7 billion as part of efforts to boost the supply of transitional housing.

Chong said the increases were not alarming when compared with many other places, and added that he remained optimistic about Hong Kong’s economic outlook as the financial industry and intermediary trade – the two major components of the city’s GDP – were largely unaffected by the Covid-19 outbreak.

But Wong suggested that policymakers make it a priority to consult residents on how big they would like their government to become.

“Whether a government should spend more and more is a social preference. The next question in Hong Kong is what channels we have to let people have a say in policymaking,” he said.