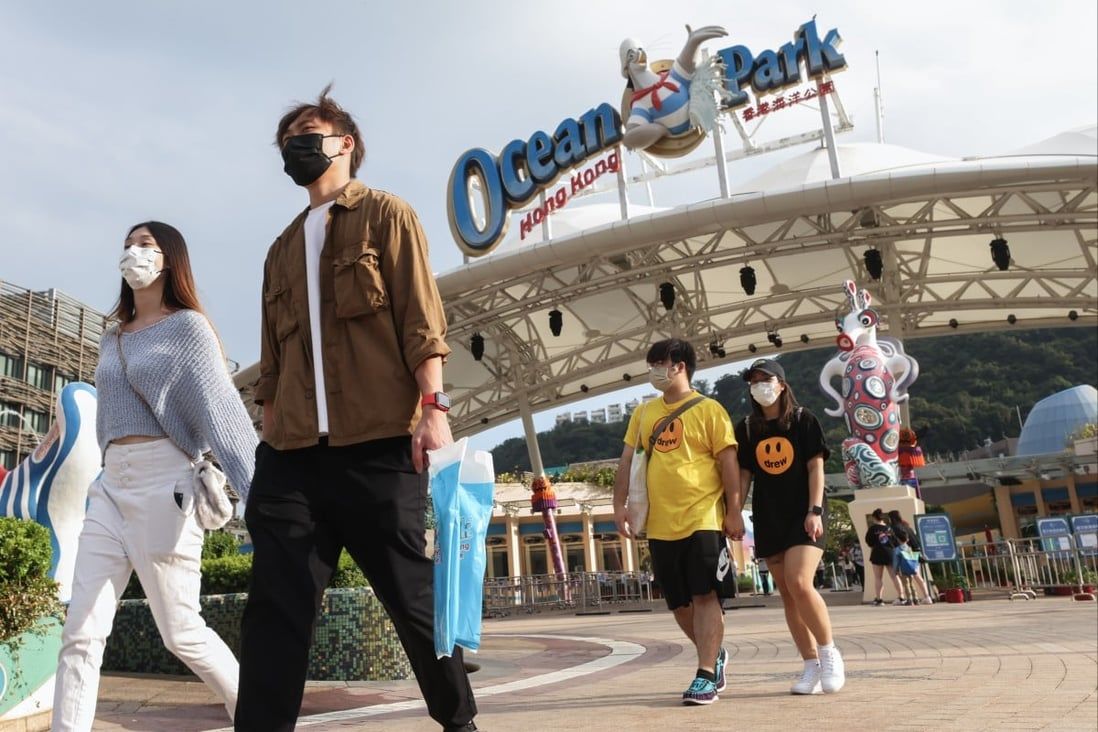 Hong Kong’s Ocean Park racked up nearly HK$1.82 billion (US$234 million) in losses in its latest financial year, even as revenue jumped by almost 40 per cent against the previous 12 months.

The Ocean Park Corporation on Wednesday put much of the blame for its latest financial performance on a HK$1.76 billion one-off impairment loss on property, plant and equipment and right-of-use assets, and about HK$513.7 million in depreciation and other losses.

“The impairment losses, however, were only for book provision and had no impact on the corporation’s cash flow,” the park said, adding its bank balance and cash exceeded HK$1.31 billion as of June.

Attendance figures also remained flat, at about 1.4 million, despite the launch of Water World in September last year. The site, which was expected to open in 2017, had attracted 200,000 visitors by the end of the financial year, according to the corporation. 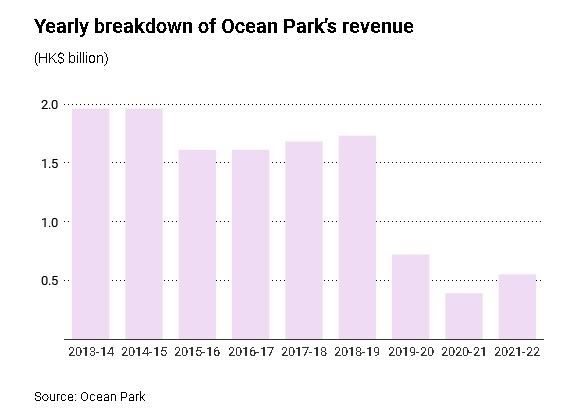 The park also had fewer animals after 561 died, most of them fish, leaving 6,453 critters in its care, the company said.

“The fiscal year 2021-22 was particularly challenging because of macroeconomic uncertainty, unfavourable geopolitical development, and the lack of inbound tourism due to Covid-19 restrictions,” CEO Ivan Wong Chi-Fai said.

The park was shut for nearly a third of the 12 months covered in the report due to pandemic-control restrictions.

“Despite the difficult operating environment … the park is on track with its transformation into a resort destination grounded in nature, conservation and education and complemented by adventure and leisure to enhance the visitor experience,” Wong said. “We are confident of moving towards sustainable growth.” 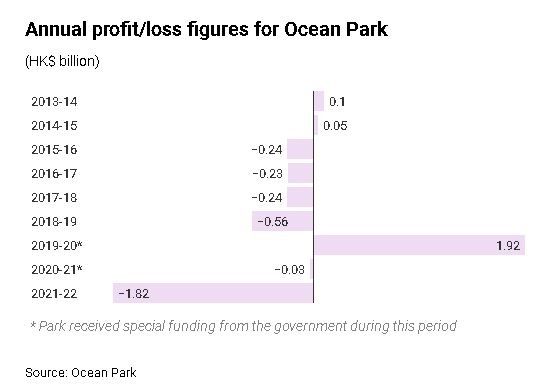 Timothy Chui Ting-pong, executive director of the Hong Kong Tourism Association, said Ocean Park was suffering along with the rest of the industry.

“As a key component of the local tourism, Ocean Park would inevitably experience the same ups and downs as other trades in the tourism sector, like aviation and hotels,” he said. “The theme park is still a favourite destination for many tourists. If the government can ease its covid restrictions sooner to help revive the tourism sector, the park’s business should be able to turn much better quickly.” 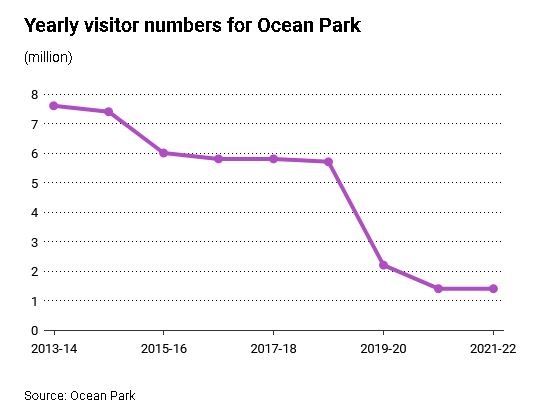 But business slumped in the years afterwards, and annual deficits worsened to HK$200 million before easing to a HK$31.8 million loss in the 2020-21 financial year, when the government supplied a HK$5.4 billion bailout. The emergency funding provided a window for management to come up with a new plan for the park’s survival and allow payment of HK$3 billion in commercial debt. 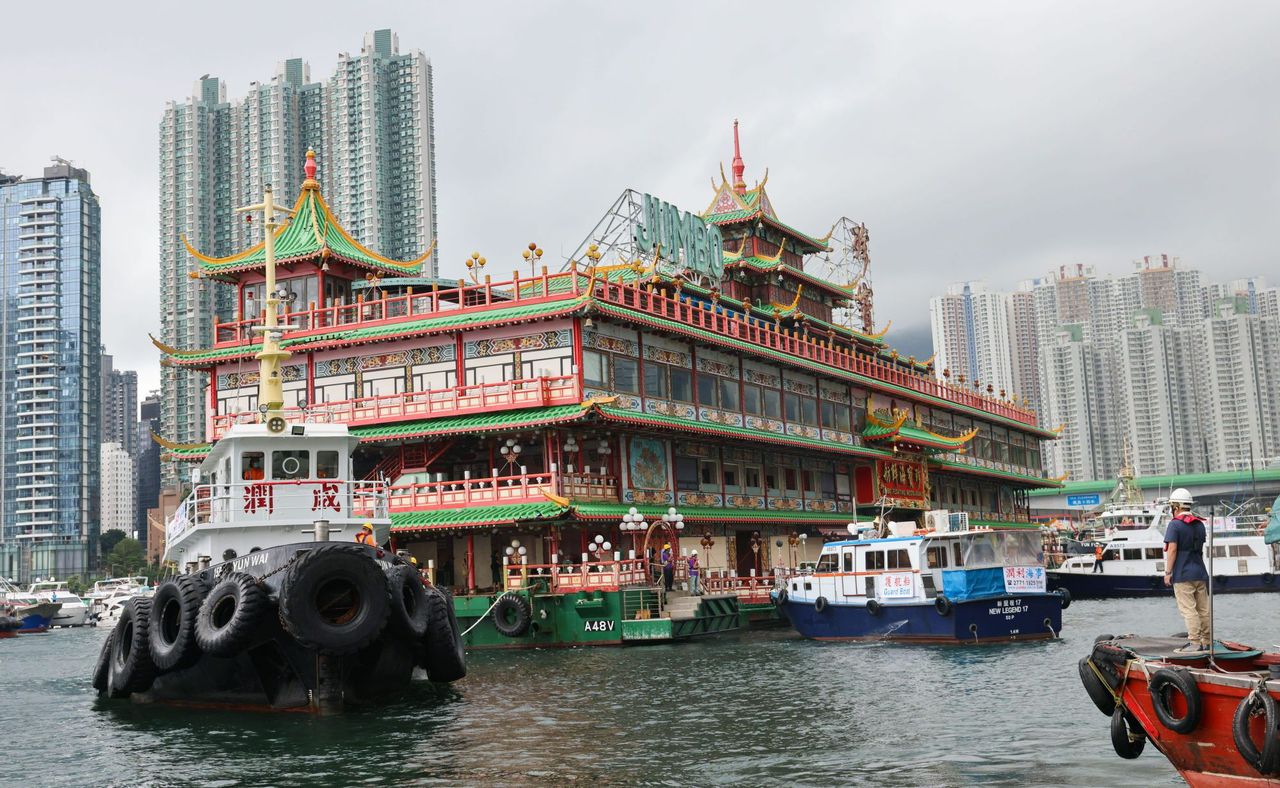 The Jumbo Floating Restaurant was meant to become part of Ocean Park’s attractions, but sank in the South China Sea while on its way to Cambodia.

A possible solution to the company’s woes was put forward in 2020 by then chief executive Carrie Lam Cheng Yuet-ngor in her Invigorating Island South initiative, which called for Ocean Park to take over the Jumbo Floating Restaurant in Aberdeen.

At the time, the government said it would help the park’s management and NGOs revamp the restaurant and turn it into a cultural heritage and tourist attraction. When the talks failed, Jumbo’s owners decided to try their luck in Cambodia, but the vessel sank while crossing the South China Sea.