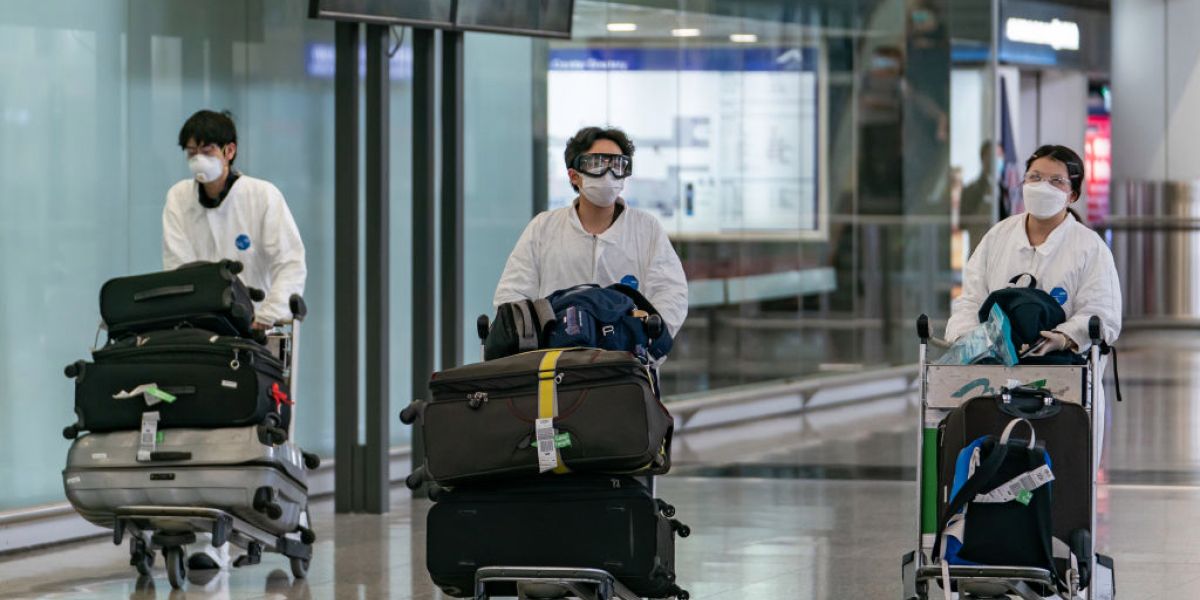 The city is relying on new devices to monitor those under mandatory two-week quarantine.

Hong Kong is undertaking a major surveillance operation to keep tabs on the thousands of passengers arriving at its borders amid fears that travelers will unleash a new wave of coronavirus cases.

Starting Thursday, the local government enforced a mandatory 14-day quarantine followed by two weeks of medical surveillance for all arrivals coming into the Special Administrative Region (SAR). The government is also aiming to slap tracking bracelets on all entrants to ensure no one breaks containment.

“If we do not impose tougher measures at this stage, our previous efforts to prevent the disease from spreading throughout these two months could be completely wasted,” Hong Kong Chief Executive Carrie Lam said on Tuesday.

Until recently Hong Kong had kept its infection rate relatively stable, with just 141 as of Sunday. That number jumped to 208 by Thursday, however, with at least 50 of the previous 57 cases reportedly returning from overseas.

Hong Kong has used wristband trackers before, issuing at least 30 of them in February. However, supplies were too low. According to a press release from the Hong Kong government, it has placed over 50,000 people under home quarantine since early February, most without wristbands, since it initially only had 500 of the devices.

The original wristbands didn’t contain GPS chips and so weren’t technically location trackers. Instead, they monitored the wearer’s proximity to a base station, which was a smartphone that had been modified to only work when plugged into the wall.

The bracelet paired with the smartphone via Bluetooth, and if the phone was turned off, the bracelet was removed, or the wearer ventured too far from the phone, the Department of Health got an alert. Under Hong Kong law, people who violate quarantine can be subject to a $640 fine or a six-month prison sentence.

However, the new wristbands strapped on the limbs of arrivals are different. The latest model contains a QR code that the wearer scans using a smartphone app. The tracker then uses “communication signals” to ensure the wearer remains within the confines of his or her home.

Explaining the new device to reporters on Wednesday, Hong Kong chief information officer Victor Lam said the bracelets do not capture the wearer’s precise location but rather a change in location.

Lam also said that the wristband’s rollout had been made in consultation with the Privacy Commissioner for Personal Data—an independent statutory body established to enforce Hong Kong’s rules on privacy.

The government has ordered 60,000 of the monitoring devices, but currently has a first batch of only 5,000. It appears wristband supply will be a problem almost immediately; airport arrivals have dropped off significantly because of the virus, but nearly 13,000 passengers still landed in Hong Kong on Wednesday, according to Hong Kong’s Immigration Department.

Checking in
Hong Kong is not the only place to impose tracking measures on arrivals. In Thailand, arrivals from “at risk” countries are being provided with SIM cards so that they can download a government-mandated app that monitors their location. Israel has approved emergency measures to track suspected cases.

South Korea is reportedly developing a system to retroactively verify where confirmed coronavirus patients have been, by combing surveillance footage, credit card transactions, and other data to paint a picture of the patient’s movements.

Seoul, which successfully beat back the country’s first wave of the coronavirus, encourages quarantined individuals to download an app for tracking and communication purposes, too. The government says the app isn’t mandatory, but the alternative is receiving unscheduled phone calls to your home.

Hong Kong is likewise warning that health officials will conduct “surprise video calls” with quarantined people to ensure they are where they should be.