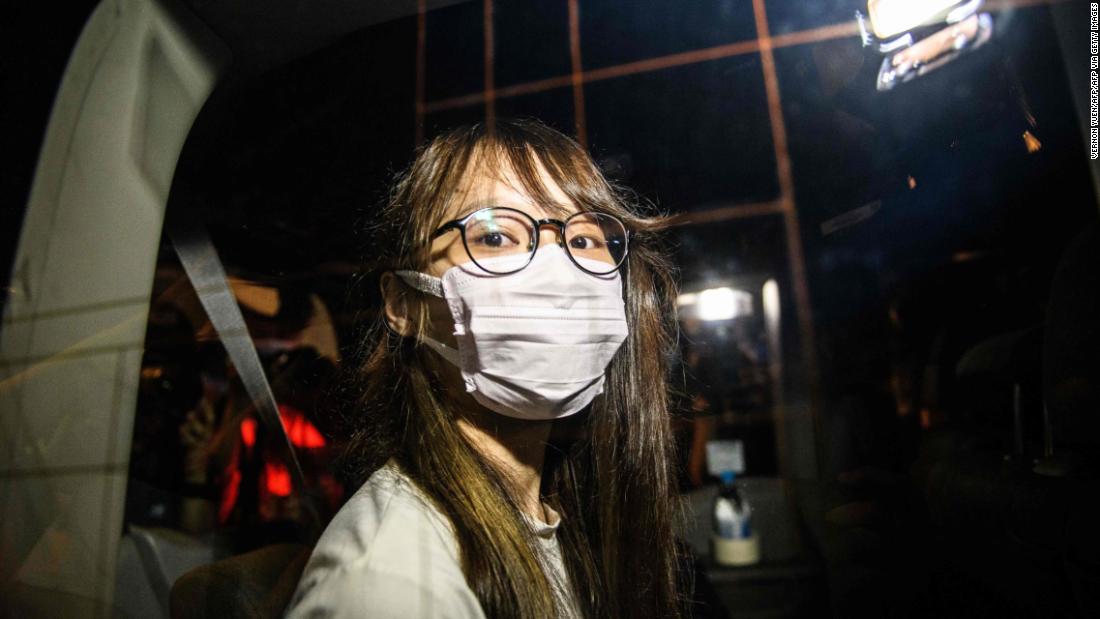 It's been less than six weeks since a security law banning secession, subversion and collusion came into force in Hong Kong. But it's already having a dramatic effect on the city's political, media and online spheres.

On Monday, some 200 police officers raided the headquarters of Apple Daily, the city's most-read pro-democracy newspaper. A number of top executives were arrested, including the paper's multi-millionaire owner Jimmy Lai. Police said Lai faced charges of colluding with foreign countries, a crime under the new law.
Lai had strong ties in Washington, particularly with the Republican Party, and has testified before US Congress in the past.

Hours later on Monday, Agnes Chow, a 23-year-old pro-democracy politician, was arrested on suspicion of inciting secession, another new offense. Chow is a former member of Demosisto, a political party founded by prominent activist Joshua Wong that was disbanded shortly after the security law came into force.
Another former Demosisto leader, Nathan Law, has fled overseas, where he is being sought by Hong Kong police.

Prominent Hong Kong democracy activist Agnes Chow looks out of a car window while being driven away by police from her home after she was arrested under the new national security law in Hong Kong late on August 10, 2020.

Earlier this month, a dozen pro-democracy candidates were barred from standing in upcoming legislative elections on national security grounds. Soon after, the elections were postponed until next year, which the government said was due to a recent spike in coronavirus cases in the city.

When the security law was introduced, the government offered assurances that the legislation was limited in scope and would -- in the words of Hong Kong leader Carrie Lam -- only target "an extremely small minority of offenders while the life and property as well as various legitimate basic rights and freedoms enjoyed by the overwhelming majority of citizens will be protected."

Since then 24 arrests have been made using the law, including protesters and students over social media posts. More broadly, the law has also stymied the work of a number of prominent pro-democracy figures -- and now one of the city's most-popular newspapers.

That has led to fears that Hong Kong is rapidly transforming into a city where political opposition is muzzled, its once free-wheeling press cowed, and online dissent carries the risk of imprisonment.

Apple Daily, founded by Lai in 1995, has long been the city's loudest, and most salacious, anti-government voice.

The tabloid, which mixes celebrity gossip with political coverage, has struggled to attract advertisers due to its stance, and Lai has faced harassment, threats, and multiple criminal cases for his activism.

Many observers, including Lai, had predicted that he and the paper would be targeted under the new law, but Monday's raid was nevertheless met with shock by many in Hong Kong, particularly due to the scale of the police operation, which was livestreamed online by Apple Daily's own reporters.

Following the arrests, "Free Jimmy Lai" quickly trended on social media, and hundreds of people -- spaced out to comply with coronavirus restrictions -- queued into the early hours of Tuesday to buy copies of Apple Daily.

By 9 a.m., some shops were reportedly sold out, despite the paper printing half a million copies, almost eight times as many as usual, in anticipation of such a run. Tuesday's front page read "Apple Daily shall fight on."

In a statement, the city's Foreign Correspondents' Club said Monday's actions were a "direct assault on Hong Kong's press freedom and signal a dark new phase in the erosion of the city's global reputation."

The moves against Apple Daily were also condemned by politicians in the US and Europe, international press groups, legal commentators, and the editorial board of the New York Times, which called them the "clearest signal that China intends to make full use of that sweeping new legislation to stifle free expression and undermine Hong Kong's pro-democracy movement."

An official representing the Chinese Foreign Ministry in Hong Kong said Monday that the FCC had "misrepresented the truth, heaped groundless accusations upon the National Security Law and law-enforcement efforts of the Hong Kong police, and tried to whitewash and justify Jimmy Lai and other criminal suspects."

Copies of the Apple Daily newspaper - paid for by a collection of pro-democracy district councillors - sit on a cart before being handed out in Hong Kong on August 11, 2020.

Speaking to CNN after Monday's raid, pro-democracy lawmaker Claudia Mo said the city's opposition was "being pushed into a dead end."

Apple Daily was the "last bastion" of press freedom in Hong Kong, she added. "(The government) is sending a very dire signal not only to the local press but also the foreign press in Hong Kong: you watch out."

Any doubt that the arrests of Lai, Chow and others were intended to send a message could be dispelled by Chinese state media's coverage, which laid it out clearly.

The state-owned newspaper China Daily said Lai's arrest was the cost of "dancing with the enemy," and said that "instead of being grateful for having been condoned for the offenses he committed before the enactment of the new national security law ... Lai continued with his treacheries, including intriguing with foreign elements to undermine national security."

Another state-backed paper, Global Times, quoted the prominent Chinese legal theorist Tian Feilong as saying that under the new law "the legal boundaries have become much clearer."

"Opposition groups should know how to adjust to a changing environment," Tian said.
They may be trying to adjust, but as this week's developments show, the environment is changing faster than many expected.