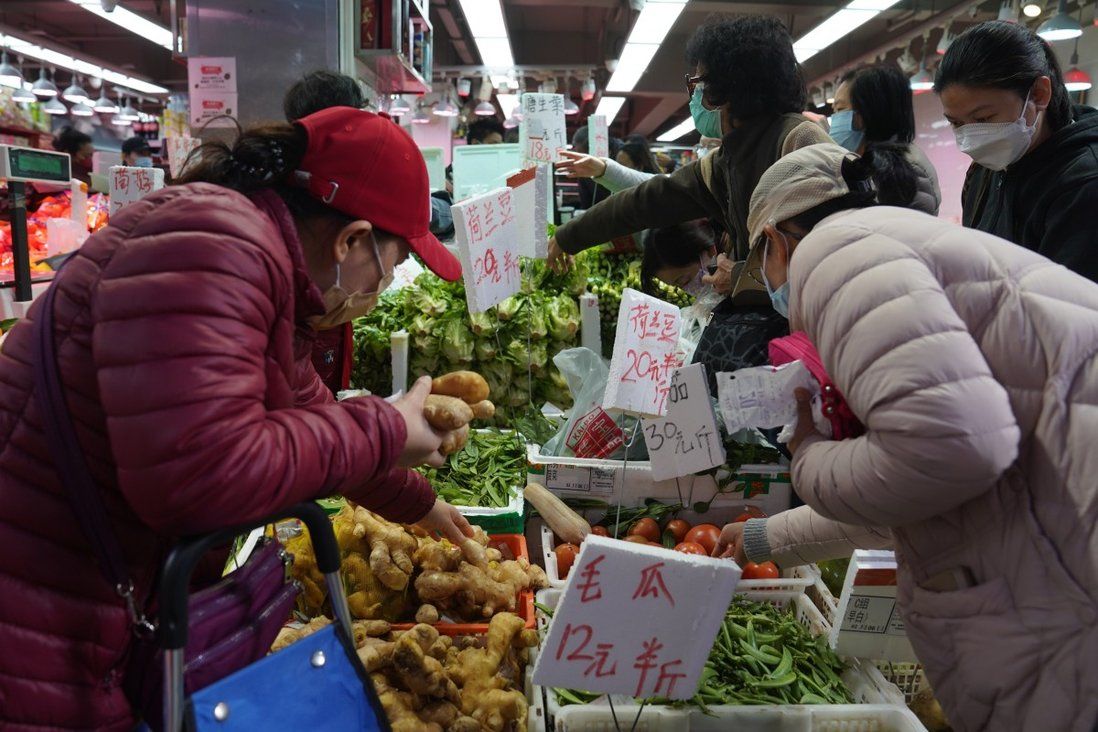 While not inaccurate, the official figures mean little when it comes to assessing poorer households’ suffering or shaping public policy. An inability to target government support will result in families not getting the help they need and taxpayers’ money being wasted.
As if worries about Omicron were not enough, recent weeks have seen alarm bells ringing over inflation. Disruption of fresh vegetable supplies, as infected truck drivers have been held at the mainland border crossing, has combined with the usual Lunar New Year price surge to trigger a wave of panic buying.

The supply chain disruption was a warning of more than inflation. It was a reminder of Hong Kong’s extraordinary food insecurity. We not only have to import 90 per cent of our food but rely on the mainland for 90 per cent or more of our pork, beef and vegetables.

Ever since the 2020 swine flu outbreak tore through China’s pig population, I have grown used to the sorry sight of old ladies in my local wet market digging into their purses to afford an ounce or two of minced pork. But the price of bak choi jumping from the usual HK$20 per catty to HK$45 (US$2.50 to US$5.80) has been a bit of a shock.

Heads of broccoli are also more expensive – usually three for HK$14 but last weekend up to HK$20 for a single head. Our cooking oil has jumped from HK$72 for five litres to HK$115, and our normal pack of salt has jumped to HK$4.90 after selling last month at HK$2.90.

It seems inflation has returned. As with the rest of the world, there are arguments about whether it is likely to be temporary or sustained.

And yet, if you ask our Census and Statistics Department, Hong Kong’s consumer price index (CPI) is up by just 2.4 per cent and by only 1.4 per cent when factoring out the government’s one-off relief measures in the past year. That all seems modest compared with the surge in the United States to 7.5 per cent in January and to 5.4 per cent in Britain.

The government’s most recent Economic Situation Report tells us that “underlying inflation should stay broadly in check in the near term”. We suffered a 54.2 per cent surge in electricity, gas and water charges in December and clothing and footwear prices were up by 8.7 per cent, but food prices were up by just 1.9 per cent.

It’s not that the Census and Statistics Department is lying. Rather, the problem is that the data does not provide the insights we need.

Tim Harford wrote in last week’s Financial Times that in Britain, the Office for National Statistics collects 6,000 price quotations every day across the UK to compile its consumer price index. I am sure our Census and Statistics Department staff here are similarly conscientious.

“Is this statistical firepower well-aimed?” Harford asks. “Yes, if the aim is to measure inflation across the economy. But no if we want to understand what is happening to the poorest households.” He notes that the average colour of a rainbow is white, but this average provides no glimpse into what a rainbow actually looks like.

The challenge he raises is to the system by which most statistical agencies measure inflation. It is often meaningless when it comes to measuring the suffering of our poorest households or tailoring government policies that can provide relief where it is most effective.

That means they are not the most useful numbers for Financial Secretary Paul Chan Mo-po as he finalises the relief he is under pressure to include in his budget later this month. Spending on wine, steak, abalone and international holidays might be elements of the CPI, but they only apply to Hong Kong’s wealthier families.

Devising an index that focuses on the spending needs of the poor might be a good idea. Work on this by Chris Giles of the Financial Times suggests “inflation is much the same for everyone”.

Our statisticians are unable to take meaningful account of how humans behave in the face of hardship and how families tweak their shopping habits when budgets are under stress. Faced with a tight budget, a family is first going to list the essentials.

That list is going to vary from country to country. In the US or UK, petrol prices will be a high priority, with recent oil price increases imposing a fierce squeeze on almost every household budget.

In Hong Kong, with public transport being fast and efficient, car ownership is low and petrol prices are unlikely to be high on the “essentials” list of most working-class families. The first step for a hard-pressed family is to get clear about the essentials, separate the needs from the wants and recognise that the wants have to wait.

There are then some essentials you don’t need to buy tomorrow. For some essentials, an immediate option is to trade down on brands. That is why supermarkets have their in-house brands.

A savvy shopper on a tight budget will also head for the “reduced to clear” shelves or take advantage of special offers. My wife meticulously combs the Wellcome and ParknShop websites to compare prices and catch good offers.

Needless to say, no statistician working on the CPI has the capacity to take any reliable account of price volatility. On the contrary, their job is to ignore such oscillations.

Their task is to track the same goods, month after month, even though this is next to useless for a hard-pressed household shopper or a financial secretary preparing a budget in which he knows he has to prioritise government support to those most in need.

Most statisticians will provide data that shows “white rainbows” all over the place, but what we need is data that can pick out the colours. Without that, our poorest families will not get the help they need and our government will be wasting our money.
Add Comment