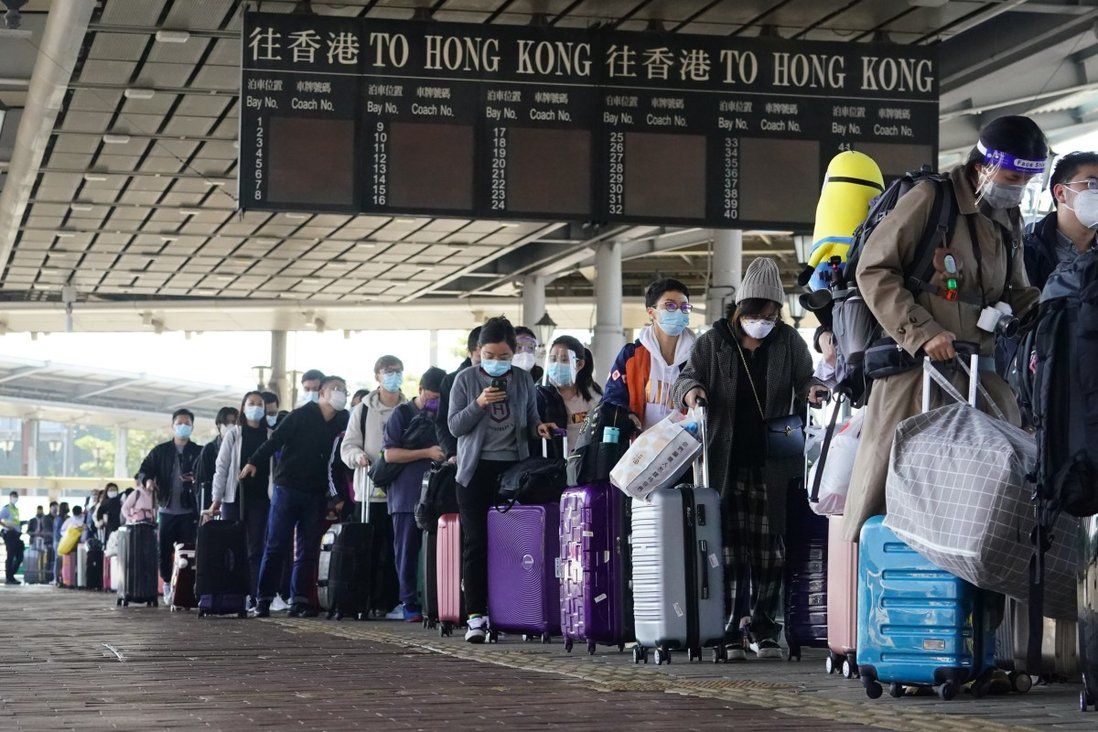 The proposal is among 21 initiatives to be put forward at meetings of mainland China’s top legislature and advisory body.
Hong Kong’s biggest pro-establishment party has said it would urge mainland Chinese officials at the country’s two most important annual conferences to establish remote channels for local residents to manage cross-border affairs amid the city’s Covid-19 crisis.

Delegates from the Democratic Alliance for the Betterment and Progress of Hong Kong (DAB) on Wednesday said the proposal was one of 21 initiatives that would be put forward at meetings of the country’s top legislature, the National People’s Congress (NPC), and advisory body, the Chinese People’s Political Consultative Conference (CPPCC).

The CPPCC’s annual session starts on Friday, while the opening of the NPC is set for the following day.

The DAB attendees said they aimed to address the concerns of Hongkongers who were struggling to resolve personal and business dealings in bordering mainland cities because of quarantine measures imposed over the past two years.

The arrangement would cover business, real estate and driving licence registration, as well as pensions and taxation, in the Greater Bay Area, which covers Hong Kong, Macau and nine cities in Guangdong.

“We don’t know when the resumption of normal travel will come and many Hongkongers have failed to renew their documents and licences [on the mainland] during this period, causing some to have expired and bank accounts to be frozen,” DAB lawmaker Rock Chen Chung-nin said.

The lawmaker cited the example of Jianmen, a city in the bay area, which had established similar platforms last year for handling public services.

He suggested expanding Jianmen’s existing arrangements to include private dealings as well as implementing the proposal across the region.

DAB chairwoman Starry Lee Wai-king also suggested allowing freer capital flows to help Hongkongers buy property across the border, including scrapping a daily cap of 80,000 yuan (US$12,670) on the amount of money transferable to the mainland, in addition to limits regulating fund conversion.

She added that restrictions on the direct transfer of money to sellers should be eased to allow for the purchase of second-hand homes.

Hong Kong buyers can currently transfer money between their own bank accounts in Hong Kong and the mainland, but cannot wire money to an account belonging to another person.

NPC deputy Brave Chan Yung said he would push for sweeping legislation to ban the consumption of dogs and cats, which he believed had damaged the nation’s image.

Tam Yiu-chung, the city’s sole delegate to the country’s top legislature body, the NPC Standing Committee, said his party would propose amending border constraints to allow ambulances in both Hong Kong and neighbouring mainland cities to send patients to hospital on either side.

Hong Kong has 36 NPC deputies, while 202 delegates are invited to the advisory body’s conference. About 60 have signed up to join the two sessions this year.

However, 16 members of the delegation are undergoing extended quarantine, after CPPCC member Irons Sze Wing-wai tested positive for Covid-19 last week after arriving at a Shenzhen hotel for isolation.

The quarantined delegates, who include Ma Fung-kwok, the leader of the Hong Kong delegation to the NPC, will miss the two sessions.

Tam said he expected at least a dozen NPC deputies would still be able to make it to Beijing together with other CPPCC delegates.
#COVID-19  #Covid
Add Comment