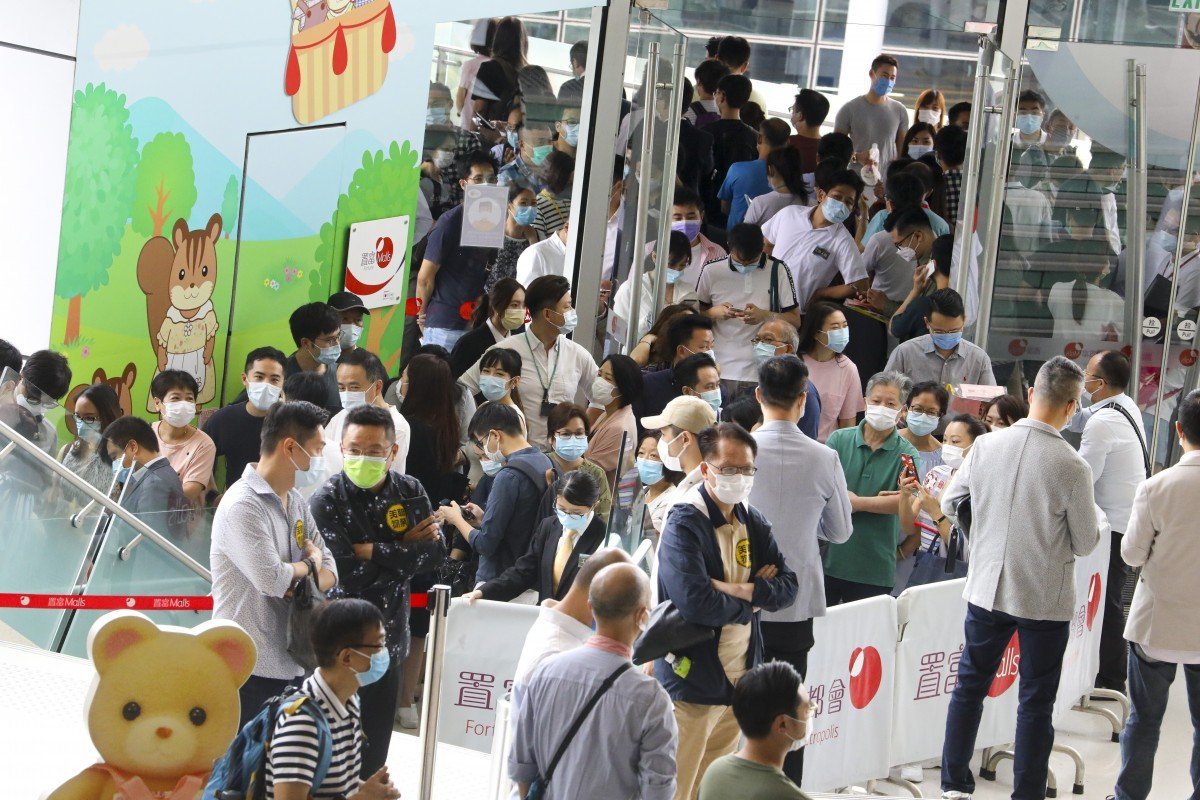 The weekend sale, with the most number of flats on offer since July 13, 2019, is little comfort for Hong Kong’s developers, who have to make up for lost time to clear their glut of unsold flats after the coronavirus pandemic drove the city’s economy into its worst recession on record, crimping jobs and the appetite for large financial commitments.
Hong Kong's biggest weekend property sale in 14 months fizzled out after an initial buzz, as buyers took their pick of 726 flats offered in six locations across the city, snapping up the lower-priced units that qualified for mortgage financing.

Six developers managed to sell 293 flats, or 40 per cent of the total offer between them as of 9:30pm, agents said. The sale, which was a mixed success earlier in the day, failed to make progress in the afternoon when most of the buying interest focused on three projects were met.

“Among all the different choices, flats valued between HK$5 million and HK$10 million (US$1.3 million) have had the best sale result, driven by demand among first-time buyers,” said Louis Chan Wing-kit, Asia-Pacific vice-chairman and chief executive of the residential division at Centaline Property Agency.

“The result was not too bad, given that the virus situation in Hong Kong had only begun to improve.”

The weekend sale, with the most number of flats on offer since July 13, 2019, is little comfort for Hong Kong’s developers, who have to make up for lost time to clear their glut of unsold flats after the coronavirus pandemic drove the city’s economy into its worst recession on record, crimping jobs and the appetite for large financial commitments.

More than 30,000 newly completed and unsold homes were forecast to come on the market in January, before the coronavirus pandemic forced all sales and marketing campaigns to be shelved, according to data by Centaline Property Agency and Midland Realty.

Henderson Land Development reported the best results with its Two Artlane project in Sai Ying Pun, selling 58 flats, or 80 per cent of the 72 units on offer, with as many as 13 buyers bidding for each available apartment on average. Prices ranged between HK$6 million and HK$11.1 million, or HK$25,849 per square foot to HK$31,429 per sq ft.

Sun Hung Kai Properties (SHKP), the city’s biggest developer by capitalisation, sold 144 flats at its Wetland Seasons Park project in Tin Shui Wai, or 64 per cent of the 226 available units, with as many as 14 buyers bidding for each unit on average. Prices ranged from HK$12,011 per square foot to HK$17,765 per sq ft.

Competition was less intense in Sham Shui Po, where the ITC Properties Group and the Urban Renewal Authority were selling a joint project called Hyde Park. A total of 21 out of 50 flats were sold, with prices starting from HK$5.4 million and going up to HK$9.7 million, or HK$17,975 to HK$22,542 per sq ft.

Le Pont, an estate in Tuen Mun built by the Chinese developer Vanke Property (Hong Kong), sold a single unit out of the 87 flats on offer. Most of the units will be sold by tender, which will close in the next year.

Meanwhile, the Kowloon Development Company’s project 63 Pok Fu Lam in Sai Ying Pun floated six units on the market after previous buyers walked away from them, resulting in an estimated combined penalty of HK$6 million. One of them has been taken up.

Demand for mass-market residential property remains resilient in Hong Kong, even though the city’s unemployment rate has hovered around 6 per cent for months at a 15-year high, and the economy has contracted for four straight quarters through June in the city’s worst recession on record.

The Centa-City Leading Index, a gauge of secondary home prices compiled by Centaline Property Agency, has fallen 7 per cent from a recent peak in June 2019 but remained little changed this year.

Home prices are likely to remain stable over the next nine months, according to projections by Jeff Yau, property analyst at DBS Bank (Hong Kong).

A worldwide low-interest rate environment has strengthened homeowners’ willingness to hold their assets instead of selling, while housing supply is likely to fall gradually in the coming year to provide further support for prices, Yau said during a press briefing on Friday.

“Even though more people have considered emigrating from Hong Kong over the past year, I haven’t seen a big impact on the housing market so far,” Yau said, adding that he expects mass-market projects to outperform luxury homes in this market cycle.
#Coronavirus
Add Comment