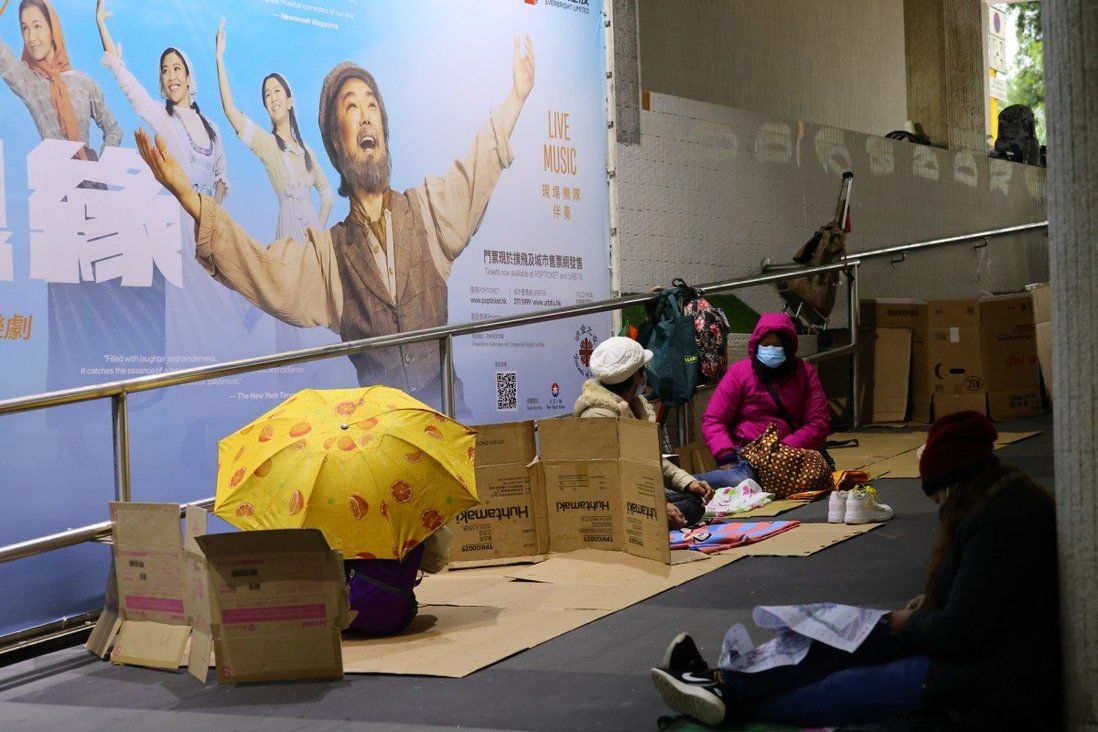 The number of domestic helpers needing immediate help with home quarantine after testing positive for Covid-19 has ballooned from a handful to nearly 70 in less than a week, concern groups have revealed.

A coalition of 14 NGOs serving migrant workers’ interests told the media on Tuesday they were trying to secure alternative accommodation for the workers, including university dormitories or religious retreat housing, but they were being frustrated by social-distancing rules and red tape.

HELP For Domestic Workers first received urgent calls from five domestic workers last Wednesday who had nowhere to serve their home quarantine after testing positive for the coronavirus. The number of requests had since jumped to 68, it said.

Fourteen workers were at risk of being homeless on Tuesday night as shelters were filling up quickly, according to the group’s executive director, Manisha Wijesinghe.

At one shelter, 11 domestic workers were crammed into a single room, she said, emphasising the situation was “not ideal, especially if people were sick”.

Most of the cases involved workers who had finished or terminated contracts and tested positive before departing Hong Kong, Wijesinghe said.

PathFinders chief executive officer Catherine Gurtin said that while donors have stepped forward to help many charities, the situation was changing rapidly.

“We just don’t want to see these women on the streets, especially with the cold weather warning,” Gurtin said.

NGOs had reached out to ask whether university dorms could be used to temporarily house the workers facing homelessness, but the idea could not work because there was no permission from health authorities, she said.

Gurtin called on health authorities to be flexible and grant organisations leeway to devise temporary solutions to the shortage of spaces, saying: “We want to help. Help us to help you.”

Cheung-Ang Siew Mei, executive director of Christian Action, said churches and NGOs had opened up their shelters but the spaces were not enough to cope up with the sudden rise of cases.

“We do not have the capability, or the staff or the know-how to run a quarantine facility,” she said. “Even if we want to, we can’t any more because we are full.

“There needs to be some grace. They take care of Hong Kong families, but there’s no one to take care of foreign domestic helpers.”

Religious retreat centres had considered taking in some domestic workers but they were not allowed as current social-distancing rules require them to stay shut, she said.

Cheung-Ang added that the Labour Department was considering allowing helpers to stay at camp sites but the facilities could not be not opened fast enough to cope with the influx.

Stephen Wong Yuen-shan, an Election Committee lawmaker and deputy executive director of Our Hong Kong Foundation, called on the government to respond to the crisis quickly.

“It’s an emergency situation,” Wong said. “These domestic workers have lost their health, possibly their work and are receiving no help from the government.”

Hong Kong’s fifth wave, fuelled by the rapid spread of the Omicron variant, has resulted in surging case numbers since the start of January, exceeding the total infection tally of all previous waves combined.

Employers face legal repercussions if they break the contract of a helper because they tested positive, but the government has not given any guidance on how to assist domestic workers carry out home isolation or receive hospital treatment.

The Labour Department said it was coordinating with relevant consulates to provide the necessary assistance for the infected foreign domestic workers who were no longer employed.