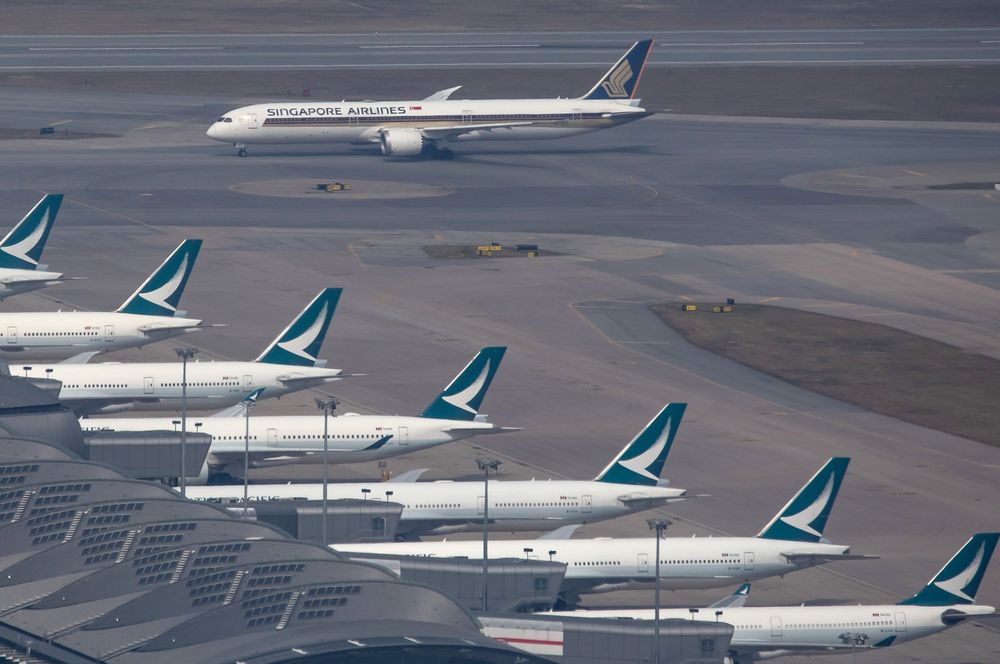 Frustrated and anxious about the government’s handling of Covid-19, some Hong Kongers are looking to flee, even if it’s just to wait out the worst of the outbreak. Rival financial hub Singapore is a popular escape.
A net 71,000 people left Hong Kong in February, the biggest outflow since the pandemic began, as the city’s most rampant wave of Covid intensified. While Hong Kong is effectively shut off from a raft of countries it deems high risk, there are 137 scheduled flights to Singapore in March, more than anywhere else aside from Shanghai, which is off limits to most non-Chinese citizens.

Many of those leaving are doing so temporarily, hoping to avoid the mandatory mass Covid tests Hong Kong plans to start in mid-March. But others are eyeing longer shifts, and schools in Singapore are receiving a surge in interest from Hong Kong parents. Lengthy school shutdowns during the anti-Beijing protests in 2019 and now Covid have left families exasperated.

“We’ve had more applications from Hong Kong in the first two months of 2022 than we had in all of 2021,” said Tom Evans, director of marketing and communications at Tanglin Trust School in Singapore’s leafy “one-north” neighborhood.

While there are obstacles to permanently relocating to Singapore -- not least obtaining work permits and visas -- the city-state is seen as a convenient bolthole. The mass testing drive, along with fears of a lockdown, family separation and being put in government isolation even if you’re asymptomatic have added to the urgency to escape.

“As much as I love Hong Kong, it’s time to move on,” said Michele Hong, a senior office worker who has lived in the city for more than 10 years, but is planning to leave for Singapore next week. “Talk about a lockdown and planned Covid tests was the last straw.”

Air traffic from Hong Kong to Singapore was building even before the latest Covid surge, which saw new infections rise to a record of more than 56,000 on Thursday. Changi Airport received 7,931 travelers from Hong Kong in January, an 88 percent jump from December and the highest number since March 2020.

Once an adherent to the same highly restrictive approach to the virus, Singapore ditched its Covid-Zero policy last year to allow vaccinated travelers from several jurisdictions including Hong Kong to visit without having to quarantine. Typically, travelers from Hong Kong can stay for 90 days.

“The pull factor for Singapore is that it’s back to a normal life,” said tech worker Sin Pui Ip, 31, who is booked on a Singapore Airlines Ltd. flight out of Hong Kong on March 13. He plans to be away for about two months, working remotely.

Singapore has long jockeyed with Hong Kong for the title of Asia’s pre-eminent global hub, and its appeal is growing as Hong Kong’s situation worsens, with panicked shoppers clearing food from supermarket shelves in fear of being locked down for days. The city’s health-care infrastructure is overwhelmed, with long waiting times for ambulances and bodies piling up at morgues.

Hong Kong was already on shaky ground before the pandemic, when anti-China protests rocked the metropolis. After nearly three years of on-and-off school closures and other disruptions to daily life, many have run out of patience.

“Hong Kong’s desirability and convenience as a place to live and work has not been the top priority in the governance of the city in the past few years,” said 33-year-old tech executive Harold Li.

Covid Zero meant Hong Kong had long spells virus free for much of the pandemic, but that came at a cost as the city largely shut itself off from the rest of the world. With border curbs still in place and Hong Kong considering tough measures to rein in the Covid surge, life looks better elsewhere.

“The hassle and risks of travel outweighed the potential inconveniences associated with staying put,” said Li, who arrived in Singapore from Hong Kong on Feb. 26 and plans to stay for up to 10 weeks.

More than 10 percent of European Union citizens living in Hong Kong have left, the EU Office to Hong Kong and Macau said last month, while a dozen senior bankers at Citigroup Inc. and JPMorgan Chase & Co. are said to have moved to places like Singapore and Australia.

Hong Kong Chief Executive Carrie Lam on Wednesday promised enough goods and medical supplies for everyone, but she acknowledged there wouldn’t be a sufficient number of beds to isolate people infected with the virus. The government is yet to confirm how and when the mass testing would be conducted, raising further questions about its handling of the crisis.

Schooling is another key driver. In addition to Tanglin Trust School, Singapore’s EtonHouse International School said it has also seen an increase in inquiries from parents in Hong Kong.

Ascott Ltd. has been fielding more queries about its serviced apartments from across the region, including Hong Kong, since January, a spokesperson said.

Business groups have warned of an exodus of foreign talent from Hong Kong because of the strict quarantine policies that make travel in and out of the once-vibrant financial hub nearly impossible. As well as schools, Hong Kong’s bars remain closed and dining out is restricted.

In contrast, visitors from more than two dozen countries, including the U.S. and U.K., can travel to Singapore with rapid antigen tests replacing mandatory quarantine. Schools are open and workers are being encouraged to return to offices.

“All of our close friends have left,” said Hong, the office worker headed to Singapore next week. “The convenience of living in Hong Kong is gone.”
#COVID-19  #Covid
Add Comment