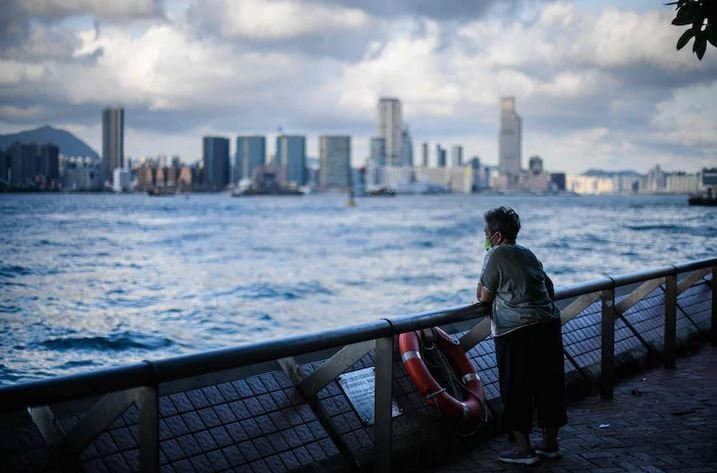 Young people desperate to escape the city are risking dangerous journeys on the South China Sea to try to reach Taiwan.

In preparing for the riskiest journey of their lives, a days-long boat voyage across the heavily surveilled South China Sea, the dozen young Hong Kongers cut out middlemen and trained to be seafarers in the hope this would increase their chances of reaching freedom in Taiwan.

The fleeing Hong Kongers - who include a prominent activist and teenage students swept up in last year's pro-democracy protests - bought a speedboat and learned to operate it, navigate and maintain the engine, people familiar with the matter said.

Reaching Taiwan would mean traversing Chinese territorial waters that surround Hong Kong. Hours after they embarked from the verdant Sai Kung Peninsula on the morning of Aug. 23, their speedboat was seized by China's Guangdong coast guard bureau about 50 miles southeast of their departure point.

It was the first public admission by Chinese authorities that they had intercepted people fleeing Hong Kong in this manner, although since late last year others have attempted maritime escapes to Taiwan, which tacitly allowed them in.

Their willingness to risk a perilous journey highlights the increasing desperation of young Hong Kong activists seeking to escape the crackdown in their city, which was once a destination for refugees fleeing war and persecution.

On this occasion, the 11 men and one woman, between the ages of 16 and 33, were taken from the boat and detained on the Chinese mainland; they face charges of illegally entering Chinese territory, according to the Hong Kong police.

Several of those on the intercepted boat had been arrested over the past year in Hong Kong, including one who was held under China's feared new national security law, according to people close to them.

Among the boat passengers was Kok Tsz Lun, a 19-year-old Portuguese national and University of Hong Kong student, whose presence could increase pressure on Chinese authorities to ensure their safety and fair legal treatment.

Portugal's consulate in Macao, which oversees matters in Hong Kong, did not respond to a request for comment, and the European Union mission in Hong Kong declined to comment.

The University of Hong Kong's engineering department confirmed that Kok is a student there and said in an email that the university is in touch with his family.

The Shenzhen Public Security Bureau did not respond to a request for comment after local media reported that the boat's passengers were in its custody.

Hong Kong police said the 12 intercepted at sea were involved in "various cases" in Hong Kong, including attempted arson, possession of offensive weapons, collusion with a foreign country under the new national security law, rioting and possession of explosives. Court orders had barred 11 of them from leaving the city, and three of them were wanted, police said in a statement Monday.

People who spoke to The Washington Post for this report did so on the condition of anonymity, citing exceptional sensitivity and fear of repercussions, including under the new security law.

Since at least November, boats have been sailing from Hong Kong to Taiwan, ferrying protesters arrested in Hong Kong's crackdown on the pro-democracy movement. More than 9,000 people were arrested by the end of June, and more than a dozen have been arrested since then under the new national security law that Beijing imposed on the city. Most of those arrested are young, and many are students.

The new law, which China has touted as a way to quell anti-government unrest and forge a new generation of patriotic youth, provides for sentences of up to life in prison for vaguely defined crimes such as secession, subversion of state power, foreign collusion and terrorism.

Facing these penalties, fleeing by boat - a method more commonly associated with people escaping war or genocide in Myanmar, Libya and Syria - has became the only option for some, particularly for the minority of Hong Kong protesters whose bail conditions required them to surrender their passports, according to people familiar with the matter.

Others who still have their passports have skipped bail and flown to Taiwan, Britain, Canada and elsewhere on tourist or other visas and are pursuing options that would grant them rights to live, work or study in those places.

The sea journey is perilous, with the possibility of capsizing, being captured by Chinese authorities, or running out of food or water, among other complications. People who have helped plan the journeys say many get seasick.

The Hong Kong marine police, who patrol the waters around the island, have sophisticated surveillance capabilities, generally deployed to combat the smuggling of drugs, meat and other contraband.

People familiar with the situation said that some arrested Hong Kong protesters have continued to head to Taiwan since the national security law took effect in July, despite a growing knowledge of these boat journeys among law enforcement agencies in Hong Kong and mainland China.

"Many people really want to take risks" after having their passports confiscated by Hong Kong police, said one person familiar with the arrangements, but have postponed plans to leave after they learned of the vessel's interception.

People arrange these boat journeys with help from contacts in Taiwan, including in the Taiwanese government, which ensures that the refugees are not immediately detained, according to three people familiar with the matter.

While Taiwan restricts travel because of the coronavirus pandemic, it has made exceptions through various channels for those fleeing persecution, these people say.

A person familiar with the Taiwan government's approach said Taiwan's Mainland Affairs Council, which deals with Hong Kong affairs, is willing to help quietly and has urged Hong Kong protesters to equally stay quiet, adopting a policy of "just do it, and keep your mouth shut."

On the day the boat was intercepted, the deputy minister of Taiwan's Mainland Affairs Council, Chiu Chui-Cheng, said at a news briefing that Taiwan supports Hong Kong's struggle for democracy and freedom but does not encourage the use of illegal channels to come to Taiwan.

The following day, Taiwan's China Times newspaper reported that a boat carrying five Hong Kong protesters had been assisted by Taiwanese authorities after running out of fuel near a group of Taiwanese-controlled islands in the South China Sea known as Pratas, or Dongsha. The five were transported to the southern Taiwan city of Kaohsiung and were not detained, the report said.

The Mainland Affairs Council said in an email that it believes the report may have been intended to harm those involved and declined to explain details of the case. It added that the government "has established a humanitarian assistance mechanism" to help those who meet certain conditions, but did not elaborate.

Taiwan has no formal refugee process for people entering from Hong Kong. In July, it opened an office to assist Hong Kong nationals wishing to relocate to Taiwan, citing an existing law allowing Taiwan to provide "necessary assistance" to "Hong Kong or Macao residents whose safety and liberty are immediately threatened for political reasons."

But Taiwan's government has been reluctant to publicize mechanisms for admitting Hong Kongers without work or student visas out of fear of compromising the safety of Hong Kong protesters and risking retaliation from Beijing. A person close to one of those on the boat seized Aug. 23 said his friend planned to escape to Taiwan in February, several months after he was arrested on a "serious charge" and tortured in custody by the Hong Kong police.

Amnesty International last year documented allegations that people arrested during last year's anti-government protests were beaten and tortured in custody. The Hong Kong police have said they respect the rights of people in custody and have declined to comment on individual cases.

The person familiar with the escapees' boat journey said arrangements had been made with someone in Taiwan who would receive the vessel on arrival.

"I want him back and happy like before," the person said of the friend, now in detention in mainland China. "I want to play and hang out again every day just like before."

Another person familiar with the case of Kok, the 19-year-old Hong Kong University student, said he was arrested and charged with rioting last November along with 12 others.

They were accused of trying to divert police attention away from Polytechnic University, a Hong Kong university campus that was the scene of a battle between police and protesters.

In a statement, the Hong Kong police said they have informed the detainees' family members in the city and "provided them channels of requesting assistance" from the Hong Kong government.

As of midday Monday, neither of the two suspects' families had been contacted by Hong Kong authorities or Chinese authorities, they said.

In an editorial, the China Daily, the Communist Party's English-language newspaper, said Hong Kong lawbreakers should "give up the illusion of evading justice by seeking shelter on [Taiwan] or elsewhere." (China says the national security law has global jurisdiction.)

"The central authorities are determined to implement the national security law to the letter and bring all who violate it to justice," the editorial added.