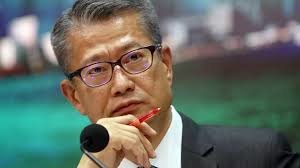 Hong Kong’s economy may take longer than expected to recover due to the fluidity of the local virus situation and global economic uncertainties, Financial Secretary Paul Chan said.
“Business and economic activities that have seen signs of recovery have been hit by the fresh wave of the virus,” Chan said in a blog post Sunday. He once again urged landlords to offer tenants rental concessions to ride out the impact.

The city is experiencing its worst wave of the coronavirus outbreak after returning to relative normalcy between mid-April and June. It has reported more than 100 local cases daily for the past four days, with almost half of unknown origin.

While the government has not mandated a full lockdown, it has introduced a ban on large gatherings and evening dine-in services, and has required mask-wearing in indoor public areas and transit.

The economy suffered a record contraction of 8.9% in the first quarter as the pandemic battered the city into deeper recession, compounding the fallout from its political crisis. The government is scheduled to release advance estimates for the second quarter on Wednesday.

“The economic situation in the second quarter is still very severe, but the state of contraction appears to have slowed down slightly, ” Chan said.
#Coronavirus
Add Comment