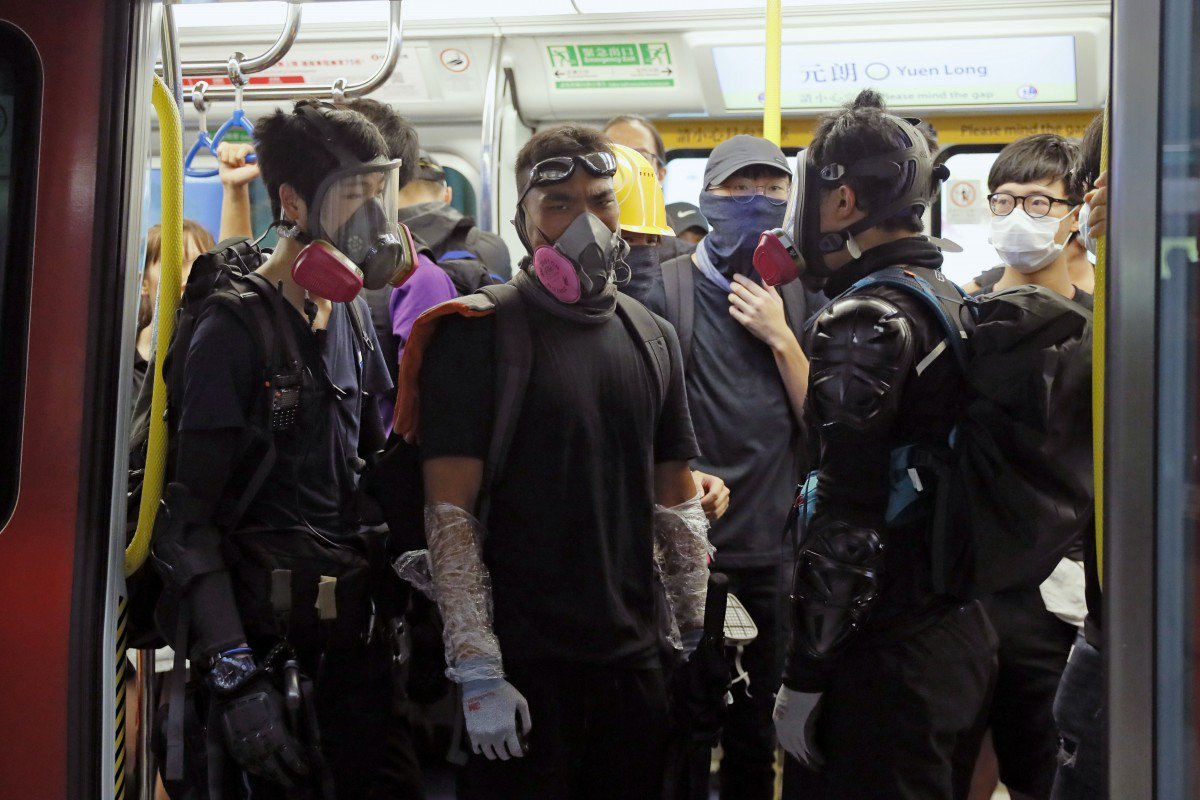 MTR Corporation announces it will shut stations without notice in case of violence. Operator had taken flak from state-owned media over perceived softly-softly approach to anti-government actions on its premises

Hong Kong’s embattled railway operator bowed to pressure on Thursday night to get tough on anti-government protesters, after Beijing expressed dismay at its “softly-softly” approach to dealing with their actions at train stations that had at times crippled services.

In a new move, the MTR Corporation announced that from now on, “if fights, vandalism or other acts of violence” occur, services could be stopped and the station immediately closed without notice.

“The police may need to enter stations to take suitable law enforcement when necessary,” it said in a late-night statement after it came under attack from state-owned media outlets.

Its chief executive, Jacob Kam Chak-pui, who took the helm in April, has come under intense scrutiny from the central government, according to a source familiar with the situation.

“Beijing is not happy with the overall performance of the MTR Corp in dealing with the protesters and the staff who are behind them,” the source said. “They think Kam has been too soft. He has come under tremendous pressure to keep the situation in check.”

On Thursday, mainland media fired a barrage of criticism at the firm – whose majority owner is the city government – for its perceived facilitation of the spread of violence by “black-clad rioters” at Yuen Long station the night before.

After thousands of protesters staged a peaceful sit-in at the station, against a pro-Beijing mob rampage at the same site a month earlier, smaller groups set off fire extinguishers in a late-night stand-off with riot police
. They set up barriers using rubbish bins and sand buckets, while police remained on the footbridge outside.

The MTR Corp halted train services at the station but arranged special trains to pick up people already there.

“The ‘black-clad people’ breached the law but they could still receive this ‘nice treatment’. What’s wrong with the MTR?” read a commentary on the website of the People’s Daily, a Communist Party mouthpiece.

“Any public organisations should place the legal interests of the public as top priority, otherwise they will betray their duties … Once they allow violence to spread, they are being irresponsible for the passengers and betraying public interests.”

Other pro-Beijing critics questioned why the rail operator turned a blind eye to protesters who jumped turnstiles to catch trains after the stand-off.

The MTR Corp said it would alter service arrangements if “the situation so merits to ensure the safety of MTR staff and passengers”, appealing for public understanding.

“Under safe circumstances, the corporation will continue to dispatch trains to pick up passengers who are stranded in stations as far as practicable,” it said.

“However, if fights, vandalism or other acts of violence occur, under emergency situations, operation and train service at the stations concerned may be immediately stopped, and/or the station will be closed, without prior notice. The police may need to enter stations to take suitable law enforcement when necessary,” it said.

Beijing has started to tighten its grip on local conglomerates over their stance towards the protests. On August 9, the Civil Aviation Administration of China (CAAC) issued a major safety warning to Cathay Pacific Airways, and demanded the airline submit crew lists for all flights going over mainland airspace, saying crew members who supported the protests would be barred from flying.

The pressure prompted the carrier to sack pilots and ground staff involved in the turmoil. Its CEO Rupert Hogg and his deputy Paul Loo Kar-pui resigned.

The source said so far Beijing had not requested the MTR Corp sack staff believed to support the protesters. “But after the district council elections in November, there will be a political purge at the MTR and other public organisations,” the source said.

Lawmaker Michael Tien Puk-sun, a former chairman of the Kowloon-Canton Railway Corporation, said Kam was not appointed to handle political issues, but to manage rail services and other business operations.

“I am not surprised that Beijing has exerted pressure on him. But I would feel pity for him as he was not hired to handle political events. You can’t change the CEO very often … No wonder when I saw him earlier he looked dispirited,” he said.

“I think he is caught in the middle between hawks and doves. The MTR is a public service operator. He needs to take care of the feelings of the city’s passengers and its public image. If the MTR gets tough on the protesters, it may turn people off.”