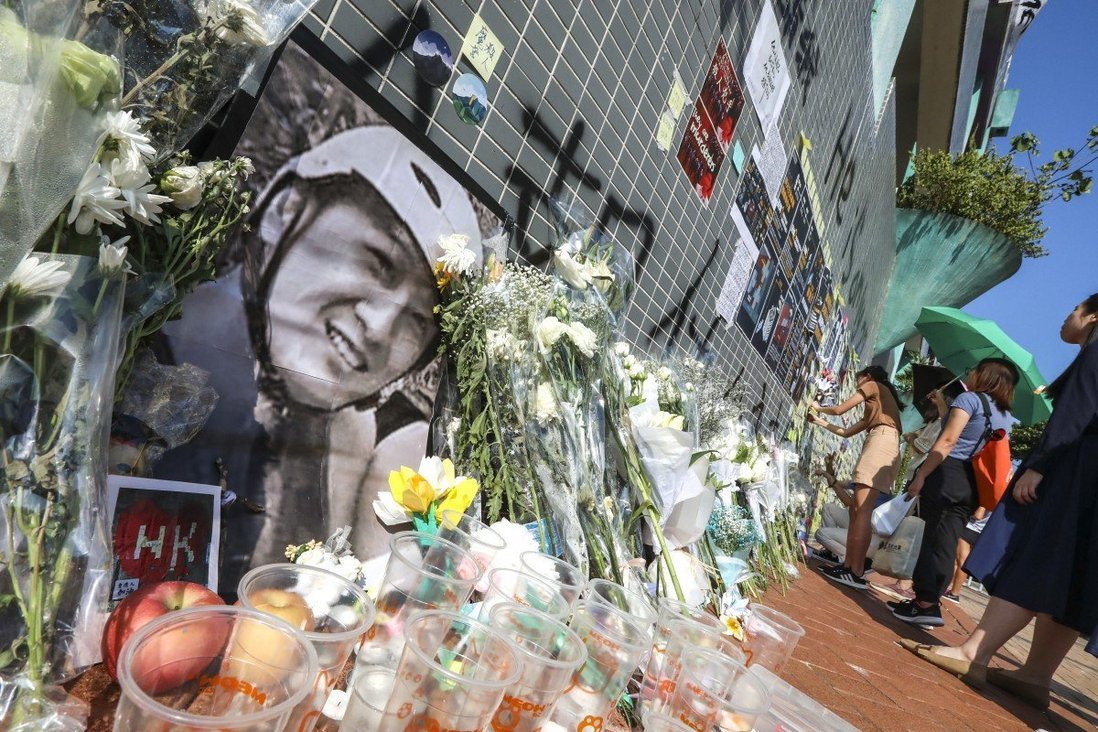 An inquest jury has reached an open verdict on the death of a Hong Kong student who fell inside a car park near a protest two years ago, as they were unable to determine whether the case was an accident or homicide.

Saturday’s majority verdict of 4-1 followed two days of closed-door deliberations by the five-member panel at the Coroner’s Court, marking the end of a five-week inquiry over the youth’s demise, which grabbed international headlines and stirred further tensions in a city already gripped by months of social unrest in 2019.

That ruling implies most of the jurors were unable to accept investigators’ conclusion that Alex Chow Tsz-lok plunged four metres to his death on the second floor of the Sheung Tak Estate car park in Tseung Kwan O by leaping over the edge of the floor above, mistakenly believing there was a ledge behind it.

Neither were they satisfied that the 22-year-old was assaulted and tossed out of the multistorey building in the early morning of November 4, 2019.

Coroner Ko Wai-hung expressed regret in his closing remarks, saying the jury might have arrived at a definitive judgment had security cameras at the scene captured the incident at a better angle or timing. 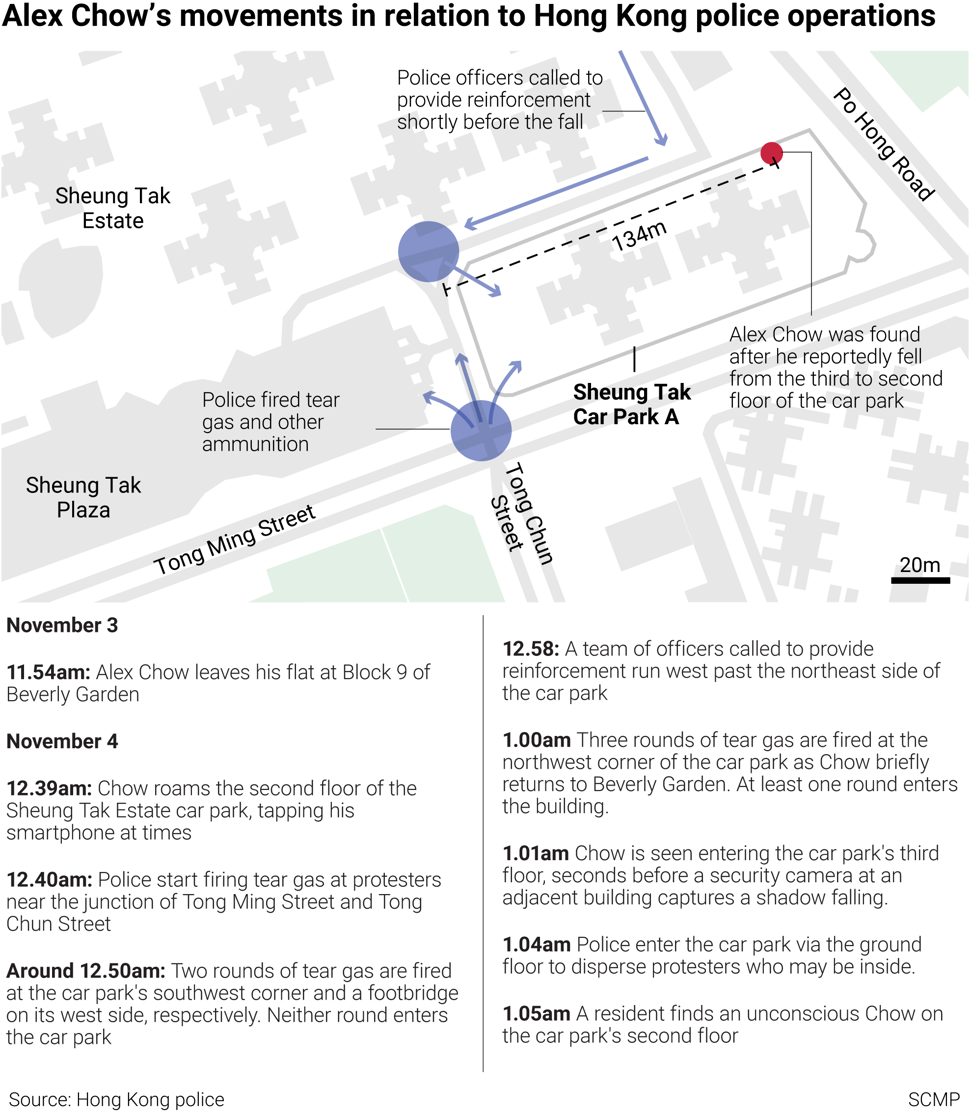 Chow, a Year Three computer science undergraduate at the University of Science and Technology, was found unconscious when a police clearance operation was under way at a nearby junction. He died of severe head injuries four days later in hospital.

Revolving security cameras on the third floor lost track of him eight seconds before the fall, as they had shifted focus to the opposite side of the car park.

Another camera at a nearby housing estate, which captured the moment of the fall, was not wide enough to show events immediately beforehand.

“I think we have almost arrived at the truth. Had [the security camera which captured Chow’s fall] moved up by five degrees, or had [the revolving camera on the car park’s third floor] moved at a slower speed, the truth would have surfaced,” Ko said.

Ko also offered his condolences to Chow’s parents, adding: “Whenever the court deals with cases involving a young person’s passing like that of Tsz-lok, who was young and capable, the court feels very sad and troubled … I hope time is able to heal your pain.”

The coroner exempted the five jurors from taking part in jury trials for the next eight years in light of their service in the present case.

Chow’s father, Chow Tak-ming, said the verdict was “respectable”, adding the family had not decided whether to pursue civil lawsuits in the future.

“I want to tell my son: we have tried our best [to find] the truth,” he said in tears. “We were a fraction away from the truth … In my remaining years, I hope the truth will emerge.” 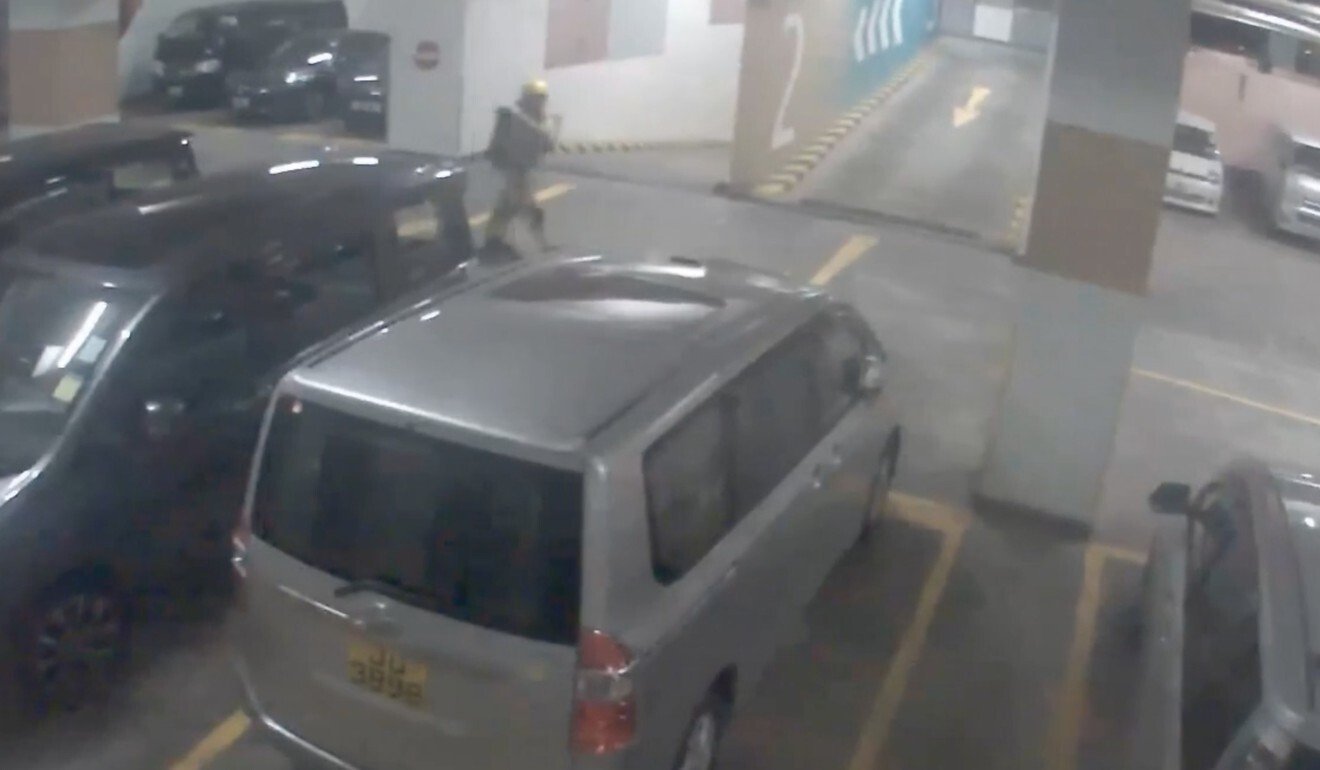 The jury suggested the car park should replace revolving CCTV cameras with stationary ones, and that railings should be installed on the edge of the third floor to minimise the risk of an accident.

The open verdict followed a similar ruling last year on the mysterious death of 15-year-old Chan Yin-lam, whose naked body was found in the sea in September 2019.

Both cases were rife with unsubstantiated rumours and conspiracy theories at a time when critics accused police of using violence against protesters.

Sceptics have suggested Chow was the victim of a premeditated assault, with the perpetrator throwing him out of the building while leaving no trace at the scene.

Before the verdict, Ko told jurors the only court evidence that could support a possible homicide was that Chow was knocked unconscious by a flat, hard object on his right forehead, before the assailant threw him out of the building and caused him to sustain identical injuries.

That would be highly coincidental, the coroner said, noting the lack of defensive wounds on Chow’s body, no signs of a fight at the scene, and no security footage showing the presence of a potential suspect inside the car park.

Instead, Ko said the jury could rule Chow plunged to his death by accident if they found it was relatively likely he had leaped over a 1.2-metre-tall wall on the third floor mistakenly believing there was cover behind it. Only if the jury failed to arrive at either of the conclusions should they consider delivering an open verdict. 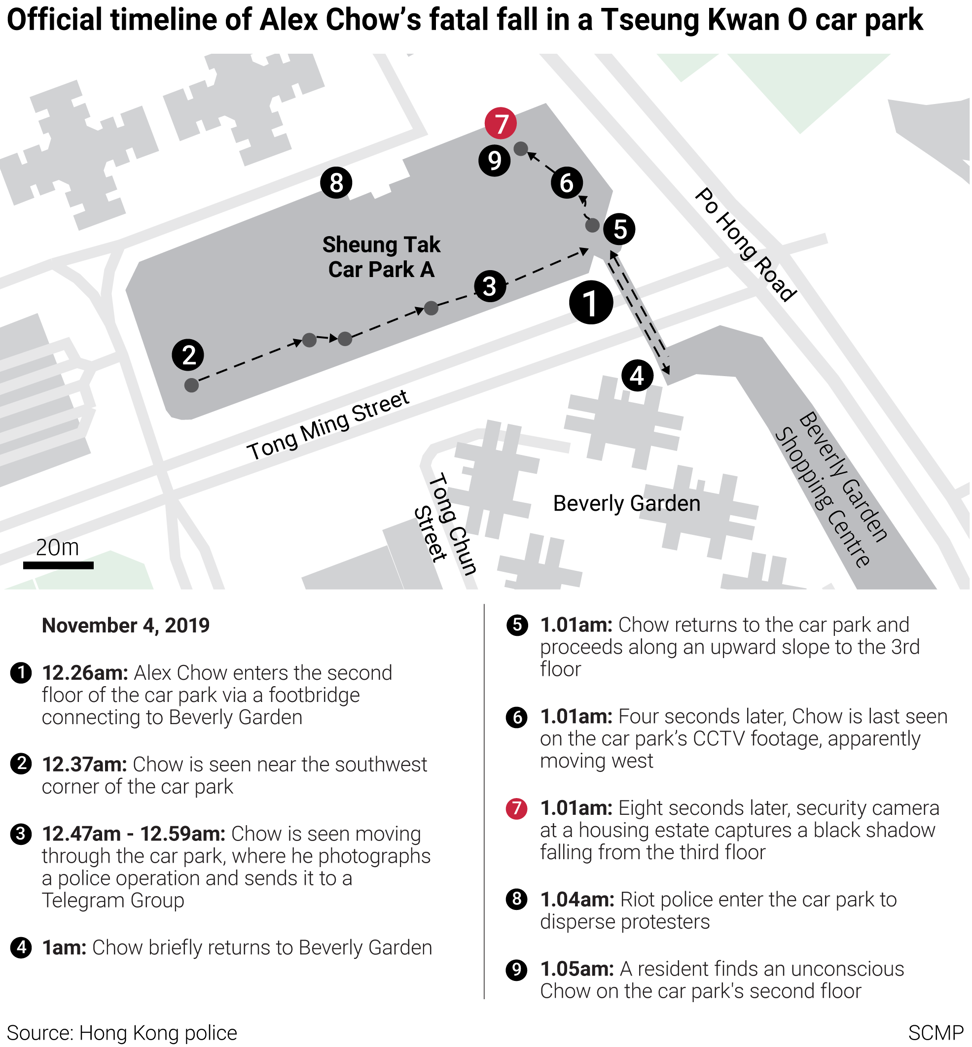 A police lawyer pressed ahead with the conclusion of an accidental death at the inquest, saying it was the only reasonable ruling based on evidence, but Chow’s family lawyer called the claim “baseless”.

Chow’s death sparked further demonstrations and accusations against police, and even prompted radicals to plot a bomb attack during a monthly vigil at the car park to mourn his death.

Critics have questioned whether police obstructed or delayed Chow’s treatment while dispersing protesters at a nearby demonstration. Some also suggested he might have jumped from the building either to escape tear gas being fired, or because he was being chased by officers.

In his summary of the investigation, Ko found no basis to suggest Chow had taken part in the protest that night, or had been affected by tear gas fired by police 134 metres away from the fall.

There were also no signs officers had come into contact with Chow or obstructed paramedics in saving him. Instead, security footage at the car park suggested he was acting alone shortly before the mishap.

Witnesses and political analysts found it unlikely the inquiry could mend the sharp divide in society opened up by the unrest.

Tseung Kwan O resident Ricky Mung Wai-kit, who witnessed paramedics trying to save Chow and volunteered to give evidence at the hearing, said the inquest had provided explanations on the perceived lateness of rescue services. 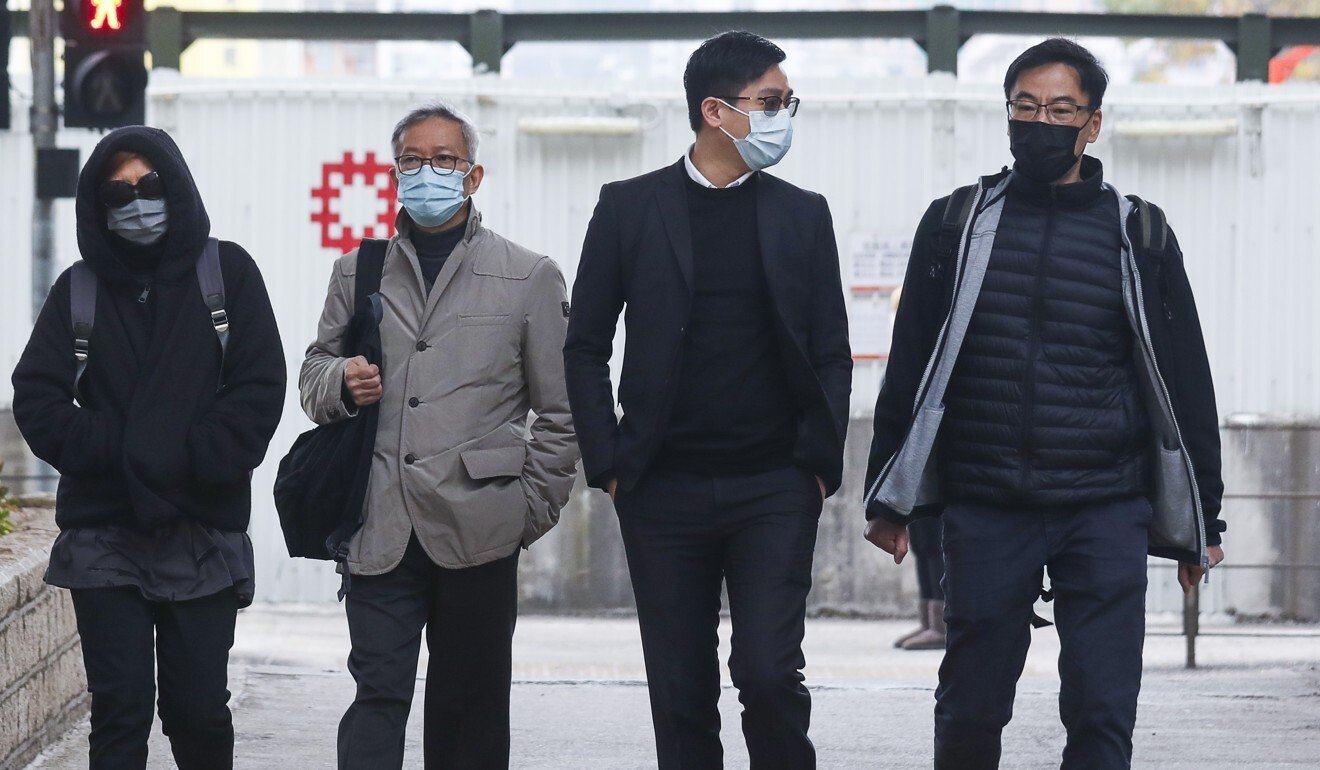 But Mung said the hearing could “do nothing” to resolve the conflicts in an already polarised society.

“[The political divide] is not something that can be resolved by one or two cases,” he said.

Form Six student Casper Tsang Long-hin, a first aid volunteer who went to help Chow, said the inquest made him angrier at police investigators, who failed to find video footage of Chow’s fall.

The coroner unearthed previously unseen visuals midway through the inquest when he went through evidence discarded by investigators. He described the footage as “extremely important” as it was the only piece of direct evidence on the time and location of the fall.

Tsang, who also gave evidence at the inquest, said: “Did police give their utmost effort in the investigation?”

Edmund Cheng Wai, a public policy scholar at City University, said while the inquest might help tackle misinformation generated in the early stage of the investigation the Coroner’s Court was not designed to deal with political issues.

“At a time where people simply want an answer to a yes-no question and hold someone accountable, this legal framework can hardly resolve the issues that have beleaguered society,” he added. 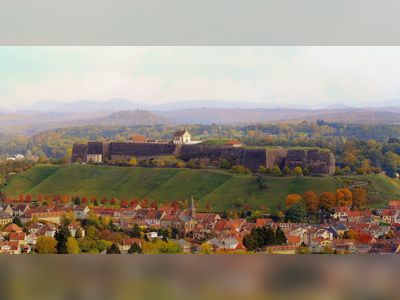