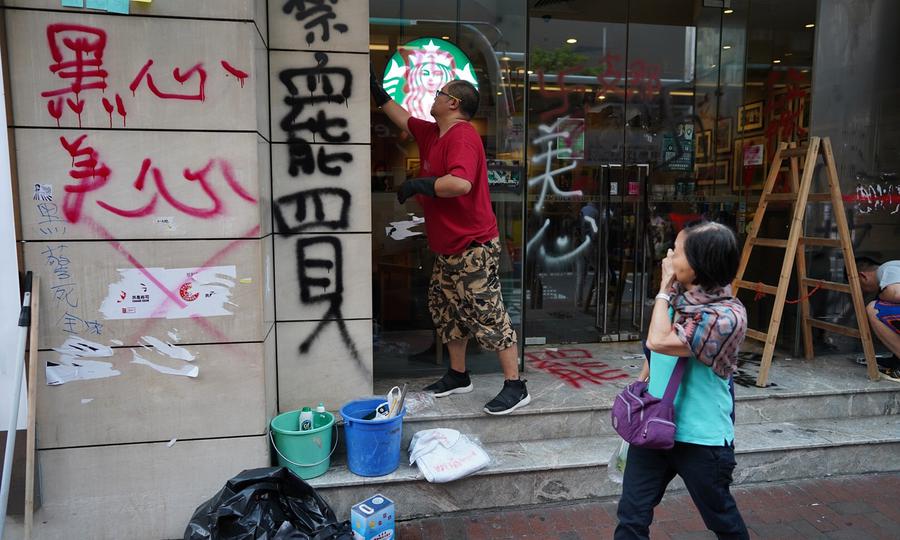 Starbucks, Yoshinoya noodle chain, Genki Sushi, Bank of China branches tagged with graffiti after Cathay Pacific hit from the other side

Brand name companies that have been targeted for taking sides in the Hong Kong protests are hurting.

Starbucks has emerged as the latest brand to fall foul of Hong Kong’s pro-democracy protesters after a family member of the restaurant chain that owns the local franchise spoke out against demonstrators.

Multiple branches were covered with graffiti over the weekend as the city witnessed some of the most intense clashes between hardcore protesters and riot police in weeks.

One cafe in the district of Wanchai was daubed with slogans saying “boycott,” as well as insults to the police and Maxim’s Caterers – the major Hong Kong restaurant chain that runs Starbucks outlets in the city.

The vandalism illustrates the huge pressures on international brands as Hong Kong is shaken by its worst political unrest in decades.

Beijing is piling pressure on businesses to publicly condemn the protests.

Those that do so risk protester backlash, but staying silent risks financial punishment on the mainland – a far more lucrative market.

The boycott campaign against Maxim’s snowballed after Annie Wu, the daughter of Maxim’s wealthy founder, delivered a speech earlier this month in which she condemned the protests and said Beijing’s hardline stance against democracy advocates should be supported.

She was speaking at the UN’s human rights council in Geneva alongside Pansy Ho, a billionaire casino magnate who made similar calls.

Their comments were seized on by protesters and portrayed as an example of how Hong Kong’s wealthy elite are out of touch with public sentiment and in the pockets of Beijing.

Prominent democracy campaigner Joshua Wong was among those calling for a boycott of Starbucks, and more than 50,000 people have signed a petition asking the Seattle-headquartered company to sever ties with Maxim’s.

“We herein urge the Board of Directors to consider whether Maxim’s truly represents the social values of Starbucks and terminate the franchise to Maxim’s immediately,” Wong wrote on Twitter on Friday.

Asked for comment, Maxim’s sent a statement dated 25 September in which it said Wu “is not employed in any position or capacity at the company”.

It also added that it was “deeply concerned about the safety of our frontline team due to the incidents happened at our outlets.”

Other major brands have been rounded on by protesters — either for pro-Beijing comments made by owners or because the owners themselves are linked to the Communist Party in China.

Yoshinoya, a popular noodle chain, and Genki Sushi – also run by Maxim’s – have been repeatedly tagged with graffiti, along with Bank of China branches.

Brands deemed to be sympathetic to protesters have also had a torrid time and faced boycotts on the mainland.

Authorities in China tore into Cathay Pacific after staff joined protests, forcing the company to go through stricter regulatory checks.

The moves led to major staff changes on Cathay’s board – including the resignation of its CEO.

The Hong Kong-based airline has had a torrid few weeks after Chinese state media and authorities blasted the company because some of its 27,000 employees had taken part in – or were sympathetic to – anti-government protesters.

China’s aviation regulator barred staff supporting protests from working on flights to the mainland or traveling through its airspace, setting off chaos inside the company as it frantically tried to win back Beijing’s favor.

Both the airline’s CEO and Chairman made surprise departures as bosses issued repeated warnings to staff not to take part in the protests currently engulfing the financial hub.

In recent weeks staff have described deleting their social media accounts, fearful that colleagues might inform on them, while Cathay announced it had sacked multiple staff linked to the protests.

On Monday, a group of former employees held a press conference alongside officials from the Hong Kong Cabin Crew Confederation and flight attendant unions.

They said at least 26 people had been fired from Cathay in protest-linked terminations.

Hiding their identities behind sunglasses and face masks, they described summary firings, often after being shown screen grabs of their Facebook and other social media posts.

“It’s regrettable to see Cathay Pacific encouraging staff to report and criticize [others] internally,” one woman, who gave her first name as Jackie, told reporters. “The situation is just like in the Cultural Revolution.”

“Some crew were shown posts and updates on their private social media accounts and required to provide an explanation with evidence. Others were handed termination letters without any accusations,” she added.

One woman, who gave her name as Chris, tearfully described human resources asking her to explain three screenshots, one of which offered an opinion on the protests.

She said she was initially suspended and then fired.

“I wasn’t given any explanation. I was just escorted out of the office. I was very furious and devastated,” she said.

In a statement, Cathay said it had to abide by all regulations placed on it in any jurisdictions where it operates, “including those prescribed by the authorities in mainland China.”

“We will ensure 100 percent compliance with all our regulatory duties. Quite simply, this is our license to operate; there is no ground for compromise,” the airline added.

The protests have also hit Cathay’s bottom line with August passenger numbers down 11.3 percent on last year, inbound Hong Kong traffic down 38 percent and outbound down 12 percent year-on-year, the biggest falls in a decade.

Beijing’s crackdown on Cathay has heightened fears among many Hong Kongers that the city’s free speech laws are increasingly under threat – particularly within any company that does business on the authoritarian mainland.