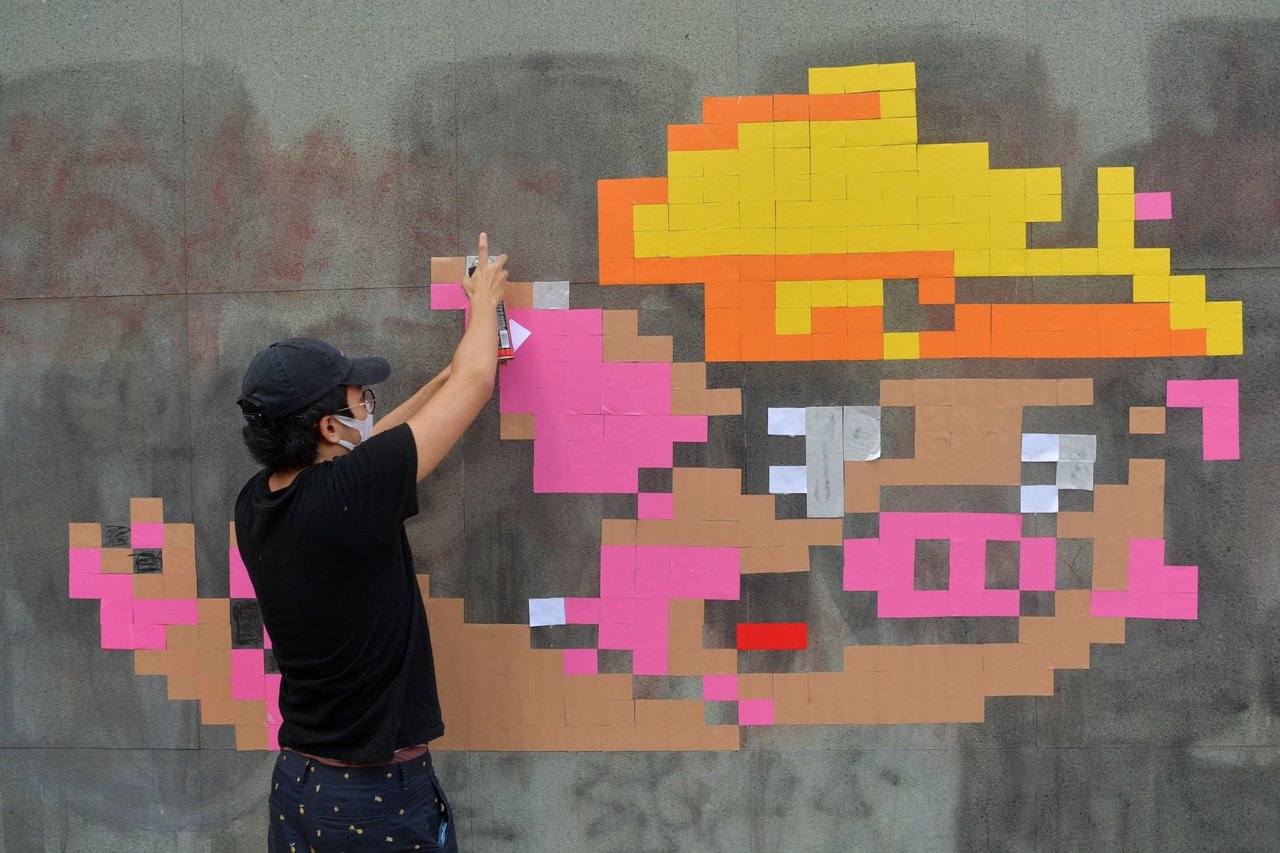 Hong Kong protesters were rebuilding “Lennon Walls” of anti-government graffiti on Saturday as they marked the fifth anniversary of the “Umbrella” pro-democracy movement that gridlocked the territory for weeks.

A series of pro- and anti-Beijing protests is planned for the Chinese-ruled city ahead of the 70th anniversary of the People’s Republic of China on Tuesday, including at the consulate of former colonial power Britain.

“They are not our children,” China supporter Yau Mei-kwang said of the frontline activists. “Because at this age, they should be studying, not running to the airport, hitting people, hitting the police, insulting people. That is not right.”

A pro-democracy protester at one Lennon Wall who only gave his name as Wong defended the use of violence.

“We know that they will not listen if we rally in peace because we are not on the same level,” he said.

Some Lennon Walls were torn down by pro-Beijing activists last weekend. The large mosaics of Post-it notes calling for democracy have cropped up in underpasses, outside shopping centres, at bus stops and universities and outside the Legislative Council.

The anti-government protesters are angry about what they see as creeping Chinese interference in Hong Kong, which returned to China in 1997 under a “one country, two systems” formula guaranteeing freedoms that are not enjoyed on the mainland.

China dismisses the accusation. It has accused foreign governments, including the United States and Britain, of fanning anti-China sentiment.

‘NOT SURE WHEN PROTEST WILL END’

“I am not sure when this protest will end. Either we win or we lose. But aslong as we are united and fight, generation after generation, we can achieve democracy.”

Protesters appealed to the British two weeks ago to rein in China and ensure it respects the city’s freedoms. They plan to do so again on Tuesday.

Britain says it has a legal responsibility to ensure China abides by the 1984 Sino-British Joint Declaration, which lays out the “one country, two systems” arrangement.

At the same time, it is pinning its hopes on closer trade and investment cooperation with China, which since 1997 has risen to become the world’s second-largest economy, after it leaves the European Union at the end of October.

The protests were sparked in June by planned legislation, since withdrawn, that would have allowed the extradition of suspected criminals to mainland China. But they have since expanded into a broader pro-democracy movement.

The student-led Umbrella protests that gridlocked the city for 79 days 2014 failed to wrest concessions from Beijing.

One of the leaders of those protests, the bespectacled Joshua Wong, 22, said on Saturday he will run for local district council elections in November.

“It’s time to let Emperor Xi (Chinese President Xi Jinping) be aware that now is our battle,” he told reporters. ”...We stand in solidarity, we stand as one.

The U.S. Congressional-Executive Commission on China marked the Umbrella anniversary with a statement denouncing the “accelerated erosion” of Hong Kong’s autonomy.

“We call on the Hong Kong government to make the selection of the Chief Executive and the election of all members of the Legislative Council by universal suffrage a priority and take concrete steps to strengthen Hong Kong’s autonomy,” it said.

Dan Garrett, a U.S. academic who gave evidence before the commission, said on Twitter he was not allowed to land in Hong Kong on Thursday for the first time in 20 years of visiting and living in the territory.

Various protests are expected on Saturday and Sunday, but the biggest are likely to be on Tuesday, marking the Oct. 1 anniversary of the founding of the People’s Republic of China in 1949.

Activists plan a mass rally from Victoria Park in the bustling Causeway Bay district to Chater Garden, a cricket pitch back in colonial days, in downtown Central.

Official festivities for National Day have been scaled back, with authorities keen to avoid embarrassing Beijing at a time when Xi is seeking to project an image of national strength and unity.