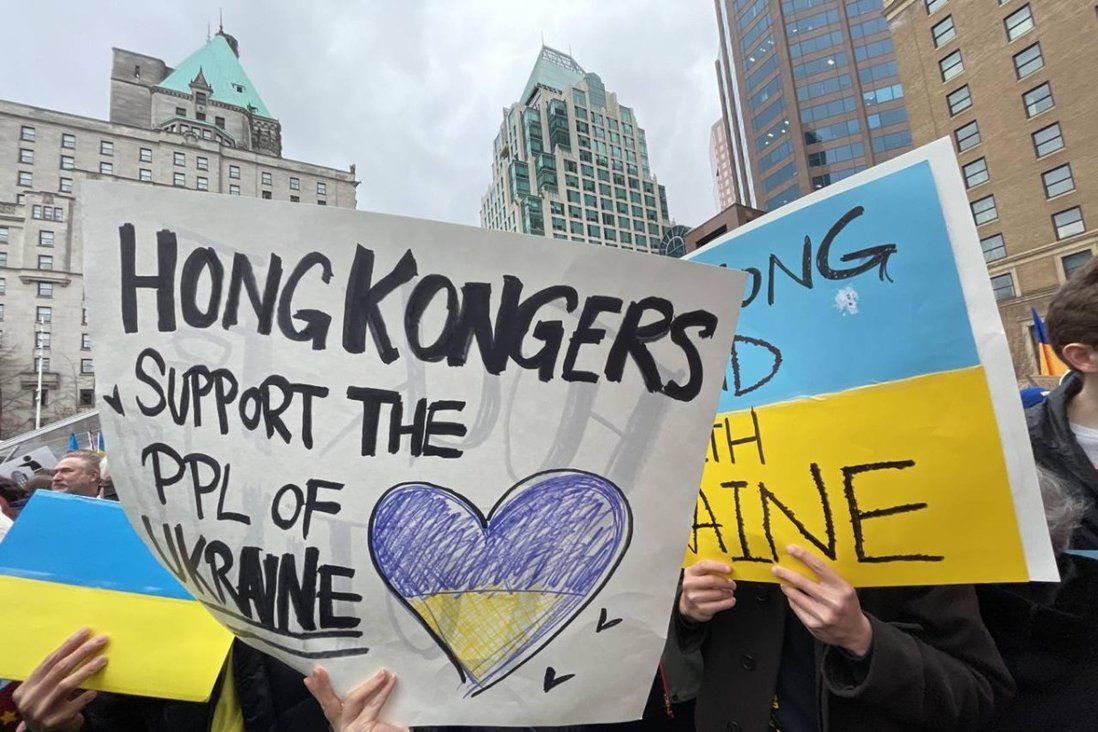 Hong Kong protesters around the world embrace Ukraine’s cause

Activists whose efforts were largely thwarted in Hong Kong say they feel natural kinship with Ukrainians, whose Maidan protests were a source of inspiration. Some have even travelled to Ukraine to help.

On February 24, Hong Kong immigrant Fermi Wong Wai-fun caught a bus from her new home in Bristol, England, bound for a protest in London’s embassy district.

Wong, a veteran of Hong Kong’s protest movement, had moved to Britain in late 2020 amid fears of being targeted by authorities for her activism.

But her destination last month was not China’s embassy – it was Russia’s.

She said watching news of the Russian invasion of Ukraine that began that day had triggered a familiar sense of outrage. “It is very strange. I almost feel like I am Ukrainian … the feeling is as if it was happening in Hong Kong,” said Wong, a social worker. 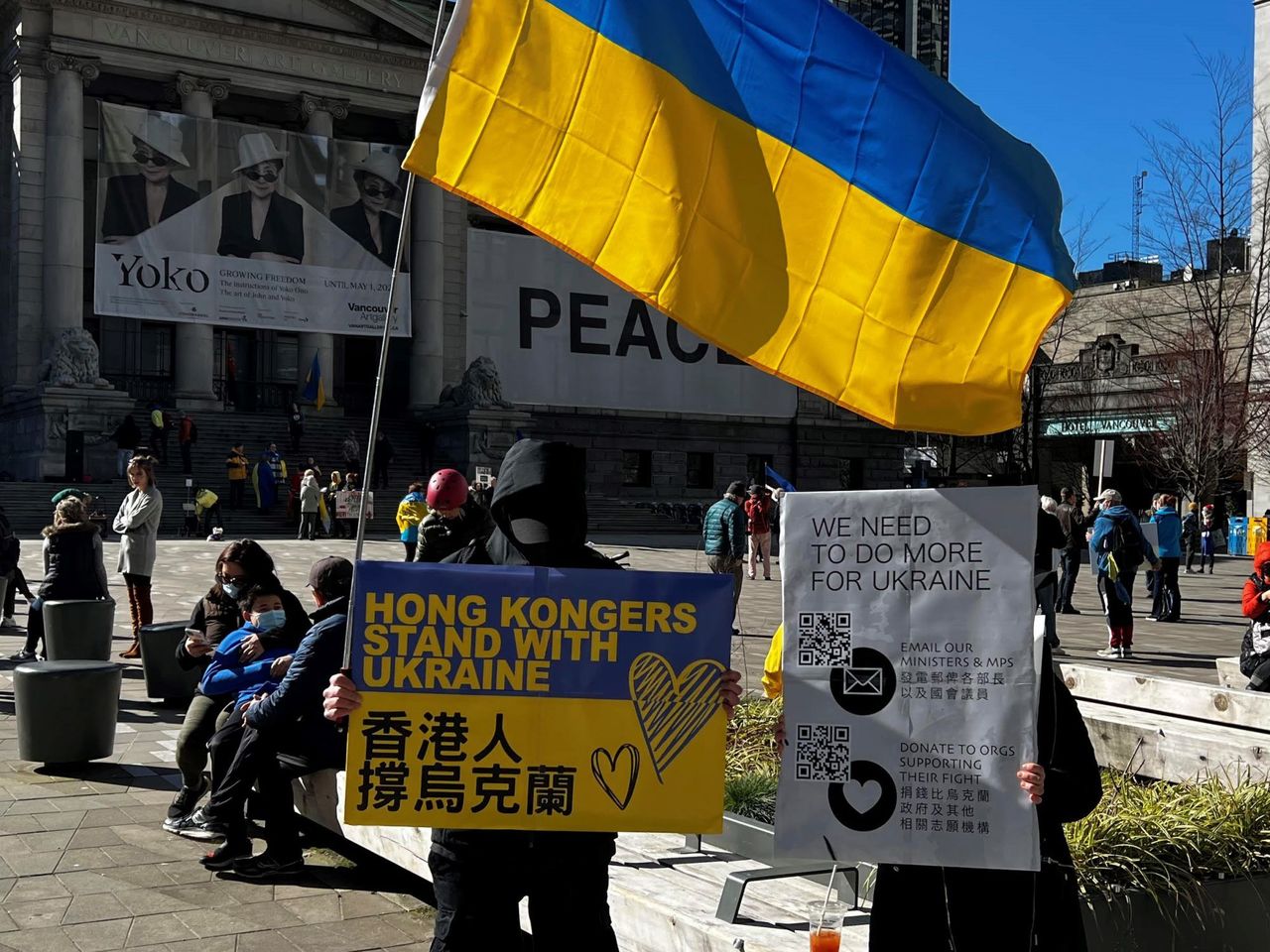 Hong Kong protesters join a rally against Russia’s invasion of Ukraine in Vancouver, Canada, on February 26.

Hong Kong activists around the world – from London to Vancouver, Sydney and Washington – have embraced Ukraine’s cause, attending rallies, raising money or even travelling to Ukraine to offer humanitarian aid.

They include recent immigrants from Hong Kong, like Wong, who see their support for the embattled country as a logical extension of their rejection of authoritarianism.

Such protests have also become an outlet for Hong Kong diaspora activists, whose ambitions for their own home city were largely thwarted in 2020 when Chinese authorities imposed a national security law on Hong Kong that criminalises acts of secession, subversion of state power, terrorism and foreign interference.

“We are connected because we are both facing a dictatorship [that] wants to smash, eliminate democracy. Ukrainians are like Hong Kong people, they want to protect democracy, or at least maintain their way of life,” said Wong.

But the alliance has historical roots too. These date back to Hong Kong’s “umbrella movement” and the Occupy Central protests of 2014, which drew inspiration from Ukraine’s Maidan protests that helped oust the country’s former pro-Russian government.

At the time, Chinese state media recognised the connection, with the Global Times newspaper warning that “Hong Kong could sink into the likes of Ukraine” if protesters had their way.

Hong Kong protesters looked to Ukraine again in 2019, during massive protests that began as a rejection of a law to allow extradition of Hong Kong people to mainland China, then expanded to a more broadly anti-government movement that demanded greater democratic rights.

Winter on Fire, a documentary about the Maidan upraising, became profoundly influential as a source of motivation and tactics, said activists, with numerous open-air screenings staged across Hong Kong during the protests. 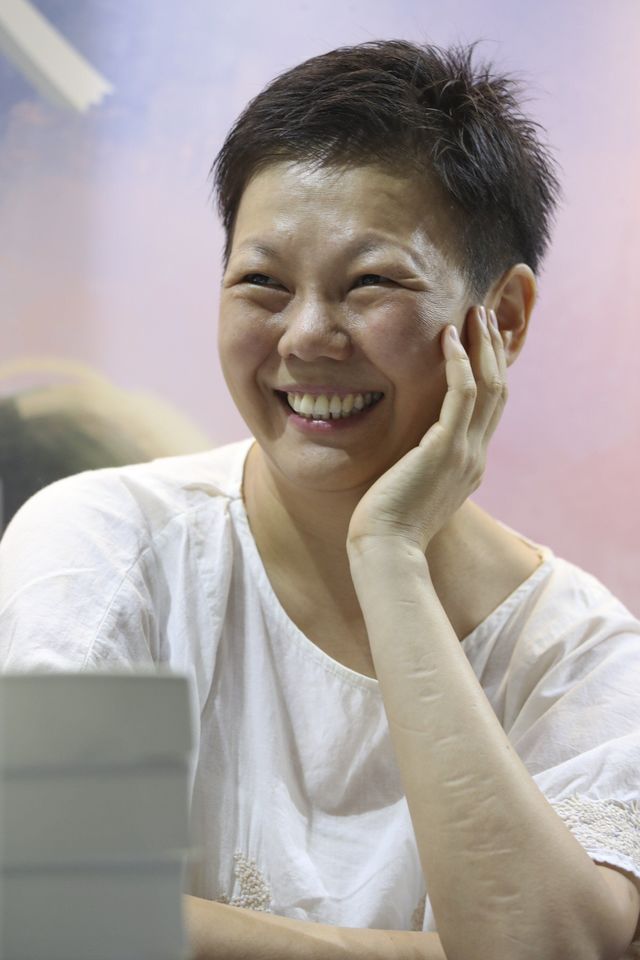 Social worker Fermi Wong Wai-fun, who moved to Britain in 2020.

Alliance Canada Hong Kong, an Ottawa-based group that has supported the Hong Kong protest movement, has been lobbying for Canadian government action in support of Ukraine and against Russia.

“There was something inspiring for Hongkongers, in the Euromaidan protests and their success. It was truly captivating,” she said.

‘We were already set up and ready to go’

While Hong Kong activists’ current embrace of Ukraine has largely been organic, there has also been some international coordination.

For example, this month 11 British-based Hong Kong Organisations jointly issued a letter calling for the UK government to grant visa waivers to Ukrainians seeking refuge. But the letter was coordinated by the Washington-based Campaign for Hong Kong.

Samuel Chu is president of the campaign, which advocates for the Hong Kong pro-democracy movement. It has also recently been lobbying Western governments to support Ukraine and Ukrainians overseas and coordinating donations for aid groups.

It was unsurprising that Hongkongers had rallied to Ukraine’s cause, said Chu, because “the staunchest defenders of democracy are people who have had it taken away”.

The same kind of policies that emerged in Western countries in response to Hong Kong’s protest movement, such as sanctions and immigration measures, could be applied to Ukraine and elsewhere, said Chu. 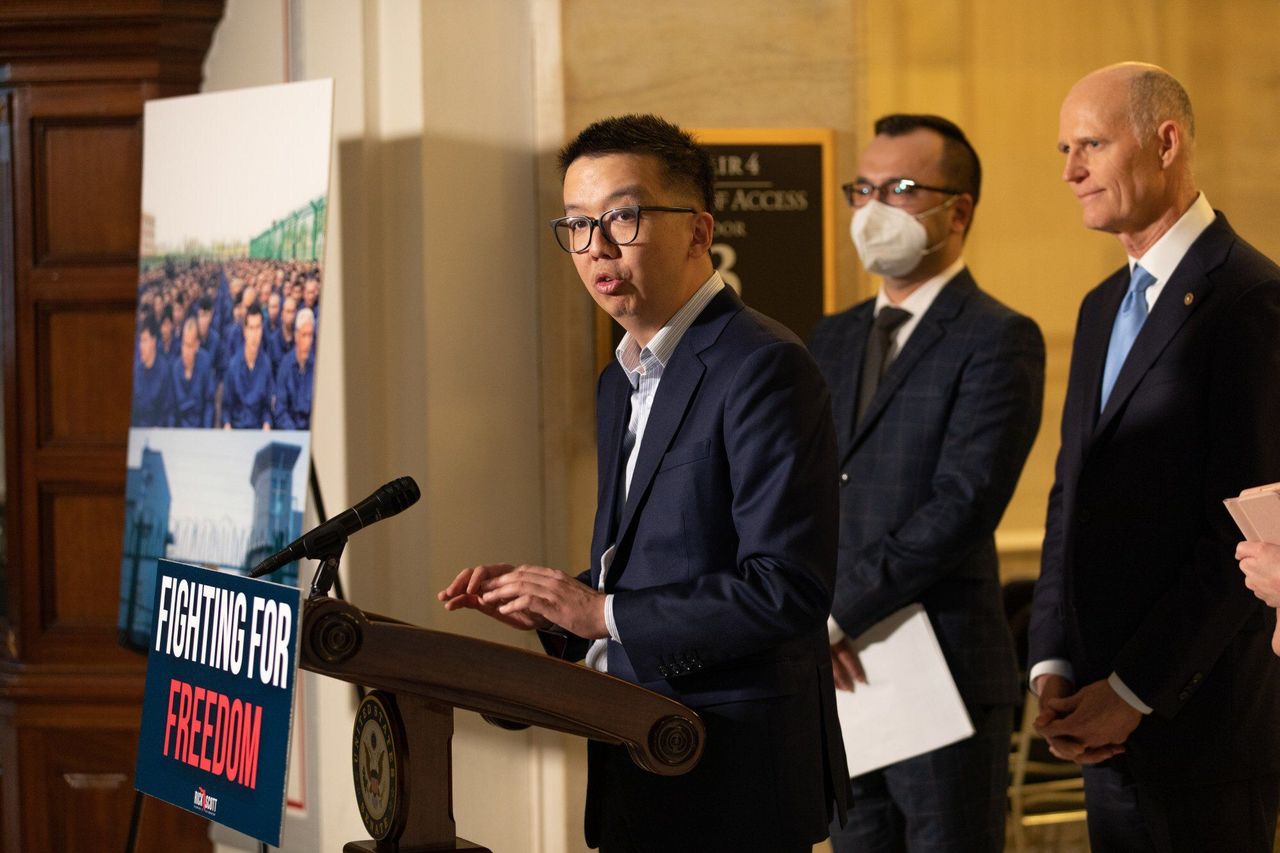 Samuel Chu is president of the Washington-based Campaign For Hong Kong.

And the Hong Kong protest movement had pre-existing “tactical” infrastructure – social media, advocacy groups, contacts and a willingness to protest – that allowed it to “spring into action” and push for such measures when Russia invaded Ukraine.

“We were already set up and ready to go,” Chu said.

China has not explicitly condemned Russia’s invasion of Ukraine, and in a meeting this week, US National Security Adviser Jake Sullivan told China’s top diplomat, Yang Jiechi, that China would face “significant consequences” if it gave Russia military or other help.

Chu said there was a “political awareness” that China was watching the situation unfold in Ukraine and calculating what oppositional efforts the rest of the world was capable of mustering should it, say, make a move on Taiwan. “So in that sense it is very much related,” said Chu.

In 2019, four far-right Ukrainian activists travelled to Hong Kong to take part in protests. They included a former head of a branch of the National Corps party, which the US State Department categorises as a “nationalist hate group”, and two members of the Azov Battalion, which critics say has a neo-Nazi ideology.

The group joined an authorised protest in December 2019 that descended into sporadic confrontations with police in Mong Kok and Whampoa. The Ukrainians posed for photos on social media in front of riot police and a burning train station.

At the time, their presence sparked concerns it might delegitimise the Hong Kong protest movement.

But for the most part, Hongkongers felt “deep appreciation” for global support that the 2019 protest movement received, said Chu.

“There’s a sense that the world came to stand with us so we should stand with them,” he said.

Some have gone all the way to Ukraine to return the favour.

Members of the England Good Neighbour Church, a registered charity set up in Bristol by recent Hong Kong immigrants, has sent a small team of workers to Ukraine to help fleeing refugees. 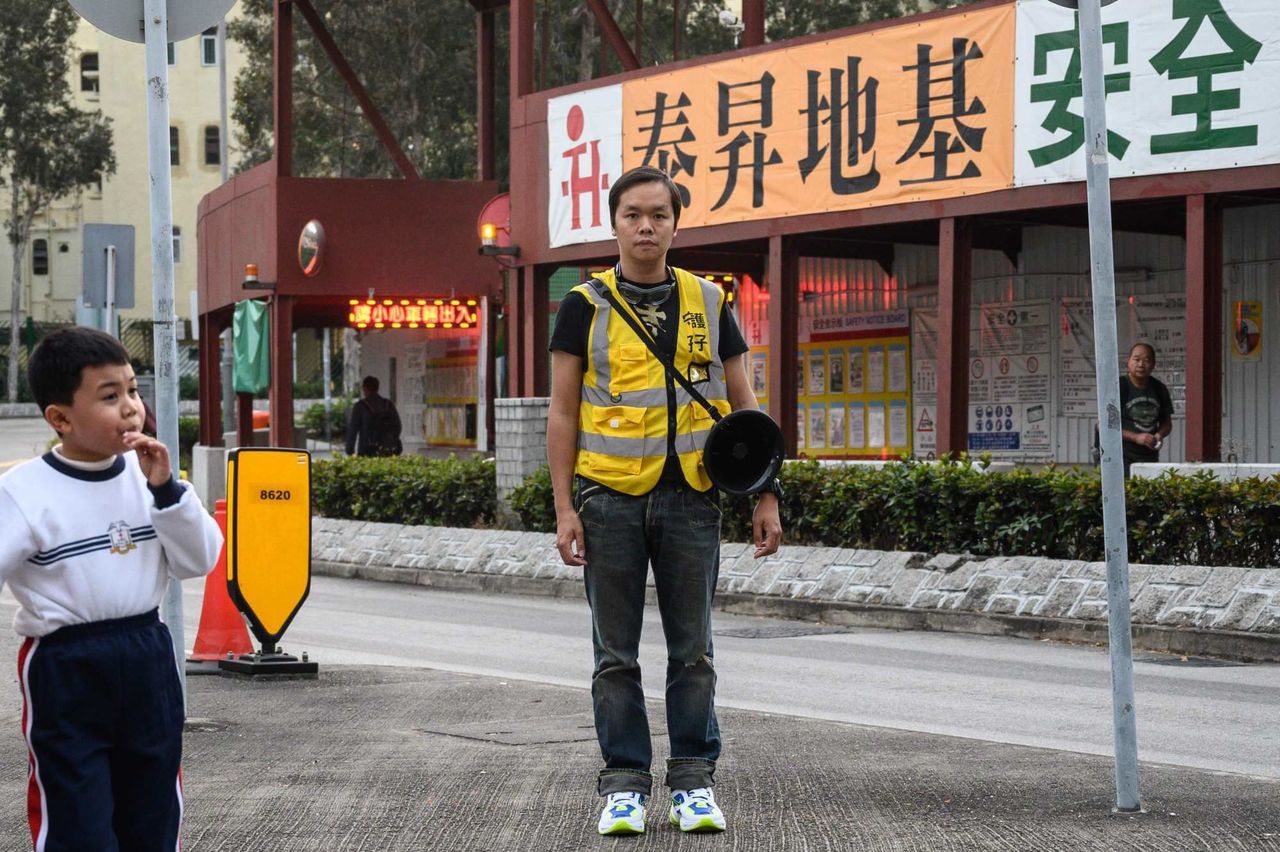 This picture taken on January 9, 2020, shows pastor Roy Chan outside Good Neighbour North District Church in Hong Kong. He has since moved to Britain, and is currently in Ukraine on a private humanitarian mission.

Its pastor is Roy Chan, who moved to Britain in 2020 amid accusations of money laundering by Hong Kong police that were widely seen as political retaliation against his protest-related activities.

Its pastor is Roy Chan, who moved to Britain in 2020 amid accusations of money laundering by Hong Kong police that were widely seen as political retaliation against his protest-related activities.

Chan wrote on Instagram last week that he and others had entered Ukraine on March 8, where they were stopped by police in the northwestern city of Lutsk.

Chan wrote that he had had “unpleasant experiences” at police stations in Hong Kong. “But this time, as [the Ukrainian police] realised we were from Hong Kong, we started speaking the same language: say no to totalitarianism!” wrote Chan.

Chan shared photos of Good Neighbour volunteers on the Polish side of the border cleaning refugee centres and driving refugees to their host families.

Wong, who has attended Good Neighbour church but now worships elsewhere, said her support for Ukraine was out of natural sympathy but was also “very much the China factor”.

On February 24, as she waved her handmade placard saying “Support Ukraine”, and shouted for Russia to withdraw its troops, her thoughts were also on Taiwan.

“Is it possible to say that we want to support Ukrainians just because we support democracy, and it has nothing to do with China? It’s very difficult to differentiate,” said Wong.

“You ask me, my friends? We’re all very angry that China is supporting Russia … we worry, what if they join together? What if they win? It’s not just a problem for Hong Kong or Taiwan. It’s the whole world.”