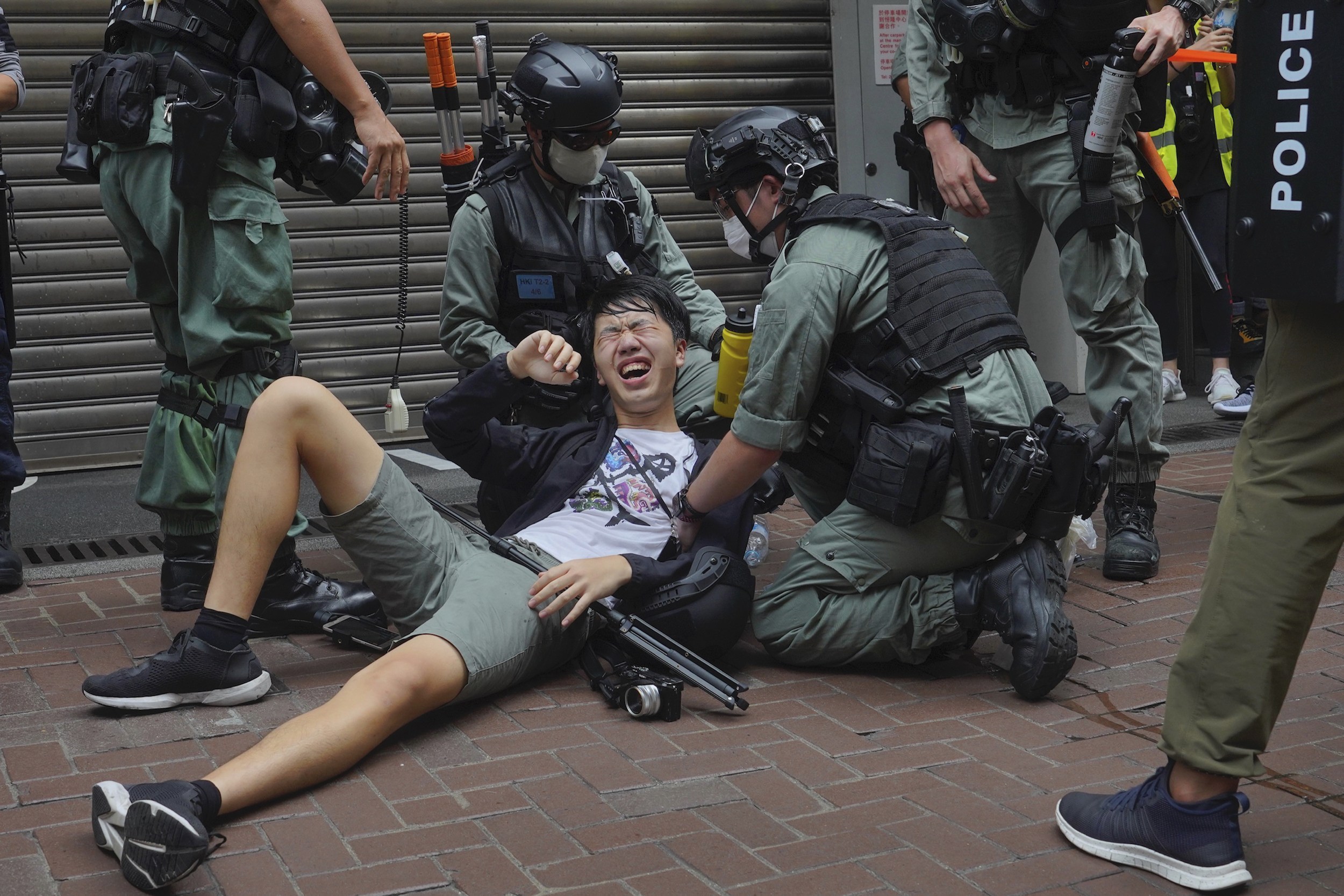 Since the imposition of the security law — which bans secessionist, subversive and terrorist activities, as well as collusion with foreign forces, with penalties of up to life imprisonment — anti-government protesters in Hong Kong, and those supporting the movement, have adapted their methods to try to make their voices heard without violating the legislation.
It was one of the first protests in Hong Kong after a feared national security law came into effect.

Among a dozen or so lunchtime demonstrators at a luxury mall in the Central business district, a man raised a poster that — when viewed from afar — read in Chinese, “Liberate Hong Kong, revolution of our times.”

The government had just banned the slogan, saying it had separatist connotations and so ran afoul of the new security law’s prohibition of secessionist acts.

Shortly after, riot police entered the mall, shooing away onlookers. They detained the man, telling him the slogan was banned. But when officers looked at the poster up close, no words could be made out. It merely had circular shapes against a contrasting background. They snapped a few photographs of the poster and let him go.

Since the imposition of the security law — which bans secessionist, subversive and terrorist activities, as well as collusion with foreign forces, with penalties of up to life imprisonment — anti-government protesters in Hong Kong, and those supporting the movement, have adapted their methods to try to make their voices heard without violating the legislation.

Before the law took effect June 30, protesters often held up colorful posters plastered with slogans that ranged from condemning the Chinese government to calling for Hong Kong’s independence. Since then, they have become creative in obscuring their messages.

Many of the protesters at the luxury mall held up blank pieces of white paper to protest against China’s “white terror” of political repression. Other posters are designed to circumvent bans on slogans. The government has not yet made clear if such forms of expression are illegal.

The law has had a chilling effect on “yellow shops” that support the protest movement. Many have removed protest artwork and sticky notes bearing words of encouragement from customers, out of fear that they could land them in trouble with the authorities.

Some shop owners, like Tan Wong, have instead put up blank sticky notes to show solidarity with the movement.

“We are doing this right now because (the shop) is private property. We are trying to tell Hong Kong people that this is the only thing that we ‘yellow shops’ can do,” said Wong, who runs Kok Kok Chicken, a Korean fried chicken store.

“If we do not persist, we would no longer be able to deliver our message to others,” he said.

Yu Yee Cafe, a Hong Kong-style diner that serves fast food, has covered its windows with blank sticky notes and even displays an origami figure of Winnie the Pooh, a playful taunt of Chinese President Xi Jinping. Chinese censors briefly banned social media searches for Winnie the Pooh in China after Xi’s appearance was compared to the cartoon bear.

“I wonder if there’s still rule of law if sticking a (blank) piece of paper on the wall is illegal,” said Eddie Tsui, one of the diner’s customers. “It’s just using a different way to express our demands. If you don’t allow us to protest that way, we’ll find another way.”

The use of blank paper or sticky notes to protest is a changing form of resistance, according to Ma Ngok, an associate professor of politics at the Chinese University of Hong Kong.

“They put up blank notes so that even if the government wants to prosecute them, there is nothing that can be used against them,” he said.

Protesters in Hong Kong have also come up with alternative slogans to circumvent the ban on “Liberate Hong Kong, revolution of our times.”

Some users quote the initials of the romanization of the eight Chinese characters in the banned slogan — “GFHG, SDGM.” Others have changed the words entirely to terms that sound similar but mean very different things. One alternative slogan now reads “Patronize Hong Kong, Times Square,” a reference to a popular shopping mall in the city.

A popular protest anthem, “Glory to Hong Kong,” has had some of its lyrics changed, with protesters replacing the words with numbers in Cantonese that sound approximately like the lyrics.

The circumventing of bans on slogans is reminiscent of how mainland Chinese internet users come up with creative ways and similar-sounding words to talk about sensitive issues without triggering censorship under the “Great Firewall of China,” where censors delete posts containing sensitive terms and make such keywords unsearchable on online platforms.

“There is a long history of censorship where we know that people will find ways to circumvent the system, no matter how you regulate,” said Fu King-wa, associate professor at the University of Hong Kong’s journalism school.

“Sometimes, censorship can backfire, triggering more people to discuss an issue because they think that if it is censored, then it must be something important,” he said.
Add Comment