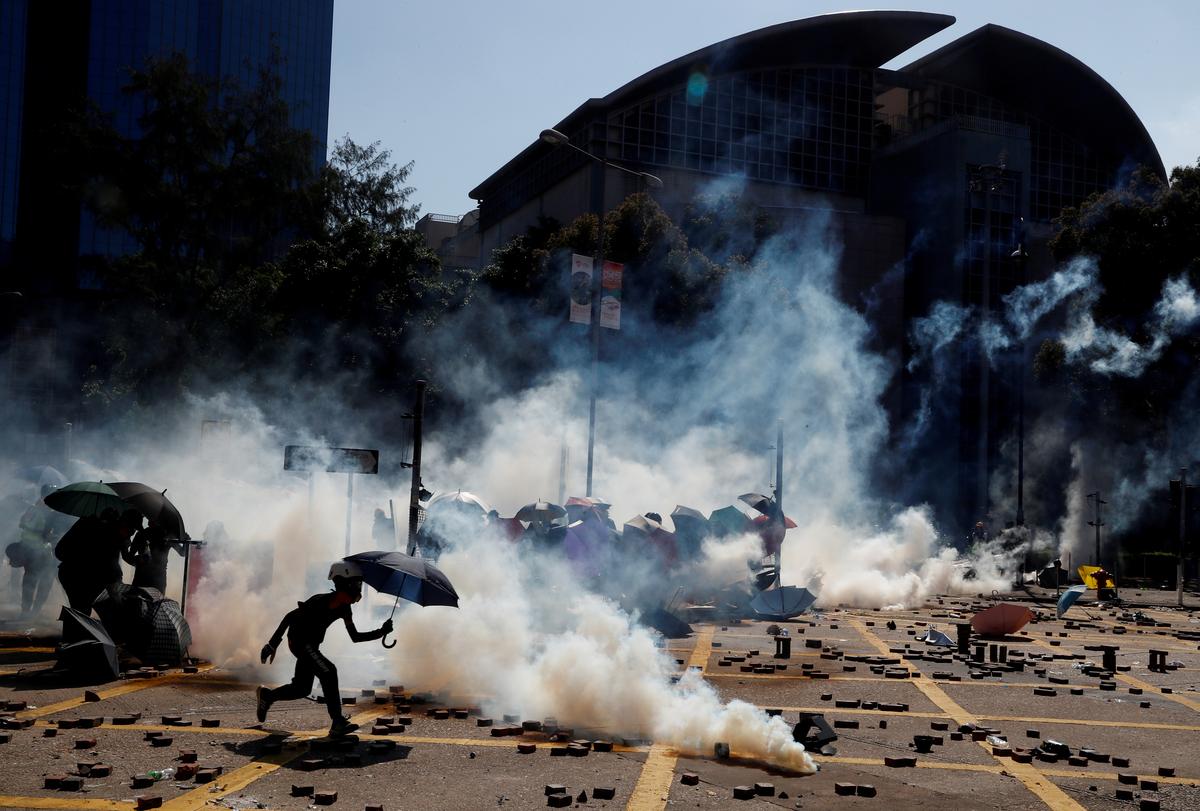 Chinese-ruled Hong Kong introduced a bill into the legislature in February that would have allowed the extradition of defendants to mainland China for the first time to face trial in courts controlled by the Communist Party.

The move touched a raw nerve, with many in the liberal, free-wheeling financial hub fearing an erosion of Hong Kong’s judicial independence and individual rights, amid fears individuals wouldn’t be guaranteed a fair trial.

The former British colony returned to Chinese rule in 1997 with promises that its autonomy and freedoms were guaranteed. But in recent years, many have been angered by a perceived tightening grip by China. The extradition law was seen as a final straw.

The first protests flared in March and April and snowballed. On June 9, an estimated one million people took to the streets. The city’s Beijing-backed leader, Carrie Lam, suspended the extradition bill on June 14 but this didn’t pacify the protesters who wanted it to be scrapped entirely.

A protester holding up an anti-extradition bill banner fell from the roof of a luxury mall and died. Protesters consider this to be the first death of the movement during a demonstration.

On July 1, anti-government protesters held a mass march, after which they stormed the legislature. Hardline activists rampaged through the building, smashing furniture and spray-painting walls and the coat of arm

The unprecedented attack marked a turning point from a peaceful, 79-day pro-democracy street sit-in in 2014 that had achieved nothing. Young protesters would use violence more often in a bid to exert more pressure on the city government, trashing government buildings, shopping malls and metro stations.

As the arrests of protesters began to mount, some began using petrol bombs to slow police advances on the crowds and to allow people time to escape.

The violence in one of the safest major cities in the world was becoming more regular. Police countered petrol bombs and rocks with tear gas, pepper spray, rubber bullets and eventually the occasional live round. A water cannon was deployed by police for the first time in the industrial New Territories town of Tsuen Wan on Aug. 25.

Weekend after weekend, streets of the city, in different places but often in the up-market Central business area and the Causeway Bay shopping district, would become a sea of flames. Tear gas billowed between the high-rises as sirens wailed on some of the most densely populated streets on Earth.

There were several injuries but no deaths from direct police fire.

After nearly two months of upheaval, with the protests now morphing into a fully-fledged anti-government movement with five key demands, including full democracy, the protesters turned their attention to the airport, one of Asia’s most spectacular aviation hubs, built by the British in the dying days of colonial rule and reached by a series of gleaming bridges.

TOO LITTLE, TOO LATE

Thousands of protesters staged a sit-in inside the arrivals hall that led to the airport shutting down for several days. The move garnered international headlines with the travel plans of thousands of foreign nationals thrown into disarray.

The protests kept up their momentum, week after week, until Hong Kong’s leader eventually formally withdrew the detested extradition bill on Sept. 4.

But many protesters said it was too little, too late.

They continued to press their other demands, including an amnesty for the thousands already arrested and an independent investigation into alleged police brutality.

Tension was also building between protesters and pro-Beijing residents, including those in one of the “reddest” pro-China districts of North Point on Hong Kong island. Chinese banks and businesses, or those perceived as being pro-Beijing, came under attack.

In mid-November, students turned several university campuses into fortresses, barricading themselves inside and clashing with riot police on the periphery. On Nov. 12, riot police at Chinese University fired more than 1,000 rounds of tear gas at protesters.

A few days later, hundreds of front-line protesters became trapped inside Hong Kong’s Polytechnic University, at the mouth of the now-closed Cross-Harbour Tunnel on the Kowloon side of the water. They manufactured an arsenal of petrol bombs and practised firing bows and arrows in the half-empty swimming pool as police blocked the exits.

The protesters battled riot police for several intense days amid fears of a bloody clampdown. In the end, hundreds of arrests were made, while scores of protesters resorted to desperate means to escape, including rappelling off bridges on ropes and hopping on to the backs of motorbikes and even trying to swim out through the sewers.

After the siege of PolyU, Hong Kong held a city-wide election on Nov. 24 that pro-democracy candidates won in a landslide with a record-high turnout.

The crisis has not only shaken Hong Kong, but posed one of the gravest populist challenges to Chinese President Xi Jinping, with some protesters calling for outright independence from China.

China denies interfering in Hong Kong’s affairs and blames the unrest on the West, specifically the United States and Britain. It has backed Hong Kong leader Lam in her efforts to quell the violence but says it will not tolerate any threat to Chinese sovereignty.

China’s People’s Liberation Army garrison in the territory has stayed in barracks since the handover in 1997. It has beefed up its numbers in the city amid the unrest and troops also helped clear protester barricades outside a barracks in November.

China has warned that any attempt at independence will be crushed.
Add Comment