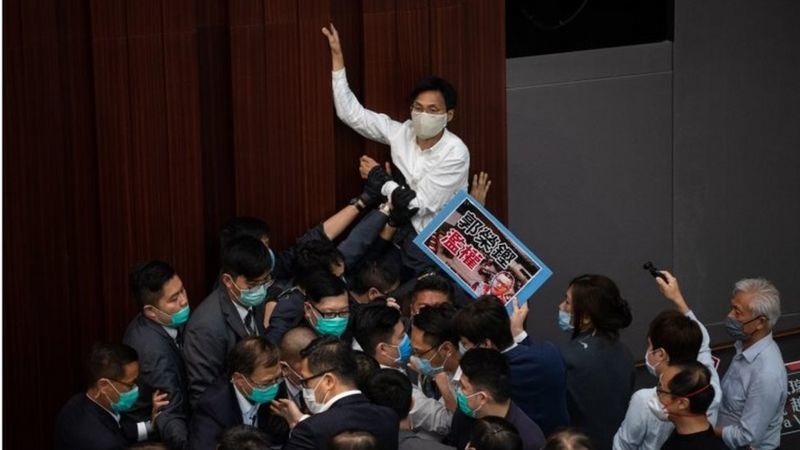 Seven pro-democracy politicians in Hong Kong have been arrested over scuffles with pro-Beijing lawmakers in the city's Legislative Council in May.

Police say they have been charged with contempt and interfering with members of the council.

The two opposing camps came to blows, with heckling and shoving on both sides, over the appointment of the chair of a key committee.

None of the pro-Beijing politicians involved have been detained.

It is the latest in a string of arrests of China critics in Hong Kong, after a sweeping new national security law was imposed by Beijing in June.

A police statement said that six men and one woman had been arrested as part of an investigation into the 8 May meeting, which descended into chaos amid a row over who should control a key committee in the legislature.

They face up to a year in prison if convicted.

They were among a group of pro-democracy legislators who tried to storm the chairperson's seat in the Legislative Council after pro-Beijing councillors forcibly installed one of their politicians as the committee leader following months of deadlock.

Mr Chu was carried out of the room by four security guards holding each of his limbs, after attempting to physically reach the chair.

One pro-Beijing politician was shown live on TV dragging Mr Chan out by his collar.

"Some lawmakers dashed towards the security guards surrounding the rostrum and made it impossible for the meeting to go on," police chief inspector Chan Wing-yu told reporters on Sunday.

"Law enforcement action is taken in accordance with law and evidence gathered during the recent police investigation... I wish to reiterate that enforcement action taken on that basis is not about the social status or political background" of those arrested, he added.

However, opposition politicians questioned why none of the legislators from the opposing side had been charged.

The Democratic Party described the arrests as "arbitrary", adding: "We will not back down in the face of an authoritarian regime."

The 8 May incident was the first in a series of confrontations in the council over who would have the power to legislate controversial bills, including one approved later in June criminalising disrespect of the national anthem.

Separately last week, teen activist Tony Chung became the second person to be charged under the new security law, which makes it easier to punish protesters, and gives Beijing extensive new powers to shape life in the territory.

The law has been widely condemned by western governments and human rights groups, with critics saying it ends freedoms guaranteed for 50 years after British rule ended in Hong Kong in 1997.

The way Hong Kong's electoral system is stacked in favour of pro-Beijing politicians was one of the central issues in last year's protests, the BBC's John Sudworth in Beijing reports.

The sweeping new national security law has come with warnings that it could be used to target future protests inside parliament, with much harsher sentences of 10 years, to life, our correspondent adds.

Lawmakers brawled in Hong Kong in May