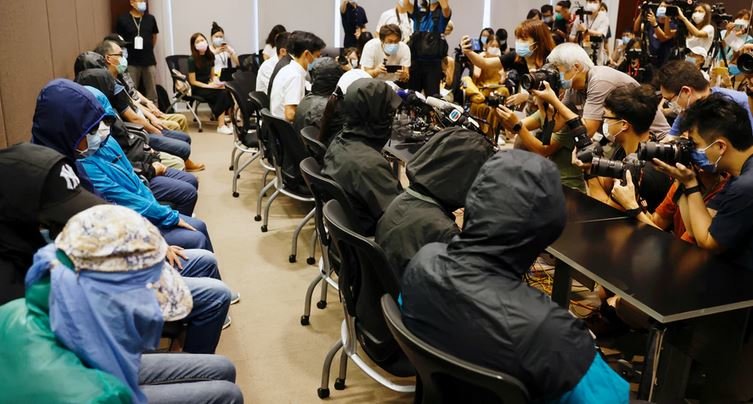 Hong Kong political activists reportedly fleeing toward Taiwan by speedboat have put Taiwanese aid agencies and organizations in a bind over how to offer support - both parties want to resist China - despite a ban on illegal entry and the absence of a legal guarantee of asylum, lawmakers and experts say.

China wants to unite with a reluctant, self-ruled Taiwan and bring under control Hong Kong’s pro-democracy protesters, who have run up against police as well as a new security law during the past year. Concerns of a continued crackdown has motivated some Hong Kong activists to flee.

Last month another Hong Kong speedboat, with 12 aboard, was stopped by Chinese maritime authorities while it was apparently heading toward Taiwan, the South China Morning Post in Hong Kong said.

Of the Hong Kong people granted residency in Taiwan since January 2019, none came illegally by sea, Taiwanese ruling party legislator Lo Chih-cheng said. Weather makes crossing the Taiwan Strait risky in a small craft, he said, and the coast guard is sure to spot any intruding boat.

If they reach land, though, help isn’t far off. Nongovernmental groups in Taipei have aided other political refugee seekers since June 2019, when Hong Kong’s mass anti-China protests erupted.

“I think Taiwan hopes that free world countries including Taiwan will do their most to help persecuted Hong Kong citizens, but when doing this we don’t need to beat a big drum and don’t even need to put government in the lead,” Taiwanese ruling party lawmaker Wang Ting-yu said in an interview September 10 with VOA.

Other Hong Kong activists have already reached Taiwan through “unofficial” channels, Wang said, and sometimes with help from entities Taiwan. Those supporters encourage activists to come safely and without compromising Taiwan’s own security, he said. They are vetted as well to ensure they are political victims, he said.

Some nonprofits doing this kind of work are “putting themselves in danger,” Wang said.

Wang would not specify the channels used, the entities involved or the vetting process for fear of tipping off Chinese officials.

For the activists, Taiwan is close, is ethnically Chinese, and has democratic self-rule. The two are about 700 kilometers apart by water. China claims sovereignty over Taiwan, but the two sides have been separately ruled since the 1940s.

“Based on considerations of safety and risk, it absolutely won’t encourage illegal entry,” he said.

Taiwan lacks an asylum law, like those in Europe or in the United States, that would spell out conditions for letting Hong Kong people stay for political reasons. In July, though, the government opened an office to help Hong Kong citizens apply for residency.

Taiwan President Tsai Ing-wen has spoken in favor of Hong Kong’s democracy activists and against China.

“We do not have any political asylum legislation available to protect those Hong Kongese to enter into Taiwan, and so it’s quite complicated,” said Andrew Yang, secretary-general of the Chinese Council of Advanced Policy Studies think tank in Taiwan.

No one from Hong Kong has applied formally for asylum in Taiwan, Lo, the ruling party legislator, said.

Taiwan’s government will help Hong Kong people in a “reactive way” because a more proactive approach would be “controversial,” he said.

“And we may put those people in a more difficult situation,” he added.

In July, the National Immigration Agency granted 715 Hong Kong people rights to live in Taiwan, a year-to-date high for a single month, according to data on the agency website. Monthly figures began surging last September as protests grew violent in Hong Kong. Taiwan granted residency to 5,858 people last year and 3,876 in the first seven months of this year.

Some apply from Hong Kong. Others reach Taiwan first as tourists, investors or university students.

Students from Hong Kong and Taiwan display placards reading “Bad laws of China’s national security" during a protest outside the Hong Kong’s Taipei office on May 28, 2020.

“I think that’s the easiest way and that doesn’t involve changing laws or doing anything in respect to the immigration law,” she said. “It’s a very simple way to do it.”

The Taipei-based Chi-nan Presbyterian Church has offered aid to Hong Kong activists over the past year, Pastor Huang Chun-sheng said.

Once the activists reach Taiwan, the church works with other nonprofits to get the new arrivals help extending their stays, securing residency permits, paying medical bills and finding homes, Huang said.