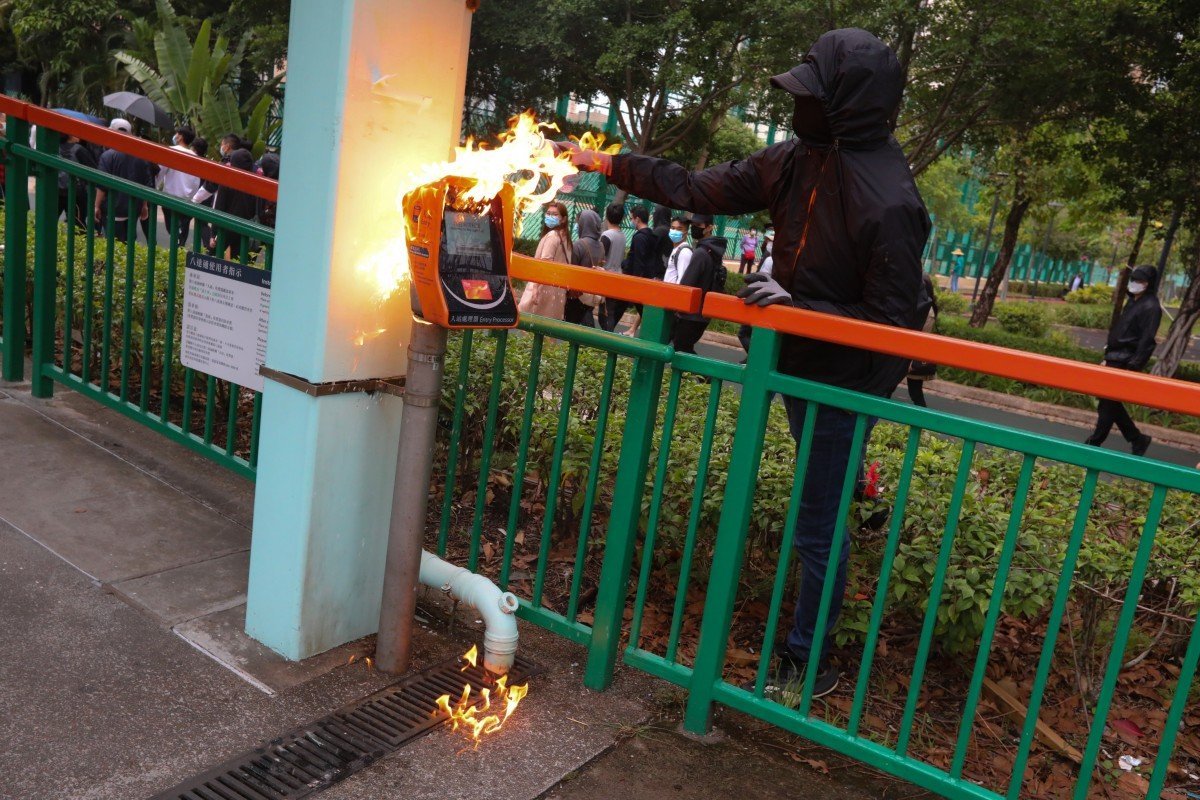 Demonstrators set fire to a card machine and threw rubbish bins onto the tracks at Tin Sau Light Rail station, in the northern town of Tin Shui Wai, while police responded by pepper spraying those involved and detained at least 20 people.

Protesters took to the streets in three districts, with small groups in Kennedy Town and Tai Po demonstrating against clinics in those areas being assigned to treat suspected cases of the virus, which causes the disease officially known as Covid-19.

Although there were no arrests in Tai Po, the Hospital Authority claimed the Tai Po Jockey Club General Out-patient clinic, one of the 18 designated clinics on the list, had been vandalised. It condemned the action and said it had reported it to the police.

Police said they received a report from a security guard at the clinic at 9.30am, and discovered some broken glass at the scene, but said the clinic itself was not damaged.

In Tin Shui Wai, about 500 people joined an officially approved rally from the Wang Yat Square shopping centre at 3pm, and marched through residential estates and public parks to raise awareness of their protest.

They chanted a mixture of slogans, including the anti-government movement’s “five demands, not one less”, and also called for local consultation on the health crisis and a “full border shutdown”.

“We are not blindly opposing the scheme, but the government has done zero explanation and zero consultation with some 60,000 local residents, many of whom are worried sick about a community outbreak,” councillor Kwok Man-ho said.

“And this is all because of the government’s stubborn refusal to close the borders with the mainland, which has brought infection to Hong Kong,” he said, adding health officials had refused to attend its three recent meetings to discuss the government’s response to the outbreak.

The coronavirus, which originated in the central Chinese city of Wuhan, has killed more than 1,500 people on the mainland, and infected over 67,000 people worldwide. In Hong Kong, 56 people have been confirmed to have the disease, and so far one person has died in the city.

Hong Kong has raised its response to the highest level of emergency and implemented a string of containment and mitigation measures, including designating 18 government clinics for treating suspected coronavirus patients with mild symptoms.

The government has faced fierce local resistance in recent days over several district-based anti-contagion measures. Last month, protesters clashed heavily with police over a plan to use a newly built public housing estate in Fanling as a quarantine site.

At 4pm, the Tin Shui Wai march reached its end point at the light rail station, but many protesters remained and threw two rubbish bins onto the tracks, and set fire to an Octopus card reader.

An MTR employee said the fire had been put out in less than a minute, before eight firefighters arrived. But riot police stepped in, and fired pepper spray at the crowd before making arrests.

“Many of us were naturally shouting anti-government slogans too, because many youngsters got politically engaged during the social movement and learnt to make our voices heard through protest actions against bad government policies, such as its current response to the coronavirus outbreak,” the 13-year-old said.

A housewife surnamed Chan also took part in the march, and said the government bore the ultimate responsibility for refusing to impose “more draconian measures” such as a border shutdown to control the epidemic.

“I am marching for me and my family’s health,” she said.

In Tai Po and Kennedy Town, small groups marched to oppose the designation of a clinic in each of the district for treating suspected cases.

“Hong Kong independence, the only way out! Completely close down the border, wait no more!” they chanted in Tai Po.
At a press conference on Saturday, Dr Sara Ho Yuen-ha, the authority’s chief manager in patient safety and risk management, said she understood the public’s concern surrounding the designated clinics.

“We will continue to communicate with them and different stakeholders to understand their concerns,” Ho said, adding that there was no timetable for activating the use of those clinics.